It will be a test market for the nation: new lounge with attractive "spokesmodels" would promote smokeless electronic cigarettes made by R.J. Reynolds. 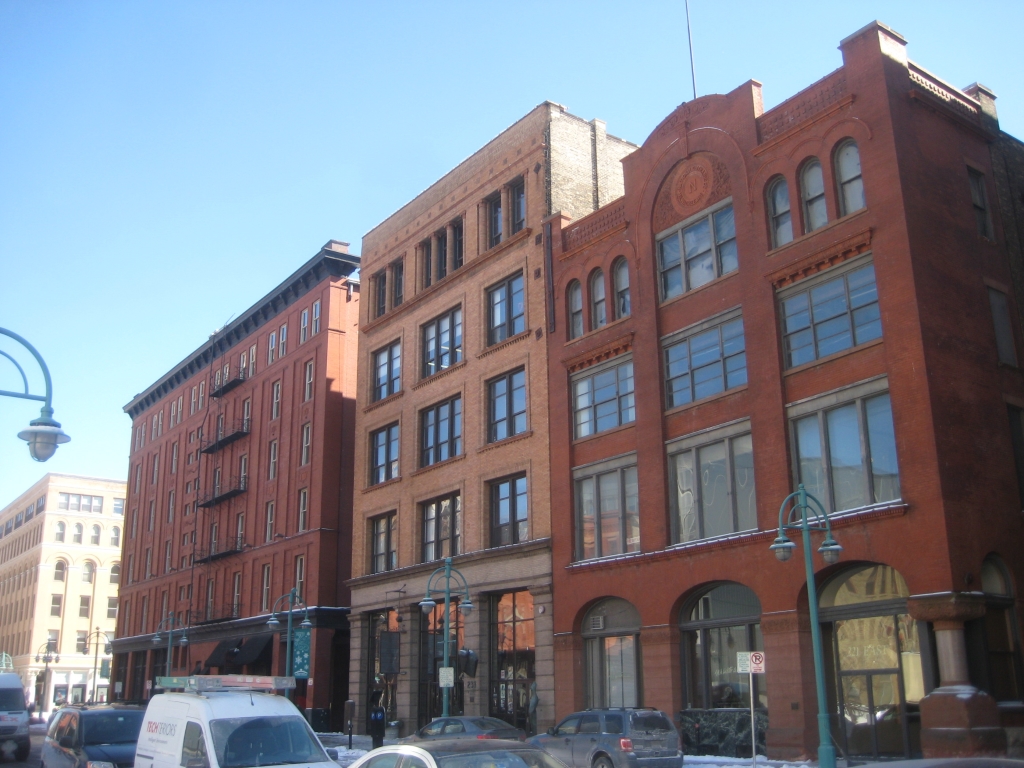 231 E. Buffalo St. is the five-story building in the middle picture. Photo by Michael Horne.

With its land becoming increasingly scarce, the space above the buildings of the Historic Third Ward is seeing new uses never anticipated by its original occupants. Two very different proposals, each with a penthouse element, were considered by the Historic Third Ward Architectural Review Board at its regular meeting on Wednesday, February 25th.

The first was a presentation to develop a deck and penthouse atop the five-story building at 231 E. Buffalo St. proposed by Media Star Promotions, whose “Experiential Marketing” offers the “100% EnvironmentTM” for a wide range of clients.

The penthouse and deck would provide that “100% environment” to “promote R. J. Reynolds products,” ARB members were told. A rendering provided by the in-house design team for Media Star was labeled “Revo Lounge,” and shows a 20 ft. by 28 ft. “raised and enclosed lounge and bar” on the roof of the building. The area would be seasonal, and for private use of Media Star clients, (or victims, considering the product).

Media Star is already a tenant in the building, which also houses Oak Lounge, with which the proposed penthouse will have no affiliation. A fire pit shown in a rendering will not be included, according to the presentation by the developer. We may be stuck with the palm trees, though. This detail is beyond the purview of the board.

The private lounge will be staffed by “Spokesmodels,” whom Media Star hires on an ongoing basis. According to its website:

“We are currently seeking spokesmodels to conduct promotions for a leading tobacco product within nightlife and retail establishments in market and surrounding areas. This part time position is ideal for attractive, outgoing young men and women who are looking for an interesting, challenging position within the nightlife and retail scene that will allow them to make good money and have fun.”

Apparently, due to its relatively small footprint and part time status as largely “non-finished space,” the rooftop deck and bar will require neither handicap access nor toilet facilities. Just a nice place to hang, apparently, sheltered somewhat from the wind, sun and stardust.

So now we know that attractive, outgoing Spokesmodels will be touting tobacco products atop the old 1896 Fred Vogel, Jr. Building, what exactly is a “Revo,” and why does it need a lounge?

Introduced in November, 2014 by Reynolds American, “Revo is aimed at smokers who don’t like E-cigarettes, but don’t want smoke.” Is this possible? So it seems: Using a special carbon tip, the tobacco within the cigarette is merely heated and does not burn, thereby leaving no ash, while still inducing a fine nicotine buzz.

This cutting-edge technology is a re-launch of a product Reynolds introduced 20 years ago. Its time has come because the firm’s research shows that the electronic cigarette market is leveling off, and some 80 percent of e-cigarette users don’t like them, but still want an alternative to conventional cigarettes.

Wisconsin will be the test market for the product. If there are “repeat sales” in the Badger State — that is to say, if people buy the product after getting their free first fix in the Revo Lounge — the company plans to roll out the product nationwide, providing employment for Spokesmodels from coast to coast!

However, the level-headed members of the ARB may not take into account their fancies about rooftop paradises staffed by Spokesmodels when making a decision about the whether to issue a Certificate of Appropriateness for a proposed project. This one appears to conform with the design guidelines. The design guidelines are mostly geared to keeping excrescences like this one out of site from the public right of way.

The thing will be set quite near the rear of the building, and would have only a limited visibility from the street. It would likely disappear entirely once the parking lot at the northeast corner of N. Water and E. Buffalo streets is developed. The design itself gave the members little to fret about. But there was some concern about the translucent material proposed to screen the loungers and Spokesmodels from the capricious winds of the low-lying Third Ward.

“It looks like a shower curtain,” said one member. “You know, I was thinking the same, too,” another commented. After some discussion, the members offered conceptual approval for the plan (with one member voting no) and the Media Star folks were invited to return in two weeks with samples of their proposed wall materials for final approval.

Back in June, 2014, the ARB granted its approval for a planned renovation of the adjoining buildings at 325-27 N. Broadway to include underground parking, upstairs apartments and a future penthouse at the old Commission Row structures, easily identifiable by the canopy hanging from them that overhangs the wide sidewalk there. For whatever reason, the third identical adjoining building and canopy-mate at 331 N. Water St. was not included in the original proposal. The first two are owned by Historic Third Ward Development, LLC., while the 331 building is still listed as being owned by Jennaro Bros., which may have something to do with the piecemeal approach. Jennaro was a produce wholesaler, as were most operators in the buildings on this block. The structures in question were the last of the Commission Row businesses to operate on the street, and they lasted until around the turn of this century. 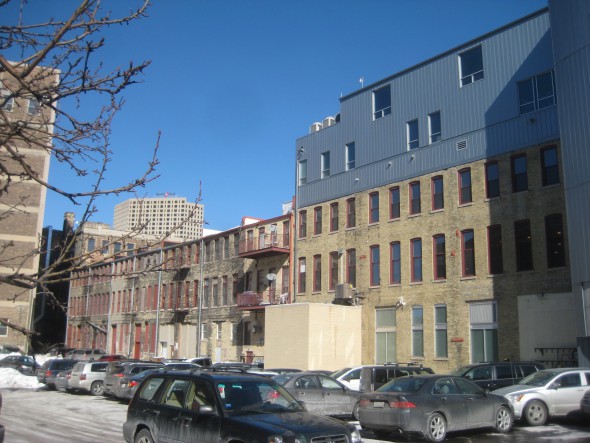 This image of the Commission Row buildings, on the left and viewed from the alley, shows where the proposed addition would be added. Photo by Michael Horne.

The committee was asked to grant its approval to include the third building in its Certificate of Appropriateness. The program for the three buildings is identical — a basement garage accessed from the alley, full floors of retail at street level, two levels of apartments with two apartments per floor (fore and aft) and a new hydraulic elevator to transport the residents. The elevator would include a space up on the roof to accommodate the proposed penthouse that is to be built there.

Architect Vaishali Wagh of Continuum Architects said that the first two buildings had already been approved for Historic Tax Credits by the National Park Service and that the new building would be added to the list.

During the review process, the architect found one door and sidelight that may be original to the building. This will be replicated elsewhere in the facade. Regrettably, no plans or clear photographs show the finer details of the structure, although the canopy for the building shows up in an 1898 photograph of the block on display in the Milwaukee Public Market just up the street.

A perspective anomaly in the renderings shown to the board made the proposed elevator structure look much taller than it actually will be; if the penthouse will be anything like the one erected down the block at 301 N. Broadway, it should blend into the scenery rather readily.

The plans are not suitably advanced to be shared with readers at this time, according to Lindsey S. Bovinet, a partner in Milwaukee View, LLC., the developer.

“While I very much want you to cover this story,” Bovinet said, “I think it’s premature at this point. I would like to have an opportunity to further develop our story and our visual materials to give you something that is really noteworthy. Can we wait a couple of weeks on this?”

Moore on the Move

The Milwaukee district office of Rep. Gwendolynne S. Moore has moved to a new location, just a block north on the same street. Swapping her 2,500 or so square foot office on the third floor of the Phoenix Building at 219 N. Milwaukee St. for her new one at 316 N. Milwaukee St., Suite 406, will give the congresswoman about 300 additional square feet of space at more or less the same rental cost per square foot, which the assessor calculates at about $12 per annum.

The most prominent tenant in the place is Coquette Cafe, although the new Holey Moley donut shop might be giving it a run.

The new office space is in a solid 1914 building long owned by the family of the late George Bockl, a pioneer redeveloper of the Third Ward. Bonnie Joseph, Bockl’s daughter, and her husband Leon Joseph are longtime supporters of Democratic candidates.

The Kimpton Hotel is well underway at the northeast corner of N. Broadway and E. Chicago St. Crews from Michel’s Construction are pounding pilings deep into the earth on the long-empty site. Many yards of fill were excavated for the foundation of the building. Much of that consisted of old bricks and charred remnants of the great Third Ward Fire of 1892. Today, a construction fence envelops the site, while a Sonag concrete truck pours concrete to cap some of the first pilings driven into the earth. A pile of other pilings lies in the excavation, awaiting a good pounding. You can hear the pile driver at work, its piston echoing through the canyon-like Third Ward. It competes right now with other pilings being driven for the freeway just blocks to the north.

Pounding Pilings at the Kimpton Hotel 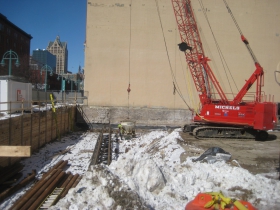 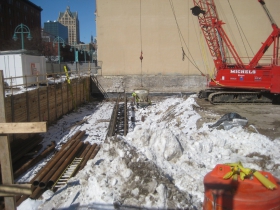 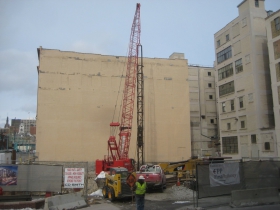 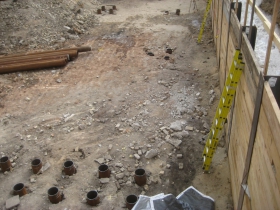 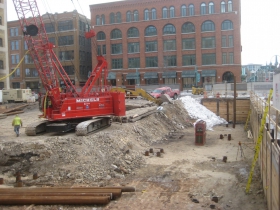 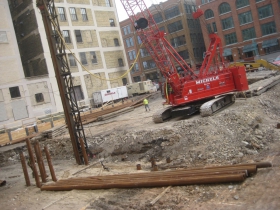 I will be celebrating my 61st birthday Saturday, February 28th, at the Y-Not II, 706 E. Lyon St. starting at 11 a.m. and continuing throughout the afternoon. The old bar is undergoing a transformation, and it is worth a look while still in the sawdust stage. Don’t worry, we’ll wipe off a place for you. All very casual, of course. But Tony DePalma has the beer taps hooked up, and that is what is important. Use Coffeetails entrance, 1506 N. Van Buren St.

One thought on “Plenty of Horne: Big Tobacco Discovers the Third Ward”