Local residents may assume that the magnitude and quality of waterfront development occurring in Milwaukee is not unique and simply part of a national trend. In truth, this development is exceptional in its scope and the degree to which it has included high-quality public amenities. Perhaps the most useful comparison is with Chicago, which also has a Lake Michigan shoreline and downtown rivers that historically formed an estuary and which has recently experienced the greatest influx of downtown residential development of any American city.  Other useful comparisons are to the waterfront areas of the three other major U.S. cities on the Great Lakes — Buffalo, Cleveland, and Detroit — which share some of the physiographic features of Milwaukee’s waterfront, as well as the industrial legacy and more recent “Rust Belt” decline. Milwaukee outshines all four cities in its water-related redevelopment. 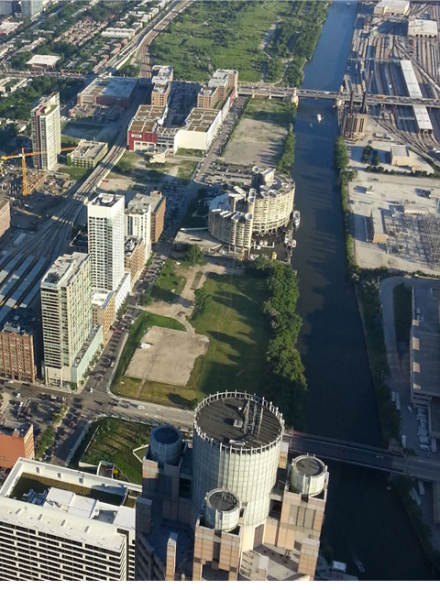 With the exception of a single building, the land bordering the South Branch of the Chicago River remains a vacant industrial wasteland. (2013)

Chicago would seem to be the city with the best potential to create a freshwater landscape equal in quality to Milwaukee, given the extraordinary amount of redevelopment that has occurred in Chicago’s Downtown over the past 20 years. From 2000 to 2010, downtown Chicago saw an increase in population that exceeded that of any city in the US (as reported in one census study). The downtown area was the focus of a high-rise residential construction boom exceeded only by New York City.  With this investment, and the near universal appeal of waterfront locations, one would expect the greatest transformation would have occurred along the Chicago’s rivers, as has been the case in Milwaukee.

And yet, even with these extraordinary factors seemingly favoring water- front redevelopment, the city has continued to largely turn its back on the portion of its freshwater landscape formed by its downtown rivers (the North Branch, South Branch, and Main Stem of the Chicago River).  Whereas the fundamental character of Milwaukee’s urban rivers has changed over the past four decades from being essentially industrial sewers and shipping channels to a restored urban fishery and recreational and residential amenity, the fundamental character of Chicago’s downtown rivers is still largely locked in that city’s industrial past, with continued prioritized use as a conveyance system for shipment of bulk cargo by barges and for discharge of partially treated wastewater to the Mississippi River system. 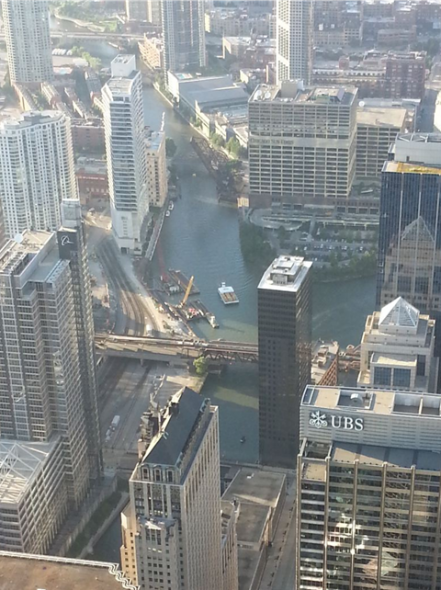 View of Wolf Point, where the North Branch of the Chicago (upper left) is joined by Lake Michigan water entering via the Main Stem (upper left) which flow then south through the South Branch lined on both sides by office towers. (2013)

The industrial character of the Chicago River peaks during winter months when up to 75 percent of the flow coming from the Chicago River’s North Branch is attributable to the discharge of treated sewage from the North Side Water Reclamation plant. The continued use of Chicago’s urban rivers as a conveyance system rather than an amenity or ecological feature represents not just a missed opportunity but something that has negative ecological impacts on Lake Michigan and the Great Lakes as a whole, with the continuous diversion of approximately 3.9 cubic meters per second of water from Lake Michigan and the rivers serving as a potential physical pathway through which invasive species (most notably, Asian Carp) could migrate from the Mississippi River watershed.

Although Chicago completed a deep tunnel system of its own in 2006 with a storage capacity of 2.3 billion gallons, the system at present is capable of capturing the discharge from only about 93 percent of the storm events that occur in an average year. Storms that exceed the design capacity are any with more than approximately 1.5 inches of rain. This results in the continued discharge of untreated mixture of stormwater and sanitary waste into Chicago’s rivers and Lake Michigan, on a scale that vastly exceeds discharges in Milwaukee (with over 11 billion gallons released during a prolonged storm event in 2008 – more than the combined total overflows from Milwaukee’s system over the previous decade). Although work is continuing on three above-ground reservoirs that will add 17.5 billion gallons of storage capacity, this work is not scheduled for final completion until 2029. 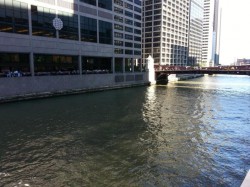 View of the South Branch, with no pedestrian access to the Chicago River in the shadow of 50- to 60-story high rises. (2013)

Chicago’s size and greater political influence are factors that may have enabled the city to postpone confronting the need to implement more technologically advanced, sustainable, and environmentally-sound methods for handling its wastewater and stormwater, and modernizing its bulk cargo transportation system. The costs for improvements necessary to address the Asian Carp threat have been estimated at $4.25 billion to over $15 billion, as reported in a 2014 article in the Milwaukee Journal Sentinel.  Based on the ongoing fiscal crisis in Chicago, these or other improvements at best will likely require several decades to compete.

The lack of physical improvements along Chicago’s urban rivers during the past 20 years, at a time during which the city experienced one of the greatest downtown residential construction booms in U.S. history, is almost shocking to a visitor from Milwaukee. Within the shadow of new residential towers, vast stretches of the South Chicago River are currently bordered by vacant land. Chicago’s downtown riverfront provides the best evidence that the type of development that occurred along Milwaukee’s rivers was by no means assured or simply a reflection of a national trend, but instead is something attributable to a unique local commitment to environmental improvement. 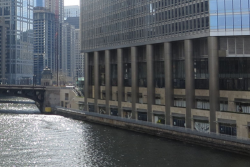 In spite of the $1 billion spent constructing the 98-story Trump Tower, public access along the riverfront pales in comparison to almost any section of the Milwaukee Riverwalk. (2013)

Although Chicago is in the process of completing a $100 million project that will greatly improve public access and amenities along the one-mile segment of the main branch of the Chicago River, this project was made possible only thanks to a federal Transportation Infrastructure Innovation Act (TIFIA) program loan announced in late 2013. Other sections of Chicago’s downtown riverfront remain completely inaccessible to pedestrians. And Chicago’s funding approach is far less sustainable than that used in Milwaukee, where 30 percent of costs have been paid for by private developers, and where public debt has generally been issued only in conjunction with new private developments that are assured of generating the tax increment necessary to pay for each segment of new RiverWalk construction. 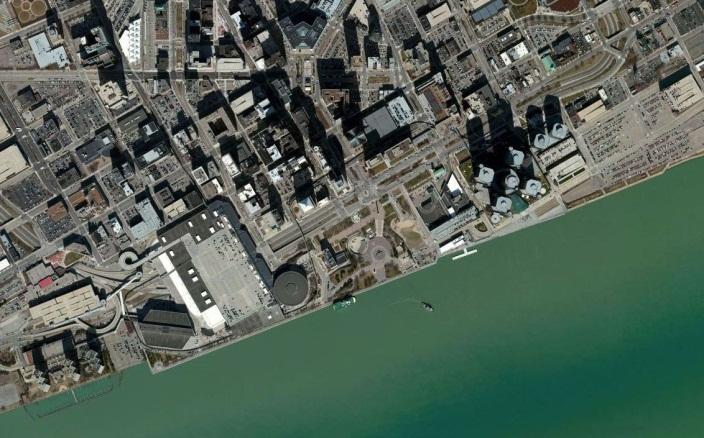 View of the redeveloped one-mile section of downtown Detroit riverfront. Photo courtesy of the U.S.G.S. 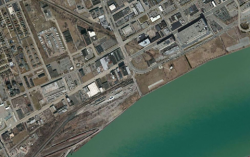 Vacant and active heavy industrial land along the 7-mile section of riverfront to the west of downtown. Photo courtesy of the U.S.G.S.

Waterfront areas on the Detroit River have been the primary focus for downtown revitalization efforts since the 1970s. These efforts included construction of the Renaissance Center, Cobo Convention Center, and Joe Louis Arena, as well as an approximately one-mile section of riverwalk.   The waterfront to the east and north of downtown also shows significant promise, with several significant redevelopment projects, a high-quality recreational/natural area in the River (Belle Isle) and much of the waterfront already occupied by residential neighborhoods. Another positive is that Detroit’s downtown waterfront (like Milwaukee’s) is not separated from the downtown by highways (as is the case in Chicago, Cleveland, Buffalo, Cincinnati, St. Louis, Seattle, and many other cities).  A third positive is that (like Milwaukee several decades ago) the extensive sections of vacant former industrial land bordering the waterfront could be more easily converted to high-quality uses that include public access than waterfront land in other cities now occupied by freeways, active industrial facilities, or infrastructure that would be costly to relocate. 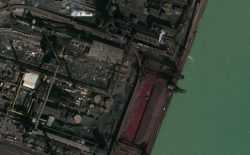 Vacant and active heavy industrial land along the 7-mile section of riverfront to the west of downtown. Photo courtesy of the U.S.G.S.

However, despite all these positives, the challenges in Detroit include all of the well-documented social, fiscal, and political problems plaguing the city as well as the sheer scale of blighted lands requiring transformation. In particular, to the west of downtown, the Detroit River waterfront is a continuous 7.5-mile long strip of vacant former industrial land or active heavy industrial facilities. Detroit also lacks the type of downtown estuaries and urban rivers in Milwaukee that have vastly expanded the length of Downtown and near-Downtown waterfront available for redevelopment.  Although Detroit’s waterfront has the potential to be the focus for a redeveloped city, it will be many decades before any comparisons would likely with what exists at present in Milwaukee.