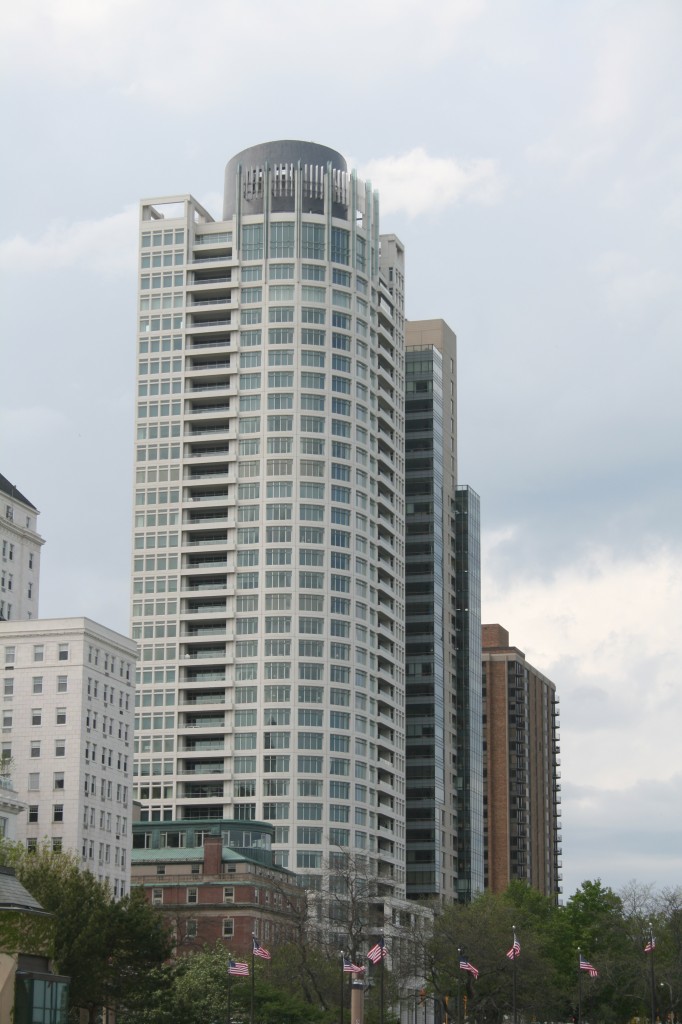 In the last decade or so, Milwaukee has added a steady stream of high-rise buildings, continuing this trend even after the real estate market crash. There was the 21-story St. John’s on the Lake Tower in 2011 and the 30-story The Moderne in 2012. But how does that compare to other big cities, I wondered.

Searching for answers, I turned to a building construction database available online at the skyscraperpage.com website. This covers nearly 1,300 U.S. cities and includes construction data for nearly all buildings at least 12 stories, or 115 feet tall. Data for each building generally includes the number of floors, principal uses, and dates of construction. I restricted my analysis to buildings of 18 or more stories, partly to reduce the effort needed to evaluate New York City (for which over 5,800 buildings are included in the database) and partly because buildings with fewer stories have less impact on the skylines of most major U.S. cities. I tabulated data for 67 major U.S. cities, with the rank of the cities based on populations as reported in the 2010 census. (I included 17 smaller cities in order to include cities such as St. Louis and Pittsburgh that may no longer rank in the top 50 U.S. cities by population, but are the principal cities of major metropolitan areas and historical centers for high-rise buildings.)

But 10 high-rise buildings completed in Milwaukee since 2000 is arguably more impressive than 13 completed during the same period in Los Angeles (the center of a metropolitan area with over 12.8 million residents), so I decided to “normalize” the data based on populations to better measure the relative intensity of high-rise construction in each of the cities. Thus, I calculated the number of high rise buildings completed during 2000-13 for each city per 100,000 metropolitan area residents in 2010. The resulting population-weighted ratios and rankings for the 15 highest ranked cities are presented in Table 2.

Adjusted for metropolitan area populations, Milwaukee’s ranking jumps from 21st to 10th place among the 67 major U.S. cities evaluated. Milwaukee’s ranking is particularly impressive given that it is not the center of a metropolitan area with 4 million or more residents (as is true for Atlanta, Boston, Chicago, Houston, Miami, New York City, and San Francisco), and is not a major tourist destination (as is the case for Miami, Orlando, and Las Vegas). Milwaukee’s “peer” cities that also lack these two key drivers for construction of high-rise buildings include San Diego, Seattle, Atlanta, Austin, Charlotte, and Portland.

The final analysis I performed was to calculate the number of high-rise buildings constructed during 2000-13 per 100,000 person increase in metropolitan area population during 2000-10.  The results for the 15 top ranked cities based on this measure are presented on Table 3.

On this measure, Milwaukee ranks 3rd among the 67 major U.S. cities evaluated – trailing only New York City and Chicago.  Interestingly, 4 of the 5 highest ranked cities, including Milwaukee, Boston, New York City, and Chicago, all had very similar metropolitan population growth rates (ranging from 3.1 to 4.0%). The significance of this measure is probably subject to debate, but high population growth rates unquestionably are more supportive of the construction of additional high-rise buildings in a city than low or negative population growth rates. The decision of Northwestern Mutual to address its future office space needs through a new downtown tower rather than a low-rise building at its Franklin campus may be an example of a dynamic that is occurring more frequently in Milwaukee than in other cities.  Milwaukee’s relative performance by this measure is exceeded only by New York City and Chicago, and is potentially unmatched by any other mid-sized U.S. metropolitan area.

To better understand Milwaukee’s performance in a regional context, Table 4 presents a summary of high-rise building completion data for Milwaukee and 14 other major Midwest or commonly cited “peer” cities.

There’s a lot of data in this table, but the bottom line is that Milwaukee ranks ahead of every other Midwest or peer city except Chicago in all categories.  Minneapolis is the only other city in the Midwest to rank even close to Milwaukee in a post-2000 high-rise building completion category.  Remarkably, more high rise buildings have been completed this century in Milwaukee than in the cities of Des Moines, St. Paul, Oklahoma City, Louisville, Kansas City, Cincinnati, Detroit, Omaha, and Columbus combined.

Nor is there reason to think this momentum in Milwaukee is slowing. The trend of one new high rise building being completed in Milwaukee approximately every 1.25 years appears likely to continue over at least the next 5 years, with the 18-story Potawatomi Bingo Casino Hotel Tower scheduled for completion in 2014,  the 18-story 833 East Michigan building and 33-story (or higher) NML Tower likely to begin construction within the next two years, and plans advancing for projects such as the proposed 44-story The Couture tower and the 19-story Bookends North development.

Milwaukee’s 21st century performance in the construction of high-rise buildings has been remarkably strong relative to other major U.S. cities, both nationally and even more so in the Midwest. And among “slow growth” metropolitan areas having 2 million or fewer residents, Milwaukee’s performance appears to be unmatched.

Why has the city done so well? Hard to say for sure. Certainly former mayor John Norquist helped put into place policies that helped jump start residential development in Milwaukee. But I’m convinced the city’s stellar performance is likely attributable to the exceptionally high-quality urban environment that has been created in Milwaukee’s downtown lakefront, and near downtown neighborhoods. Milwaukee’s peer group for this highly visible and economically significant component of the urban built environment appears to consist of cities such as San Diego, Seattle, Austin, Charlotte, and Portland as well as much bigger metro areas such as New York City, Chicago, Boston and Atlanta. Not bad company to keep.

Coming Next: How extraordinary is the proposed 44-story The Couture on a national basis?

8 thoughts on “City a National Leader in Skyscrapers”