James Pickering, as Pozdynyshev, in The Kreutzer Sonata. Photo by Ross E. Zentner.

The most unusually envisioned drama of the season belongs to Renaissance Theaterworks at the studio stage of the Broadway Theater Center.

A novella by Leo Tolstoy adapted for the stage by Irish-British author Nancy Harris.

Beethoven phrases as the haunting, hated, beloved counterpoint to memories of jealousy and masculine prerogative.

This is The Kreutzer Sonata, which runs through February 15.

It takes place in an elegant 19th century train car in an era when men ruled as lords over their wives. The solo character, Pozdynyshev, empties his pockets and his mind before us to justify his crime against her and the passion he fancies he saw between his pianist wife and a violinist who is his old friend, all suggested not just in his head but behind scrim in a hauntingly simple but perfectly tuned concept by director Marie Kohler and music director Jill Anna Ponasik.

For what he’s done and how he defends it, Pozdynyshev ought to be more  hateful than fascinating. But his thought process reveals the times and how he got away with it  – a self-possessed conceited 19th century Russian gentleman proud of his libidinous youth, fixated on his main possession (his wife), convinced all women are weak vain creatures and enraged that anyone else might act on the allure he believes he discovered.

The novella was so frank and graphic in its discussions of male attitude toward women that censors from the czar to turn-of-the-century America lined up. Suffice it to say, as Pozdynyshev’s mind strays over his wife’s bosom, that Tolstoy will never become Mike Huckabee’s favorite author.

This production ties the piano of Colleen Schmitt and the violin of Joseph Ketchum into Pozdynyshev’s visions as mimes of what he imagines is happening, and then in an eruption that overwhelms the audience with an extended excerpt from the Kreutzer Sonata (also known as Violin Sonata No. 9). The musicians are wonderful, but this is not an interlude separate from the tale; rather it’s a powerful integration of both live and taped performance that punctuates and deepens the emotional arc.

The weight falls on veteran actor James Pickering, as Pozdynyshev. He must traverse from routine chitchat to slow revelation to a possessed re-creation of his states of mind. There are many choices different actors could make in how to maneuver this extensive soliloquy and Pickering’s choice is clever for him and this audience – an  affable charm turning ugly before us and then frenzy subsiding into self-justification. It’s quite a train ride as the sound effects and music dance alongside his choices. Though Pickering is expertly focused and modulated, not every step is mesmerizing, but the whole overwhelms and creates a growing interest in the story (and don’t expect too many details here). It is all perfectly costumed and designed, precisely executed and intelligently envisioned. 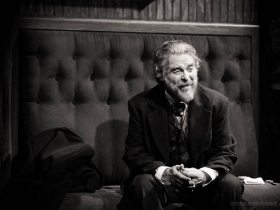 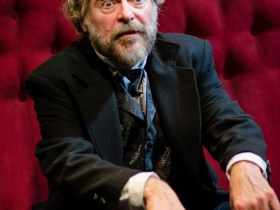 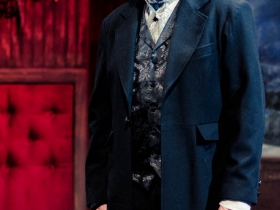 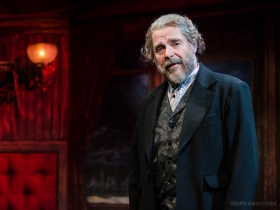 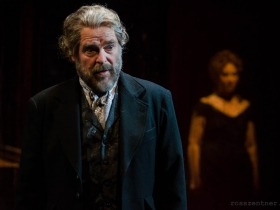 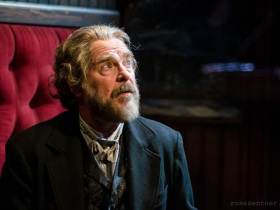