All The Fine Young Dancers

I first became aware of the Milwaukee Ballet II at last year’s Winter Series at the Pabst Theater, when the opening performance blew the audience away and was subsequently announced by Milwaukee Ballet artistic director Michael Pink to be a surprise treat performed by its troupe of younger dancers. The piece was a darkly energetic work created by the ballet’s Choreographer-in-Residence, Timothy O’Donnell, and I for one had been waiting impatiently since to see something else performed by MBII.

This past weekend was my chance, with the MBII presenting a program of new and classic works at the South Milwaukee Performing Arts Center, including a quasi sequel from O’Donnell, a new work by the choreographer entitled “…and then it rained,” which closed the program.

A little background: The MBII is a stepping-stone company for young artists who are ready to launch into the professional world of ballet. The program recruits international talent, ages 18 to 22, and throughout the year they perform in their own works and those of the Milwaukee Ballet, while also conducting community outreach programs and workshops. It’s an impressive full-time job.

My first thought as the curtains opened on “Chopiniana” was oh my gosh these dancers are so young. Granted, there were some high-school-aged Milwaukee Ballet School dancers mixed into the piece, but the collective effect of a large group of dewy-faced ballerinas caught me off guard. Heightening the effect was the costuming and general grandeur of “Chopiniana,” which from the outset brought to mind a Renaissance painting, a sort of Cinderella ballroom scene brought to life, with lots of pomp and regal movement. The company of “sylphs” were all dressed in long white tutus, and a live pianist plunked the peppy and festive score from Frédéric Chopin. The classical introduction was a nice way to see the ballerinas’ chops; to see up-close the MBII’s extensive talent and training.

“Greener Grass” followed, a brief and charming vignette choreographed by Milwaukee Ballet Company artist Isaac Sharratt and accompanied by Chopin’s Nocturne No. 2 performed by Seth Ford Young. It carried a little French je ne sais quoi, with an accordion apparent in the quartet and one of the dancers dressed as a subtle mime. I fall head over heels for any piece that features only male dancers – there’s just something particularly arresting about their interactions and movements that’s different without a female presence, without the typical partnering the men do with ballerinas. Here, Mark David Bloodgood, Gustavo Candelas, Acée Laird and Minh-Tuan Nguyen were free to charm and engage us, unfolding a cat-and-mouse dance in which each dancer compelled the next. They mimicked and challenged one another, moved in pairs and singularly and all at once, tested each other, laughed out loud, sashayed their hips. The tone was impeccable and the delivery flawless by the dancers.

But the clear runaway hit was Adam Sterr’s “Winter’s Fences” – a piece I later learned was put together in only a week by Sterr and the MBII. Music by Philip Glass was performed live on stage by a string quartet (Rachel Charles, Molly Lieberman, Tony Perez and Adam Sterr), who circled the dancers (Ryoka Chiba, Katie Rose Stephanson, Lizzie Tripp, José Soares and Thomas Seiff) throughout the piece, always present but somehow disappearing from your eye. Instead, all attention honed in on the incredible deftness and emotion of the dancers, particularly Stephanson. She flung herself across the stage with an anxious intensity that made your eyes open wide. Her counterparts washed in and out of the dance like a tidal wave, the girls dressed in barely-there body suits and the boys in only tight boxer briefs. There was nothing but anguish, an artistic flow of grief and energy that poured from every particle of the piece. The strings built to a crescendo and backed down again, Stephanson was carried by her partners and then left to her own crushing movements. At one point, a musician was ripped from his invisible role and caught Stephanson mid-air with one outstretched arm as the music cut out completely, leaving my heart shattered in the best possible way. It was a shockingly gorgeous moment in a work with an end-of-the-world finality.

Forgive me for glancing over the next two works, but both “Raymonda” and “Sylvia Pas de Deux” were the type of classical works that leave me spacing out a little bit. Not that there weren’t shining moments of talent — there were, particularly in the strange, imperial stylings of “Raymonda” — but these simply felt like “see what I can do” pieces for the MBII.

Or, perhaps it was the ants in my pants to get to O’Donnell’s “…and then it rained.” As anticipated, the stage filled with power and intensity (preceded by a gorgeous solo from Gerardo Olivares Avelar). The dancers, clad in dark bodysuits and lit by deep purples and blues, moved to a heavy, string-laden score by Max Richter. There was lots of running and large, sweeping movements, dancers lifted high in the air by their partners and turned upside down. Their bodies were mostly angles – bent knees, flexed feet, crouching down before gliding up in a body roll. It was a satisfying continuation of the MBII seen last year at the Pabst, and if this program for young dancers continues (which I certainly hope to see), I’m sure we can expect more such pleasant surprises. 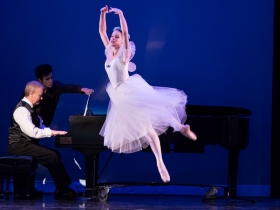 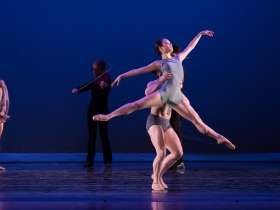 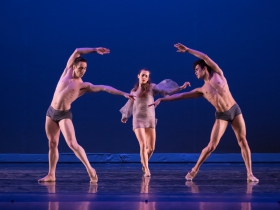 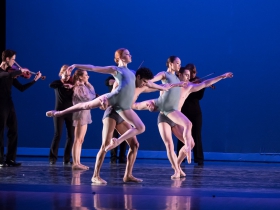 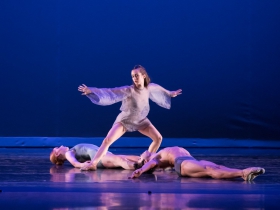 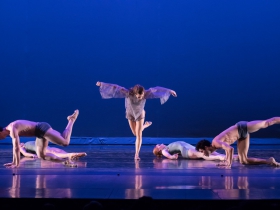 Correction: An early version of the story identified José Soares as the dancer performing the solo at the start of “…and then it rained.” Gerardo Olivares Avelar performed the solo,

0 thoughts on “Review: All The Fine Young Dancers”