Portrait of a Gay Married Couple

We’re much like any American family. Except for all the legal hurdles and headaches. 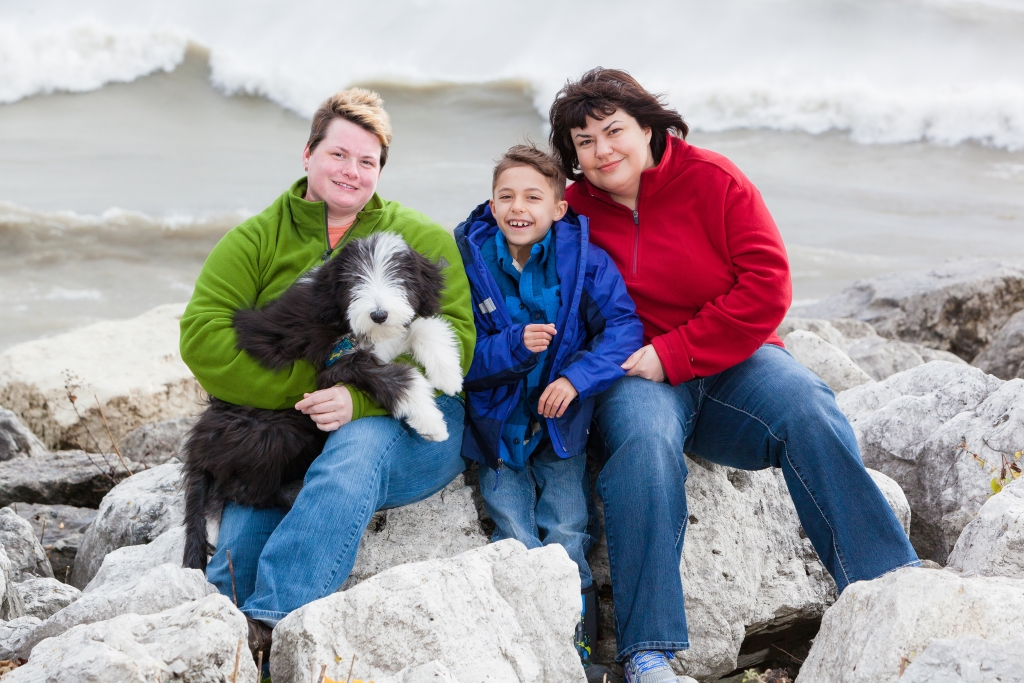 We scramble out of bed and get ready for school. We check that our son’s homework is in the folder. We get ready for work. We line up in the carpool line.

My wife goes to work at a local hospital. I work on marketing, public relations and personnel training projects. We live in a Milwaukee bungalow and our puppy never tires of chasing a ball. Soon my wife and I will celebrate our 19th anniversary. Our son is in second grade. In some ways we are like every American family. In other ways, everything is different. My wife and I are both women.

Being gay or transgender is expensive. My wife and I have spent enough to buy a new car just to give ourselves the legal protections for powers of attorney, child rights, and we still are not done spending money on legal paperwork.

Wisconsin does not offer two same gender people the right to both adopt a child.  In other states, most couples who use donor eggs or sperm automatically have both parents names on a birth certificate. Wisconsin only allows one name (regardless of the gender identity or marital status of the parents.) Some have found exceptions to the rule in Wisconsin. Others here hold legal guardianship of their own children but cannot adopt them. Imagine adopting a child or even giving birth to one, but you don’t have full legal rights to her/him.

In Wisconsin, most children who have same gender parents only have one legal parent. Many foster parents are able to have both members of a same sex couple foster a child, but when it comes time to adopt only one of them can adopt the child. With new marriage laws, some of this is changing. We will examine these situations in future columns.

Like many same gender couples we were not able to get married until a decade after we had already made a commitment to one another. We married 11 years into our relationship in 2008, in Massachusetts. We already owned a home and had a child. Marriage wasn’t possible earlier when it would have been more natural to progress from that milestone to parenthood. Even when marriage became possible in the U.S. for same sex couples, we had to fly to another state to marry.  While it was legal there, it didn’t offer us any protections in Wisconsin where we live. We married hoping it would give us another layer of protection for our child.

For years our marriage gave us no rights at all, as Wisconsin didn’t recognize it. After June 2013 when parts of DOMA (the Defense of Marriage Act) was struck down, we were considered married in the eyes of the federal government but not in our home state until the marriage equality victory on Oct. 6, 2014. At that time United States Supreme Court denied review in all of the marriage equality cases pending before it. The decision of the 7th Circuit Court of Appeals stood, making marriage legal for all couples in several states including Wisconsin. Marriage for all –including same gender couples was legal.

We assumed that win meant years of doing our taxes eight ways, hiring expensive accountants, mistakes made with our payroll and constant worry about being compliant with confusing laws —  was over. Sadly, we have found it is taking many regulatory systems a while to catch up.

We are still sorting out what it means to have our marriage legally recognized. Since last year we were considered married by the Federal Government and not on the State of Wisconsin, we are still looking at past years’ tax returns — which we can amend to match our now recognized marriage back to 2010 (even though we were married in 2008, the law is only letting us amend up to 2010 for tax purposes.) This is a financial and tax nightmare.

Children’s rights were of great concern to Judge Richard Posner at the 7th Circuit when in making the ruling for marriage equality in Wisconsin. He summed up the states’ position saying: “Heterosexuals get drunk and pregnant, producing unwanted children; their reward is to be allowed to marry. Homosexual couples do not produce unwanted children; their reward is to be denied the right to marry. Go figure.”

If we could have married in our home state we would have married sooner. Now that is an option. Couples are trying to figure out which businesses are prepared to welcome LGBT celebrations with sensitivity. (Yes, the change in law will stimulate the state’s economy.) Other couples are trying to figure out if they should wed after being together for decades. 2015 will likely see a surge in the number of nuptial celebrations.

Sometimes people’s hearts change but the laws don’t catch up. In Wisconsin, the laws need to be addressed to ensure the rights of gay and transgender people as equal citizens. In future columns, we will explore such issues.

Denise Cawley, is a principal at Circore Creative, a marketing and public relations firm and has worked with groups like Equality Wisconsin and the ACLU to promote LGBT rights.

3 thoughts on “LGBT Life: Portrait of a Gay Married Couple”