An Artist Who Speaks in Whispers

A lovely retrospective of the remarkable 45- year-­career of Milwaukee artist JoAnna Poehlmann.

Some years ago I took a group of high school students to see the studio of artist JoAnna Poehlmann. My quick-to-bore, Milwaukee Public Schools, teenage art students looked around skeptically at the museum-like collections and arrangements in the quaint Victorian home of the “little old lady artist,” as they saw her. Then Poehlmann pulled the frozen birds out of her freezer to show the specimens from which she worked. That did it. It was a “wow” moment for those kids, they realized this was life-and-death stuff, what “working from direct observation” could mean. It gave them respect for her work and heightened appreciation of the natural world around them.

The tradition of still life painting that sprang from the Protestant Reformation in the 17th century was a meditation on objects that was intended to push viewers to reflect on life’s transient nature. Those frozen birds were once alive. But Poehlmann’s meditations are joyous momento mori. There are chicken bones in the work, but none of those deathly-looking skulls.

Using objects from nature, observed and collected over many years and arranged museum-like in wooden boxes or copied and painted, Poehlmann continues in the tradition of the Northern Renaissance artists she also pays homage to in her current retrospective (her 3rd and most comprehensive such show) at RedLine Milwaukee gallery. “JoAnna Poehlmann: Now & Then” covers the past 45 years, and contains 382 objects reflecting the life’s work of this remarkably productive and subtly innovative artist.

As John Shannon remarks in one of the essays in the show’s catalog: “As with some people who speak with a quiet voice, Poehlmann is an artist of whispers.” Her work cannot be seen 60 feet across a museum or gallery. The viewer has to get in close, and then, what might seem merely charming illustrations reveal more. These are intimate and thoughtful works which require the viewer to take some time and look closely (and sometimes read, as Poehlmann often uses text) to fully appreciate them.

I was struck by the beauty of these pieces. Much has been said about Pohlmann’s exquisite drawing. Many are trompe l’oeil (fool the eye) works and combine actual objects with drawings. These super-realistic images are reminiscent of Victorian botanical prints and harken back to the collections of natural objects popular during that time. Poehlmann’s works also include sculptures, collages, artistic books and boxes. The show is organized both chronologically and thematically, in a way that reveals Poehlmann’s artistic process and a glimpse into that lovely Victorian studio/ home. Taxidermy animals and birds and collections of mushrooms, feathers, twigs and bird eggs are juxtaposed to watercolors and drawings of the same.

Text is an important part of her work too. Barbara Monger’s catalog essay notes that Poehlmann has 47 books of quotations which she draws on in her work. Her titles are often puns and sometimes corny, but somehow winning. Her homage to British artist Francis Bacon, for instance, is entitled “Bacon, lettuce and tomato, hold the mayo.” Poehlmann has works in series based on her collections and many ideas she’s exploring at the moment. She told longtime Milwaukee Art Museum education specialist Barbara Brown Lee that ” I have all these ideas in my head. And I’m afraid I’m going to run out of time.”

Born in 1932 in Milwaukee, Poehlmann was recognized by a teacher in grade school as a potential future artist. Her parents were always supportive and she began Saturday classes at the Milwaukee Art Institute. She credits the Dominican nuns at St. John’s Cathedral where she went to high school, for the discipline in her approach to art. Family summer vacations were spent in Northern Wisconsin near the Nicolet Forest. Here she spent time in the woods, observing the creatures and plants. After high school Poehlmann attended Layton School of Art, the precursor to Milwaukee Institute of Art and Design, which graduated a number of outstanding artists during its time. Poehlmann was greatly influenced by her teacher at Layton, Karl Priebe. Priebe, she has recalled, took his students to the zoo and the Public Museum to work from life and from specimens, and to “look, look, look!”

After graduating from Layton Poehlmann straddled both the commercial and fine art world until 2000 when she was able to focus on fine art exclusively. Her illustrations appeared in Hallmark cards and were done for such companies as Chapman’s Department Store, Boston Store, Jack Winter, Junior House, Reliable Knitting and Hansen Gloves. She did children’s book illustrations for Western Publishing in Racine and by 1958 landed at the Milwaukee Public Museum, where her job was painting dioramas in small boxes which is reflected in her later work.

Poehlmann’s work has the recurring themes of acutely observed nature reminiscent of the Northern European Renaissance artists. Albrecht Durer is an often mentioned influence, but there’s also a Dada side to her work from Marcel Duchamp! Language and image combine in her work to create humorous, thought-provoking juxtapositions

Poehlmann pays tribute to many great artists and is kind of sponge for words, quotes, poems as well as objects and images. Her work is both conceptual and approachable because of the craftsmanship in its creation. The art is almost defiantly engaging and well, beautiful! Which is not a quality found in much of the work currently considered relevant. Undaunted by that, Poehlmann has stayed true to who she is, continuing on her own path of observation, reflection and association. She has not succumbed to the lure of the latest art fashions, to the predilection for disturbing, provocative or raw images. Hers is a quiet, thoughtful voice that may still be speaking to you after you leave the gallery.

I should also note that for a small gallery, Redline has created a gorgeous catalog for the show with three insightful essays providing thorough descriptions and background information about the artist and her work. Poehlmann deserves no less. 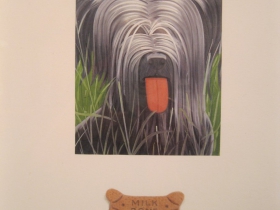 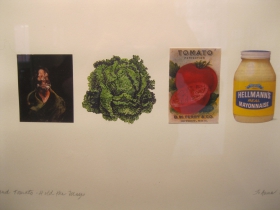 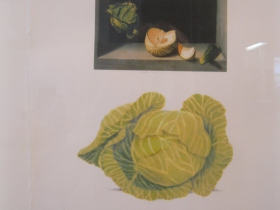 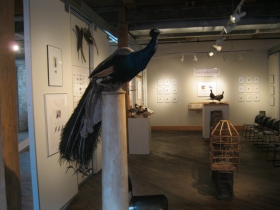 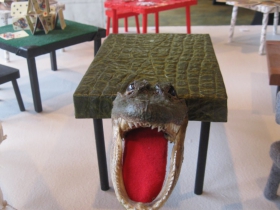 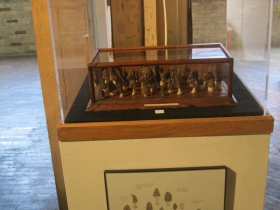