OnMilwaukee.com co-owner Jeff Sherman and his wife have a Colonial home in the suburbs, but he tries to downplay this.

The Village of Shorewood, with just over 1.5 square miles of area is said to be the most densely populated community in the state of Wisconsin, with about 9,000 residents per square mile. It was served by streetcar in the late 19th century, when it was a popular tourist destination for people who wanted to get out of the city for an afternoon at Luedeman’s Amusement Park, (now Hubbard Park). Back then this was out in the country; the Milwaukee River and Lake Michigan, which define Shorewood’s west and east boundaries, were lined with large estates and farms.

Traveling north along busy N. Oakland Ave. today the change from Milwaukee to Shorewood is imperceptible, save for minor variations in street, curb and gutter design, signage and lighting.

Many of the structures are built right up to the sidewalk.

So, in a way, Shorewood is not a suburb in the cul-de-sac sense of the word, but in another way it very much is a suburb, with a quaint village-style government, its own library, schools and police department and fire protection from the very suburban North Shore Fire Department, one of the region’s few intergovernmental agencies.

Then again, the village has numerous multiple family buildings — some ten stories tall — which is more urban than suburban. But the tallest occupied structure in the village is St. Robert’s Catholic Church, the steeple of which pierces the sky.  New development includes mixed-use, multi-story buildings that would generally be anathema in the North Shore. It’s easy to get to by bus — very urban.

And, it tends to vote Democratic, which is hardly suburban. (Mary Burke got 72 percent of the vote against Scott Walker earlier this month.) On the other hand, Shorewood was the childhood home of Chief Justice William Rehnquist, who was very Republican and very suburban.

But the community shows its urban, Democratic side in that it never bothered to rename its generic Shorewood High School after its distinguished native son. In fact the Zucker Brothers of Hollywood fame, likewise locals, have a better shot at that distinction.

Furthering the suburban / urban paradox, it calls itself “One of Wisconsin’s Great Urban Villages.” Shorewood has a 100-property Business Improvement District that is “Diverse, Dynamic and Distinctive.” Many of the businesses lack parking, yet are doing fine. That’s urban.

Since 2013, this urban suburb has been the home of Jeffrey Sherman, who is known as a co-founder (with Andy Tarnoff) of OnMilwaukee.com, the “hyperlocal, independently‑owned for 16+ years, digital only,” website that calls itself “Milwaukee’s Daily Magazine.”

However, Sherman, a Wauwatosa native, still claims Milwaukee as his residence on his Facebook page. He kind of fudges the issue on his OnMilwaukee bio, where, as he writes, “he owns a condo in Downtown and lives in greater Milwaukee.” (The one bedroom, one bath, city condo, now assessed at $180,000 was purchased in 2004 for $207,000.)

For a guy who makes his living constantly touting the greatness of Milwaukee, “OnShorewood,” just doesn’t have the right ring, does it?

The move of Sherman, his wife Stephanie Otto Sherman (former owner of the Lela Boutique in the very urban Historic Third Ward) and their two children coincided with the children nearing school age, which is often when couples decide they’d prefer suburban schools.

The 1,341 square foot home is even smaller than the Shermans’ downtown condo, and likewise has only one bathroom, but it has three bedrooms, sparing the need for half the family to sleep on the living room sofa.

There is a basement of 690 square feet, a 700 square foot first floor topped by a 641 square foot second floor, beneath an identically sized unfinished attic.

The home is served by a water heater installed in 1999 (getting old!) and has central air conditioning for those days when the prevailing winds do not make it “cooler near the lake.” The warm air heat is powered by gas.

The assessor says the home’s kitchen is “good,” while the bath and the remainder of the interior merit “average” ratings. Overall, the assessor gives the place a “C+” grade. This might sound a bit low, but then again, the Village of Shorewood is quite picky, mind you. (As the village neared its century mark, and with a large inventory of older homes, Shorewood mandated pre-sale building inspections as a means to preserve property values in the community.)

From the street, the Sherman home is a study in symmetry, with a central window poised above the building’s entry, flanked by windows on either side. The garage has an alley entrance, which is not a commonplace in this village. A curiously winding walk leads to an access door of the garage. The entrance to the residence, like the front one, is centrally located. There is even a milk chute right next to the door — talk about an anachronism!

The symmetry extends to the landscaping in the front, in which foundation plantings are arrayed like pillow cushions on a red-dyed shredded bark sofa. The facade is marred by a downspout running near its center, collecting runoff from the roof and the pedimented-porch and discharging it right onto the front lawn. An ornamental crabapple tree — a relic of an earlier ethos in landscape design — has been subjected to saw and shears rather haphazardly over the years. It is now time for the ax to do its deed.

How Milwaukee Is It? The residence is about 4.6 miles from Milwaukee City Hall and 4.65 miles from the downtown offices of OnMilwaukee.com. 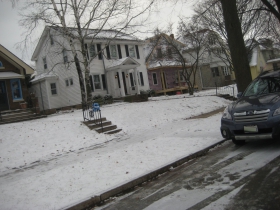 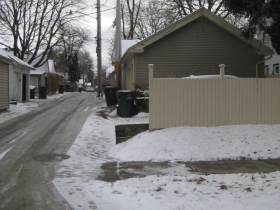 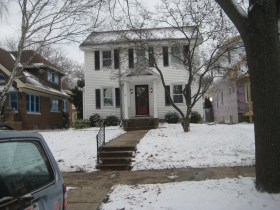 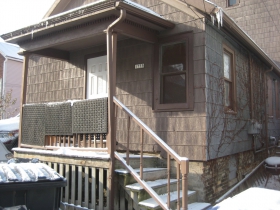 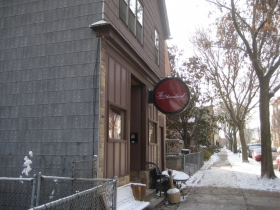 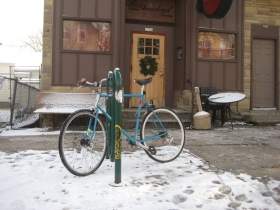