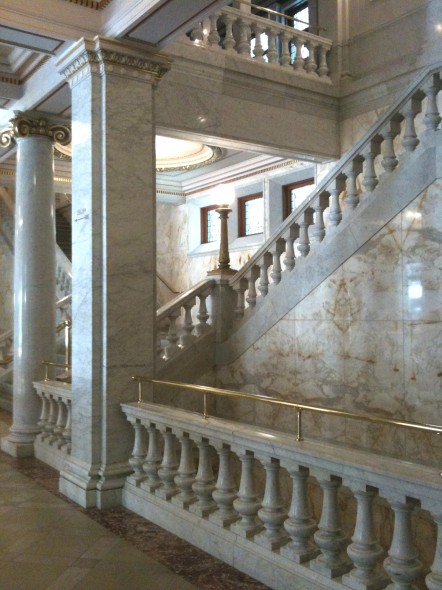 The We Energies public service building which was the hub of the interurban network.Photo by Jeramey Jannene.

California’s governor Jerry Brown signed into law a bill banning plastic bags in the state this year. The move would cut the state’s landfill accumulations by three percent.

“But construction debris consists of 20 percent of California’s landfills,” Donovan Rypkema, principal of PlaceEconomics, a Washington D.C. based real estate and economic development consulting firm told an audience of 200 Wednesday evening.  “Historic preservation has appropriately been called the ultimate in recycling,” a Rypkema study has noted. New construction creates four to seven times the debris of remodeling.

Historic preservation could play a “catalytic role” in the greening of America, he added.

Historic Building Reuse: A Catalyst for Revitalizing Neighborhoods, was the third of ten planned discussions of the many facets of historic preservation and redevelopment. The event was hosted by the Milwaukee Preservation Alliance and the Historic Preservation Institute of the  UWM School of Architecture and Urban Planning.

Professor Matthew Jarosz was the host of the evening’s events, and told Urban Milwaukee before the program that Rypkema was a “nationally and even internationally known speaker about research that demonstrates how catalytic and powerful retaining historic buildings is. It is a very important tool.”

Rypkema, in his address, said officials should include a jobs component in calculating the costs and benefits of historic reuse, and that rehabilitation can save impoverished neighborhoods as well as provide jobs for residents.

He also was critical of proposals for wholesale demolition of abandoned properties: “Whenever you tear down an existing house you are removing a unit of affordable housing,” he said, adding that it is not economically possible to build new housing that is as affordable.

The event was held in the Art Deco We Energies – Public Service Building Auditorium, 231 W. Michigan St., and was called by Jarosz a “laboratory for the city” for heritage retention. This and future presentations are expected to be held “in great heritage places” like the 1902-1905 headquarters of the utility.

Rick James of WE Energies talked about the history of the grand building, a four story structure “with enough steel in it to support another eight stories.” A 1920’s “remuddling” had led to the loss of many of the building’s features, which have been restored in recent years. At one time, it was the busiest interurban train station in the nation, when domestic electricity was just a side business for The Milwaukee Electric Railway & Light Co.

Ald. Jose Perez, a panelist, suggested a clearer picture of the historic preservation process would be of benefit to the city. His south side district largely predates the city’s zoning code, and is rich in old structures that need redevelopment, as well as an integrated approach to it.

Fellow Ald. Robert Bauman suggested that a historic district for the North Side might be a catalyst to develop that area rich in worker and middle class housing. Randy Crump, an attendee had mentioned that while his N. Sherman Blvd. neighborhood was doing well, he was concerned about things on N. 42nd St., just a block away.

Bauman said that 25 years ago there was “no market for homeowners” in much of his district. “On West State street, 21 of 31 homes were rooming houses. Now there are none.”

Of course, this preservation which returned homes like that of House Confidential honoree Charlie Fox into single- or two-family status did impact some poor folks.

“Low income people were kicked out of rooming houses, no doubt about it,” Bauman said. “But we replaced a house with 25 people with one with three people,” — leading to a more stable and less chaotic neighborhood.

Rypkema agreed that “rehabilitation breeds more rehabilitation,” and that one “small job” could add millions of dollars of additional development.

The audience included a number of Milwaukee’s most prominent players in redevelopment, including David V. Uihlein, Jr., principal at preservation architecture firm Uilhein Wilson and owner of the historic McGeoch Building. He was joined by cousin Charlie Trainer, whose historic redevelopment projects include the Curry-Pierce building among many others. Also in the audience was Sally Peltz and Patti Keating Kahn, owner of the historic Railway Exchange and Colby Abbot buildings, along with Amy Grau, City Historic Preservation officer and House Confidential honoree Paul Jakubovich, PR man Jeff Bentoff and Yance Marti, a civil engineer for the City of Milwaukee. Lindsey Bovinet, owner of two buildings on the 200 block of N. Broadway also made an appearance, as did Keith Stanley, a panelist representing the west side of Milwaukee, and Geoff Grohowski of the preservation alliance. Keith Stachowiak of Uihlein Wilson sat with Laura Lee Ricci at one of the many tables in the large hall. H. Carl Mueller and his staff from Mueller Communications were also on hand. Panelist Leo Ries of LISC joked that “LISC stands for Leo Is So Cool.” (Actually it stands for Local Initiatives Support Corporation.”)

Catering for the reception held before the event was by Zilli. 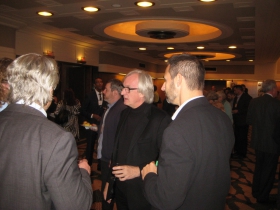 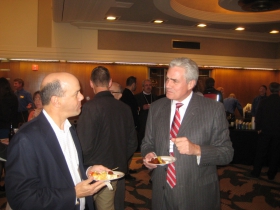 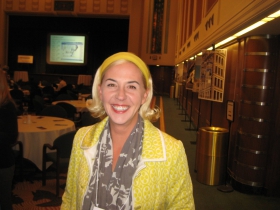 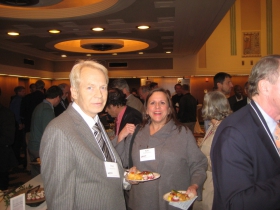 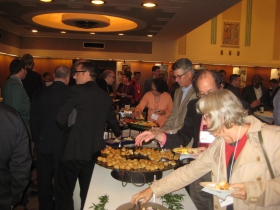 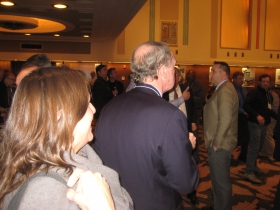 One thought on “Plenty of Horne: Conference Touts Historic Preservation”