Giant earth moving machines are now operating in the Milwaukee River  downstream of the former dam just south of North Avenue. The machines are expanding a .6 acre fish spawning habitat by half its size again. During the past two days, convoys of trucks have delivered massive boulders and dumped them down the west bank of the Milwaukee River at the site of the Milwaukee River Greenway Gateway, in the 2100 block of N. Riverboat Road. The rocks provide a path for equipment to reach the river, where front-end loaders scoop up mounds of the material for the new reef, dumping it some yards offshore. The work continues at this writing, and can readily be seen safely from the Humboldt Bridge, as well as across the river from Cesar’s Park.

The Wisconsin Department of Natural Resources project is expected to “further improve fish and aquatic life habitat along the lower Milwaukee River, roughly bounded by the former North Avenue Dam and N. Humboldt Avenue,” according to a letter written to riparian property owners by Brad Eggold, the Lake Michigan Fisheries Supervisor:

“As a property owner on the Milwaukee River you may appreciate that the environmental quality of the Milwaukee River has improved significantly over the last several decades. Prior to these improvements, only carp and other forms of aquatic life tolerant of a degraded environment were able to survive. Today, the river experiences outstanding runs of trout and salmon in the spring and fall. … The DNR and its partners are continuing efforts to restore walleye, lake sturgeon and other fish and wildlife populations once decimated by pollution and habitat loss.”

The initial 0.6 acre reef was constructed in 2006, and has been “discovered” by many a pleasure craft that has run upon it during these years of low water levels. The earlier reef is being modified, and is being expanded by 0.3 acres during the current project. Funding for the project comes from the Fund for Lake Michigan and the DNR.

“The project would not be possible without the assistance of the River Revitalization Foundation, Eggold of the DNR wrote. “All of the work will be completed on land and river bed owned by the RRF.”

The reef is but one project currently underway on the west bank of the river at the site. A pedestrian path is being graded and surfaced running under the Humboldt bridge and is being extended to the dam and beyond. It will connect with the bike path on the west side of the river north of the dam, and provide a very important link. With its addition, and that of a segment just downstream from the Humboldt Bridge, it will provide a near-continuous riverfront trail to Downtown.

Our Photo Gallery documents the many changes at the Greenway Gateway over the past years. 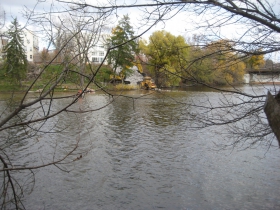 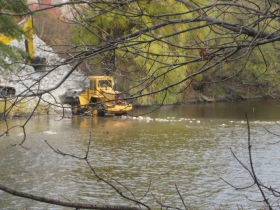 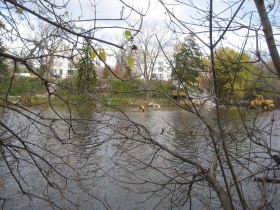 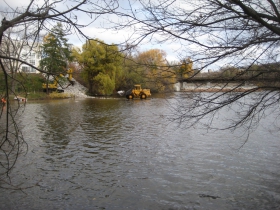 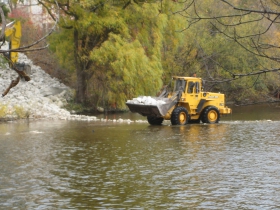 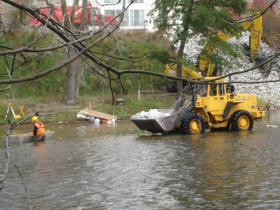