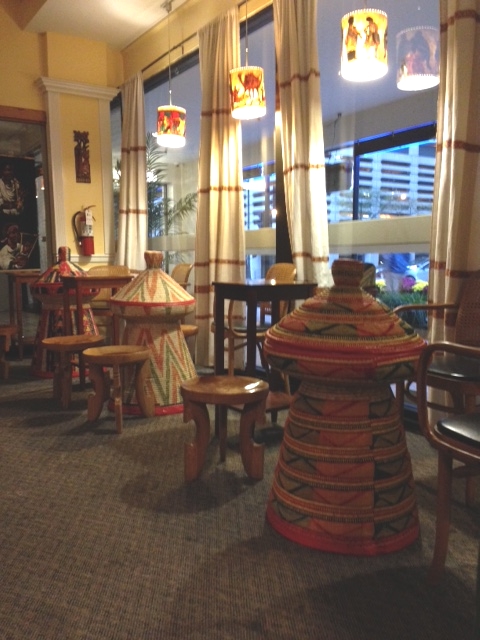 Welcome to Alem Ethiopian Village: No spoons, no forks, no silverware – eat with your fingers and have fun!

Well, actually, they’ll give you a fork, if you ask for one because you’re as lame as I am (sigh) at eating your food without it. My date had no problem: she handled her meal like a pro using only the Ethiopian bread called “injera” to wrap up her food and eat it.  Almost exactly resembling French crêpes in taste and texture, injera is used not only as tableware for eating one’s meal in Ethiopia, but they also use it as a tablecloth!  Here at Alem’s Ethiopian Village on East Wisconsin Avenue in downtown Milwaukee, they don’t actually use it as a tablecloth, but they do use it as a serving medium, with extra portions rolled up lining the large, wide serving platter.

I must have passed this place hundreds of times, each time telling myself that I had to go in some day and check it out. Well, that day finally came. Stepping into this restaurant, one enters Africa. Though I was not too crazy about the stained carpeting, the authentic Ethiopian seating that’s available, though limited, made up for it. Traditional western tables and chairs are more plentiful, but we opted to dine Ethiopian style because we got there early enough.

The menu here is a pretty extensive, including many meat, vegetarian and combination offerings with names that are foreign to most westerners. But they make ordering easy by numbering the dishes. Appetizers are A-1 through A-4, lamb dishes are L-1 through L-4, and so on.

Fortified by an Ethiopian-brewed St. George beer ($4.50), I started things off with ground beef-stuffed “sambusas” ($4.75). These come three per an order and are like fried turnovers, or large Indian samosas.  You can also get them stuffed with lentils. The menu warns that they’re spicy, but not in my opinion. They were certainly savory and I gobbled down all three. My date opted for the chilled vegetable-and-Ethiopian-bread salad called “yetematim fitfit” ($3.75). I had a taste, and I’m not sure if I like the soggy Ethiopian bread pinwheels in the salad. And we only found out it’s served chilled after the order came to the table – there’s no mention of this on the menu. But the spicy-red, Ethiopian sauce it came dressed in was superb: exotic, tasty and spicy.

For our dinners, we opted for traditional Ethiopian service. So our meals came out on a wide platter served on a huge, round injera -like a placemat made of crepe-like bread — with additional rolls of injera bread placed around the platter. My date, who is pescaterian, was disappointed that the restaurant only serves seafood on Fridays and Saturdays (we came on a Wednesday). So she ordered the vegetarian combination ($13.25) consisting of spicy split lentils slowly cooked in the Ethiopian red pepper sauce, collard greens delicately steamed with fresh garlic and pepper, yellow split peas cooked in specially flavored mild sauce, steamed vegetables (cabbage) cooked with onions, fresh garlic and ginger, and more split peas which are milled and slow cooked. Although there was some repetition with the split peas, each dish had its own distinctively exotic taste and texture.

I ordered the “yebeg keay wot” ($13.25) made of tender lamb chunks braised in the spicy red-pepper sauce with onion and assorted spices. The meat was perfectly tender and, when combined with that Ethiopian pepper sauce, was rich and exciting (my date even had a little taste, it was that good!). I also opted for an order of the spicy split lentils and collard greens. Those came with the lamb for the same price.

Though the dessert menu offers everyday treats, like Tiramisu ($3.25/slice) and Cheesecake ($3.00/slice), we of course, had to round things off with a round of the famous Ethiopian coffee! It’s served by the American-sized cup ($1.85), but we chose to have it in the traditional Ethiopian pot ($3.75) with the dainty, little cups with no handles that hold about three tablespoons of coffee each.  There is an elaborate ceremony that comes with serving the Ethiopian coffee, but, unfortunately, nobody in the place could do it for us. Our delightful and charming waitress told us that there is a picture of it somewhere on the walls. Still, it was fun — and satisfying — just drinking it.

I like Alem – its central location Downtown, authentic décor, quite tasty menu offerings and great service has won my heart. I’ll be back! 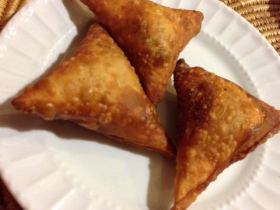 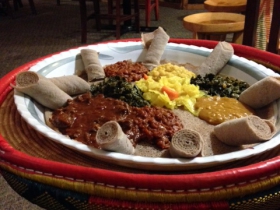 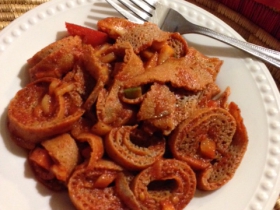 Called “maschi” (pronounced “mawshy”) in Sudan (one of Ethiopia’s neighbors in eastern Africa), these are also made by stuffing cucumbers. The cucumbers are peeled and made into little boats by cutting lengthwise, scooping the seeds out, then filling and finishing as below. You may also use eggplants. Peel small eggplants, remove the tops, scoop out interiors and proceed in the same manner.

Heat the oil in a large pot over medium heat. Then brown the beef with ½ teaspoon salt, ¼ teaspoon pepper, the fresh garlic or substituted garlic powder and the dill. Drain fat and add ¼ cup cooked rice; blend well.

Cut a circular incision around the top of each tomato so you can remove the top and scoop out the interior of the fruit enough to fill with half of the meat and rice. Prepare cucumbers, as described above by making “boats” out of each peeled half and filling each with the seasoned meat-rice mixture.

Melt 1 tablespoon butter and 1 tablespoon vegetable oil in the pot. Sauté the filled cucumbers and the stuffed tomatoes carefully in the fat, rolling the tomatoes gently a little until they become dark red all around.

Prepare sauce by combining sauce ingredients in a small cup or bowl. Pour it evenly over the tomatoes and/or cucumbers, cover and simmer gently over low flame for 10 to 15 minutes, until sauce is cooked.

Remove carefully to round platters. The cucumber dish is garnished with fresh cucumber slices and the eggplant with tomato and cucumber slices overlapping all around the edge. Surround the stuffed tomatoes with raw tomatoes cut in thick slices. Top each slice with sliced green olives.