“Between the yard and house, it could be a full-time job.”

Stewart Dempsey has spent 26 years fixing up his historic, 1883 home. It's all been worth it -- most of the time.

By Jabril Faraj, Milwaukee Neighborhood News Service - Oct 25th, 2014 08:16 am
Get a daily rundown of the top stories on Urban Milwaukee 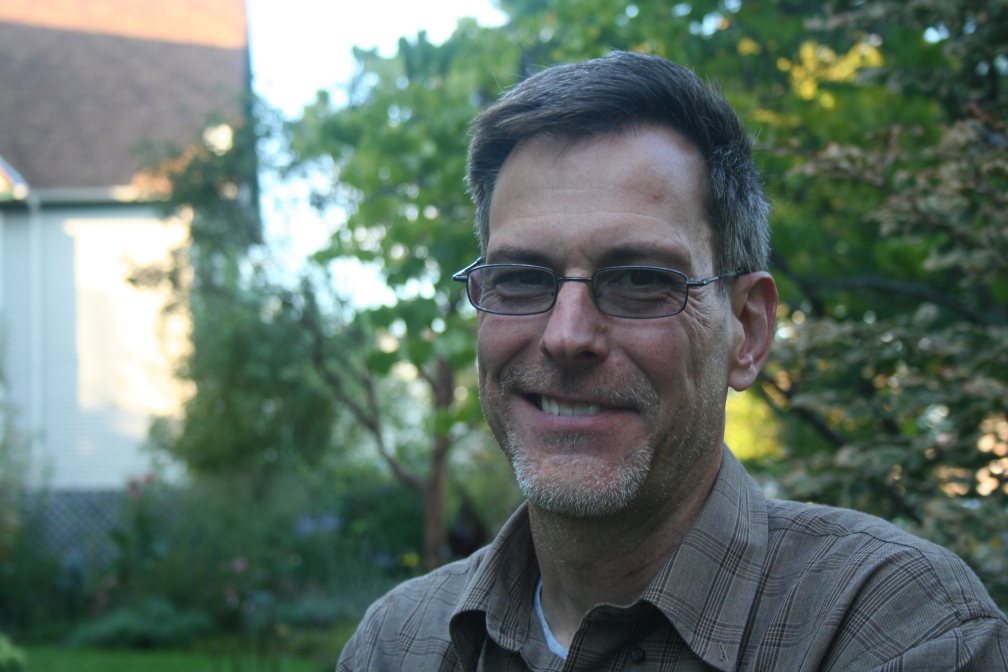 Stewart Dempsey in the front yard of his home, the Frederick Koenig House, in the Walnut Hill neighborhood.

Stewart Dempsey stands atop at painter’s ladder on a Tuesday afternoon touching up the trim of his historic home in Walnut Hill on Milwaukee’s West Side.

A 26-year resident of the home on North 32nd Street, Dempsey recounts its history:. “It was one of the first in the neighborhood; the very first one is two blocks away, Villa Uhrig, built in 1853. And the Koenigs, who built this house for German immigrants, they bought land from the Uhrig’s widow and in 1883 they built the house here. But it sat in the middle of what’s now 32nd Street, faced Lisbon. And, when the city came through this far…cause this was actually the Township of Wauwatosa, this was the country – the Koenigs owned four acres they had bought from the Uhrigs – and, when 32nd Street was cut through, they basically told Mr. (Frederick) Koenig, ‘Take your house down or move it or we’re gonna do it for you.’ And he decided to pick the house up, turned it to face the new street and then he actually developed all the houses on this block.”

Dempsey says the original home was designed by Milwaukee architect Henry Messmer who left his mark on the city, also designing St. Hedwig’s, Saints Peter and Paul Roman Catholic Church, and St. Mary’s Church in Port Washington. In 1897, the houses were remodeled by another Milwaukee architect, F.W. Andree.

“It’s an interesting house,” says Dempsey, giving a little more context. “So, the Koenigs had two grown daughters when they moved and remodeled the house and, at that time, they decided to double the size of it, why we’re not exactly sure, although I did find out from the family that the husband of one of the daughters left her high and dry – just left and no one knew where he went – so at least one of the daughters lived here with them.”

“By 1900, the daughter who lived here, her rheumatoid arthritis got so bad she couldn’t go up and down the stairs any more;  there was only one bathroom, upstairs, so the Koenigs built her a palatial duplex on the lot [just north of the house], which is no longer there, and she lived on the first floor and they rented the second floor. And it looked pretty much like this house, inside and out.”

“It’s been an experience living here” 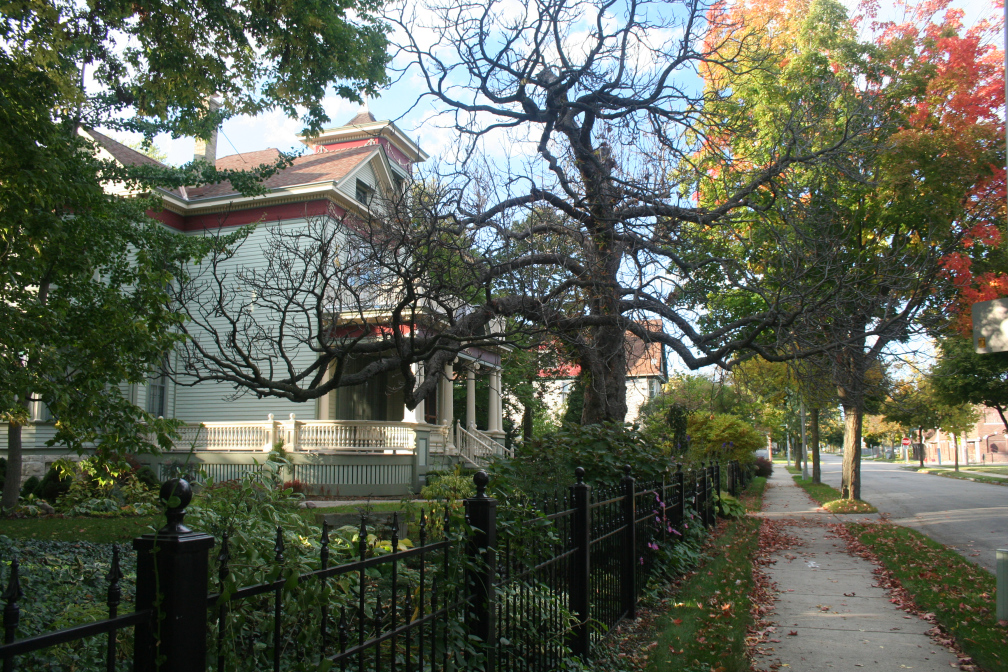 At the age of 23, Dempsey and his partner came into the neighborhood not really knowing what to expect. It was 1988. “It was the height of the crack epidemic in Milwaukee and almost every lot that is now vacant had a house on it or, like on Lisbon, there were apartment buildings on both sides and pretty much everything was occupied. It was a nightmarish kind of neighborhood; it’s gotten a lot better.”

Dempsey made sure the house, which would have been an obvious target for theft or break-ins, was “well-fortified.” Still, he says, they were, by no means, isolated from the reality of the locale.

“You know, there would be people on the porches until 4 a.m. with their stereo speakers blaring and, when they were done with their booze bottles, they’d just throw them in the air and they’d smash in the street. You know, that kind of thing. And you’d see drug deals, drive-by shootings; someone was shot at, not hit, like right across the street while I was out in the yard. It was intense.”

But Dempsey says settling here back then gave him some perspective he might not have otherwise had. “There were a lot of people that, I think, really cared just about themselves and their survival and I think that sets a tone for people… I mean, I’m from Madison and there aren’t––there weren’t any neighborhoods like this in Madison and so it’s, sort of, culture shock.”

“And then, in a strange way, you know, as the neighborhood improved…it’s not that bad of a neighborhood to live in, now. People still think we’re crazy, but it’s actually quite nice.” 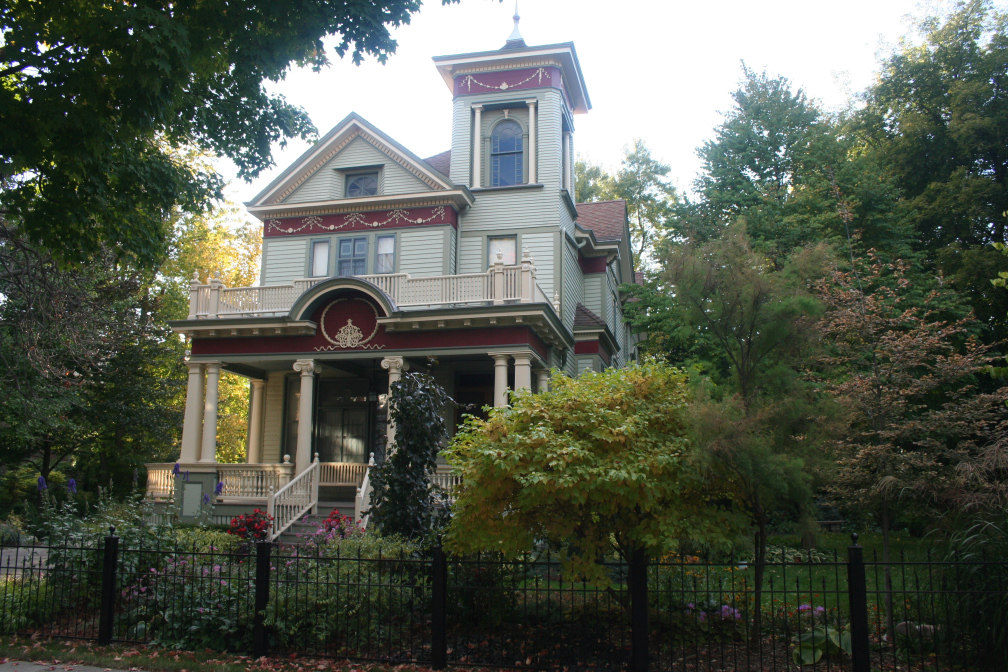 The Frederick Koenig House, designed by Henry Messmer and built in 1883.

When they first moved in, the house, much like the neighborhood, was in disrepair. “It had been a rooming house since 1938 and they had divided a bunch of the rooms up so there were, you know, extra bathrooms and sinks in every room,” says Dempsey. “Very, very bad condition, just about ready for the bulldozer.”

But, over the course of more than 25 years, Dempsey, who’s a Horticulturist by trade, has found a way to make the house a home. And, though the constant upkeep sometimes gets to him, he still remembers the first time he painted the entire thing. “The first time was amazing because it was so bad and then…I actually took all the paint off the house completely down to bare wood the first time and, then, putting the color on was kind of amazing, shocking to see it.”

“It’s a labor of love, there’s no question about it,” he says. “I mean, literally every weekend we’re out from after reading the paper until it starts getting dark working on the yard and the house. It’s just crazy.”

At the same time, though Dempsey would like some more time to relax, the maintenance isn’t something he’s willing to let go of just yet. “I’m very particular about [the house and yard] and I just see how other people do things and I don’t think I want them working on the house, you know?”

“Sometimes we do really think there’s something mentally wrong with us. But I have always been about the visual payback – that’s what motivates me. It’s like taking something that looks terrible and working with it, turning it around, making it into something beautiful,” he says. “And that’s sort of what keeps me going.”

7 thoughts on “Milwaukee Stories: “Between the yard and house, it could be a full-time job.””