Giant Eagle sculptures outside of the central branch evince an intriguing history. 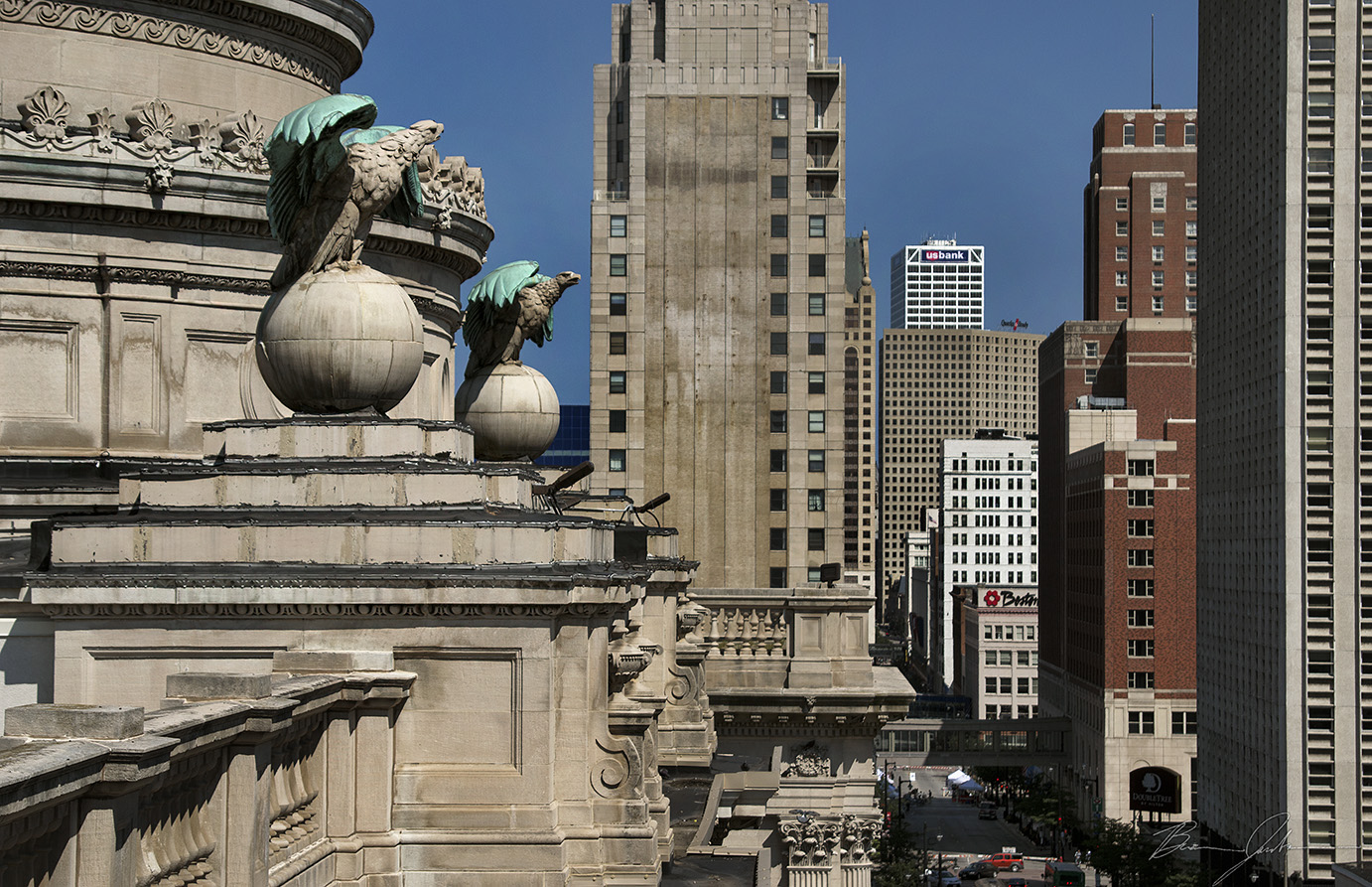 Occasionally, we stop looking down for traffic as we cross the street or examining the texts on our smartphones. When we gaze up, especially in downtown Milwaukee, we observe the detailed carvings and masonry work that went into older buildings. This may be a more common experience if we are sitting along the Riverwalk or waiting for a bus at Plankinton and Wisconsin Avenues, but it may not happen so much along the upward sloping end of W. Wisconsin Avenue where the Milwaukee Public Library (Central Branch) stands. When we look up at the balustrade and grand dome that centers the southern-facing main entrance, we can see two giant eagles spreading 11-feet of patina wings above us.

It occurred to me that in all the photos of this library, I’d never seen one from their perspective.  All photos from the exterior encompassed the whole of a magnificent structure or zoomed in to the roof-level from someone standing in the Court of Honor. Only a few classic postcards periodically cast a wide look west from the Eighth Street corner rooftop towards Marquette. 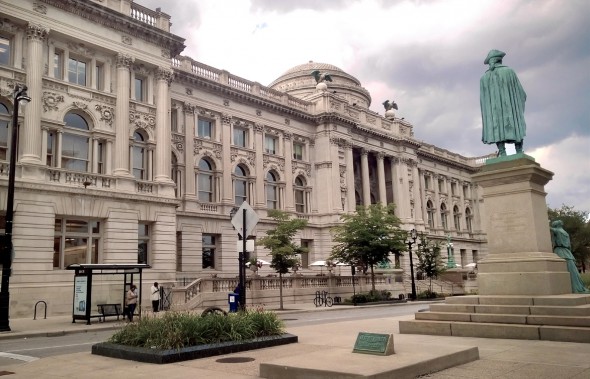 The Central Library in recent years installed a “green” roof and solar panel farm on the north half of the building and I had been up there several times for events such as a solar eclipse party and Doors Open Milwaukee. But aside from engineers checking on the huge bank of air conditioners, who traipsed on the southern roof? Working with MPL Director Paula Kiely’s office and Communications Director Brooke VandeBerg, I pleaded my way up there.

In my head, I imagined a “Gotham” New York-style photo as the creatures stood in profile. We would look all the way down Wisconsin Avenue to the lakefront with traffic flowing below. Alas, the city founders long ago warred over the angles of their streets, and so no clear line of sight is to be had.  One would have to climb the Carnival Column for a slim chance at that view.

No one is precisely sure* who designed and carved the eagles. Molded and sculpted from a special earthenware clay with bronze-cast wings, the work was contracted to the Northwestern Terra Cotta Company out of Chicago — the eagles being the only building carvings completed by 1898 that were not conducted wholly on-site by specialized masons with very detailed orders.

One could spend years researching the construction and development of the building that first housed the Milwaukee Public Museum (west half) and Library (east half) in a U-shaped building. Before it was the pride of architects Ferry & Clas’s resume, it was an forested, empty lot owned by Harvey Birchard, John Johnston, and newly minted Senator John L. Mitchell (of the great Mitchell family, who owned the “Deutscher” [later “Wisconsin”] Club next door) where summer concerts took place. It was known as known as “Mozart’s Grove.”  The library still has a reading room named for it.

Early critics noted that it is a near duplicate of the University Library in Leipzig, Germany. Others saw the Italian neo-Renaissance influence, and still others saw the Louvre in Paris. The use of sculpture certainly fits the post-World’s Fair love affair with Ecole des Beaux-Arts designs, and Milwaukee was very much into Eagles through imagery and clubs in the city.

First, the north end was filled in with a building so it became a hollow rectangle. Then more and more alterations happened until the building filled the space. In the early 1960s, the museum got its own building across Wells Street. And yes, there once was a adopted lion cub living up on the roof I was now carefully treading upon. There are loads of scheming architects and civic doings that Fine Art/Rare Books Librarian Patricia DeFrain shared with me, but we will stick to eagles and rooftops here.

Many elements remain perfectly preserved and show evidence of repair and renewal — mostly in the main entryway where one looks down at the intricate mosaic of tiles hand rendered by newly-arrived Italian immigrants and then up inside of the dome, which is flanked by many smaller plaster-glazed bronze eagles. On the outside, the pair of eagles are 15 feet tall from bottom of globe to wingtips.  They were once a dark color, which has either faded white 116 years later or changed after a cleaning. But their fierce looks and feeling of power is still ever-present.

* NOTE: I can tell you who did many of the major carvings on the Milwaukee Public Library. That was a man named Frank Steven, a stone sculptor with as great a footprint on the city as ironwork artist Cyril Colnik, but with little of the recognition — just as the man wanted it, if this 1931 retirement profile is to be believed. While his confirmed work on Northwestern Mutual, Marshall & Isley, First Unitarian Church, the sunken Mitchell Park gardens (lionheads saved from there are now inside the domes) and countless architects’ residences and magnates’ homes are noted. Yet the native Englishman is not documented as the one responsible for the library’s eagles. However, a newly scanned publication from the Milwaukee Chamber of Commerce eighteen years later called “Doings in Grain at Milwaukee” features a close-up of one of the dark eagles — and attributes Steven as the sculptor. 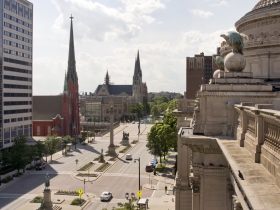 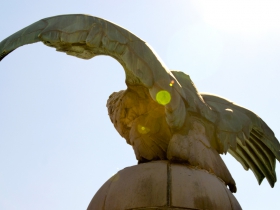 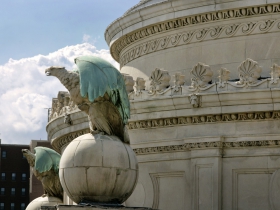 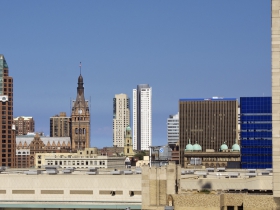 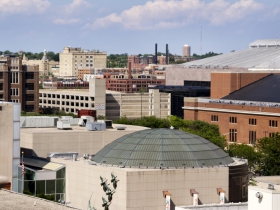 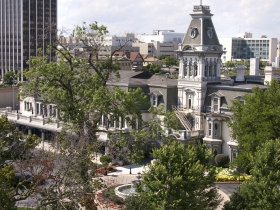