Back in March, I wrote that the Greater Milwaukee Committee had been awarded an Art Place America grant for “Urban Placemaking” with support of the Kresge Foundation.Following the grant, an evening urban market was held on W. Wisconsin Ave., and the Artery, a “Creational Trail” along old railroad tracks bridging in Harambee, is being developed.

The Kresge folks liked what they saw, and invited the GMC to apply for further funding to continue to develop the Artery, GMC president Julia Taylor said. The GMC will also form a Placemaking Committee to guide its efforts.

The city will add a 2.1 mile extension of the trail in 2015, and big plans are in store for Walker’s Point, Taylor said during a panel at the group’s monthly membership luncheon at the University Club Monday. Her remarks are further evidence that the relatively new concept of urban placemaking is here to stay, and is bringing change to “disinvested neighborhoods” nationwide.

In fact, the “Milwaukee Method” is being adopted in other cities as a model for placemaking, Taylor said.

The Washington D.C. Experience with Placemaking 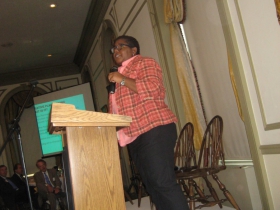 Kimberley C. Driggins, Associate Director of Planning for the District of Columbia described placemaking as “the intersection of art, community development and economic development.”

Driggins was one of two out-of-town speakers invited to give their perspectives on placemaking in their communities.

“‘Art’ is a verb,” she said. “We are doing Art to change a place.” She singled out the Anacostia neighborhood of Washington D.C. where “Lumin8Anacostia” brought thousands of people nightly to the relatively remote and economically distressed southeast corner of the nation’s capital with performances and pop-up markets.

The event brought area restaurants their best night of revenue all year, in a neighborhood plagued by empty storefronts. “Vacant space is dead space,” Driggins said, but it can be activated with artistic and cultural use. There is a lag time between placemaking projects and neighborhood revitalization, she cautioned, “but it generates interest.”

The increased vibrancy and foot traffic on the street kept the area active, and “helped change the narrative about a neighborhood,” she said. Anacostia was called the neighborhood with “the most improved reputation,” by D.C. Urban Turf as a result.

The Cleveland Experience with Placemaking 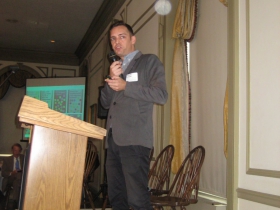 Properly cut plastic bottles can be sold as $5 flowers, he told the audience of CEOs. He revived the springtime tradition of Kuren Tovajne, a Slovenian festival, in a neighborhood with the highest concentration of Slovenes in America. A flea market now brings 150 vendors and 15,000 people to an underused area.

Fleming said he learned that “if you add beer to any event, you get wonderful turnout.” (This might be a revelation in Cleveland, but it is old news in Brewtown.) His group solved the problem of overgrown industrial lots by bringing in sheep for urban grazing, which he called “Lambscaping.”

“There is no end of puns you can come up with when you are dealing with sheep,” he said. The project got him labeled as “an idiot” by an AM talk radio host, which Fleming called, “an honor.”

For the maker set, the development corporation set up an upcycle parts shop. Fleming said if you have three wine corks, there is not much to do with them. “But give me 3,000 wine corks and anybody in this room can make something of it.” Fleming keeps this line in his upcycling speech for good reason – somebody once brought him 3,000 corks.

The most novel, and perhaps most enduring of Fleming’s group’s projects was the gutting of a derelict duplex in the area for the first “Loft Homes.” The boarded up home resembled, in many respects, ones commonly found in some Milwaukee neighborhoods. There might even be a couple right along the Artery.

Fleming’s group got their hands on a home that was scheduled to be demolished, but rather than restore it to its earlier use, the house was gutted and turned into a modern loft for only $11,000. This was terribly clever — the fewer rooms, the fewer required electrical outlets, heating registers, etc. 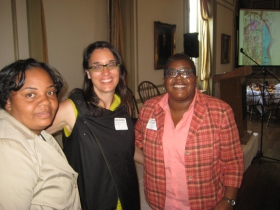 Sara Daleiden, who has coordinated the GMC placemaking efforts, led panel discussions on the work being done locally. Darryl Johnson of the Riverworks Center, which adjoins the Artery, said his neighborhood of industrial buildings is privately owned, which makes it different from many similar projects in the country, or even in Milwaukee.

There is growing interest in the maker economy to start businesses in Riverworks, Carl Nilssen, president of BIGMPG Marketing said. He added that “old factories are great for young creatives,” and says there are 5 or 6 maker spaces in Riverwest.

He is the landlord of Flux Design, “and everybody in this room has eaten in a restaurant they have designed,” he said, likening Riverworks to the Third Ward as far as its potential for job growth.

Steve Chernof, of Godfrey & Kahn agreed, and complimented the diverse crowd drawn to the market. Seeing Bob Monnat on his bicycle only added to the wonder of the occasion. “There are lots of pieces in the puzzle, and we have to work on them all simultaneously. The city has been fabulous supporting the efforts,” he said.

Up Next: Walker’s Point Innovation District 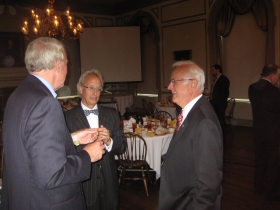 In the final presentation, developer Barry Mandel gave his insight on the planned Walker’s Point Innovation District, which will rely heavily on placemaking. Mandel Group was among the first Milwaukee developers to target the Millennial market, and to extensively use the internet for advertising and promotions.

Mandel called up a map on the projection screen, and said, “this is what gets me up in the morning.” The map was of Walker’s Point and its environs. “Downtown is moving south. Bay View is moving north.”

Mandel invited the audience to look at dozens of yellow marks on the map, many of them on S. 2nd St., representing restaurants and bars.

“Milwaukee has the most new restaurants and bars per capita in the United States.

Do you know where the big Silicon Valley deals are done? Restaurants and bars. Walker’s Point has an urban fabric that is begging to be discovered,” he said.

Infrastructure plans for the neighborhood will include making W. Florida St. a major arterial. Plans are to “get the Menomonee Valley Partners gang back together” for the development of Walker’s Point and the Inner Harbor, he said, with urban placemaking as a vital component. 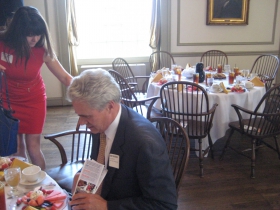 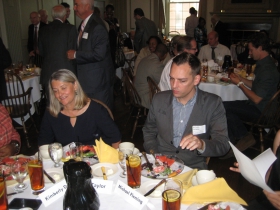 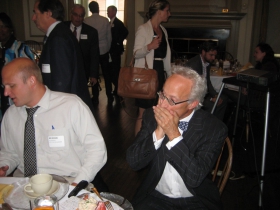 Two bronzes by American artist Harriet Whitney Frishmuth (1880-1980), acquired by the University Club for $4,000 in 1944, and long on display in the club lobby, were auctioned at Sotheby’s on May 21st, netting the club $1.1 million after fees and commissions.

“Joy of the Waters” fetched $605,000, also above its estimate of $350,000 – $550,000. The club will use half the money to pay off a bank loan (I thought that’s why they built the University Club Tower!) and the balance for operating expenses and remodeling on the first floor, now underway.