MSOE spent $250,000 to upgrade the 1894 Queen Anne residence of its longtime president.

The imposing home where Dr. Hermann Viets lives is a three story Cream City Brick Queen Anne residence built in 1894 as the parsonage for Grace Evangelical Lutheran Church, which is located across the street. (It’s the church with the huge stained glass portrait of Martin Luther where Jesus would be if it were any other Christian denomination).

In 1996 it was purchased from the church by the Milwaukee School of Engineering where it was used as office space for about a decade (including as the construction office for the Kern Center). In 2007, the school spent $250,000 to convert the building back to a single-family residence, which is now the home of the school’s president since 1991, the 70-year old Dr. Viets. (Viets moved there from his Lake Drive home in Shorewood.) The official name of the building is Humphrey House, in honor of the Glenn and Gertrude Humphrey Foundation, which came up with the funds for the structure. Humphrey, who died in 1983 at 78, had a stake in 30 car dealerships nationwide, and left a $10 million estate. One of those dealerships was located where MSOE’s Grohmann Museum now resides, just a block south of the Humphrey House Broadway. 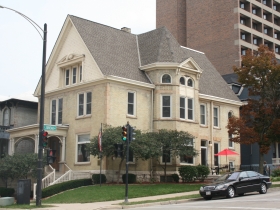 The building, like the rest of MSOE property, is tax-exempt, although city records value it at $22,000 for the land, $123,000 for the improvements for a total of $135,000. This sum has not changed since 2006, since the city rarely revalues exempt property. Nothin’ from nothin’ is nothin’, after all.

As the President’s residence, it is unparalleled in its proximity to campus and to downtown. Where else can you find the president of a college grilling his burgers right in full view of the public? No problem here, since the president’s patio is right on E. Juneau Ave., unobscured by fence or hedge. Viets and his wife Pam have become a fixture during the annual Storm the Bastille run, waving from their patio as the runners come down Juneau Ave and head south onto Broadway.

Furthermore, the residence is located mere feet from the president’s office, also on N. Broadway, located in a series of rooms bursting at the seams with an unending plunder paintings sent to the college by longtime benefactor Eckhart G. Grohmann.

Fancy Neighbors with Wright Connections: The home immediately to the east of the Humphrey House is a three-family income property owned by U. S. District Court for the Eastern District of Wisconsin Judge Lynn S. Adelman, who grew up in a Fox Point home designed by Frank Lloyd Wright that now belongs to his brother, Craig Adelman after the death last January of their father, Albert “Ollie” Adelman.

How Milwaukee Is It? If Dr. Viets had to pay taxes on his residence, he would find the offices of the City of Milwaukee Treasurer a convenient four-tenths of a mile away. 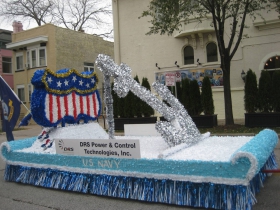 Viets, who was born in Germany during World War II, has presided over a significant amount of change at MSOE. While the university has remained true to its focus on educating engineers, it has added the Rader School of Business and the School of Nursing. Perhaps most noticeable during his tenure is the number of capital projects undertaken, including not only the purchase of the Humphrey House, but the development of the Kern Center, Grohmann Museum, Rosenberg Hall, Krueger Hall and the under-construction Athletic Field and Parking Complex. In addition the school has expanded to fill the Campus Center building at 1025 N. Broadway that was formerly home to Blatz, and later Pabst.

Viets received the World Citizen Award in 2008 from the International Institute of Wisconsin.

Before arriving at MSOE, Dr. Viets worked at a number of well-regarded institutions across the country. According to his official biography…

Viets received a bachelor’s degree in aerospace engineering, and both a master’s degree and Ph.D. in astronautics, all from Polytechnic University in New York City and Farmingdale, Long Island. He was a visiting scientist, aerospace engineer and research group leader for Wright Patterson Air Force Base Aerospace Research Laboratories in Dayton, Ohio; lecturer at the Von Karman Institute in Brussels, Belgium; and a research associate at the Polytechnic Institute of Brooklyn, N.Y. His other academic experience includes (whew) serving as dean of engineering at the University of Rhode Island in Kingston; associate dean for research and professor at West Virginia University, Morgantown; and professor of engineering at Wright State University, Dayton, Ohio.