How a couple fell in love and started their own eco-friendly printing store. 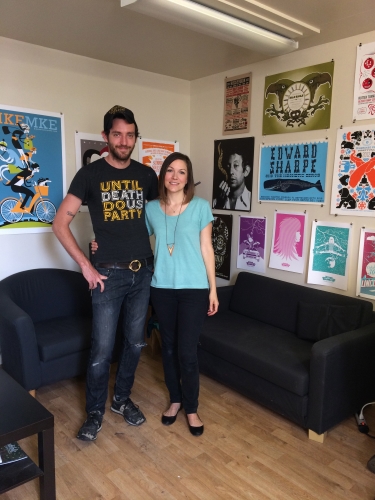 Whitney Teska grew up playing in bands, and they were always looking for a cheap way to make merchandise, says his wife, Julie Teska. Most of it ended up being DIY stuff. Whitney developed a passion for the process, and decided to open up his own printing store one day. When he later met Julie, “I fell in love with him and with his idea,” she says. The two decided to go into business together. Though Julie didn’t have experience with printing, she quickly jumped in and began learning.

Through a stroke of good luck, Whitney’s mom noticed that UW-Milwaukee (where both Whitney and Julie were alumni) was hosting a business plan competition. Graduates of three years or less were invited to enter the competition with an idea for a potential business. Whitney and Julie, having graduated exactly three years prior to this, just made the cutoff. They were able to use UWM’s resources and talk to professors about how to start and then operate a business. Since both had degrees in unrelated subjects, this was enormously helpful to them. At the end of the competition, their idea for the printing company won, and the Teskas were awarded a cash prize in order to help them start up their business and buy equipment.

Julie still remembers their first customer on July 4, 2008, a friend’s local band called Red Knife Lottery. “I can picture their t-shirt design in my head!” she exclaims.

Orchard Street Press continues to make merchandise for many local bands. They also make merchandise for local businesses and restaurants, like BelAir Cantina and AJ Bombers. T-shirts are their most popular product, according to Julie, followed by stickers and posters. “A lot of people come to us with print-ready artwork,” she notes. This allows Orchard Street Press to work on as many as 30 jobs at a time, all varying in depth and length. “We doubled our staff within the last month,” Julie says.

When asked what are the best and worst aspects of owning a business, Julie finally settles on the same answer for both: the responsibility. On one hand, Julie says, “You have to wear so many hats. There is no one above you to delegate tasks.” This makes time management difficult for the business owners, because if they don’t get it done during the 8-5 workday, it spills over into their personal lives.

On the other hand, she says, “I love having that kind of responsibility, the challenge. Every day is different.” Echoing a common comment by other owners of small businesses, Julie mentions her happiness at how local businesses are supported in Milwaukee. “This one band has enough business that they give us some, as well as other local printers. I think that’s great.”

Whitney and Julie are also committed to green methods of printing. “Screenprinting in the early days only made thick, heavy printed shirts, but we use only eco-friendly inks to produce soft shirts that are not harmful to the skin,” Julie explains. Soaps used to clean their machines are also solvent free. This is important to the duo – not only is it better for the environment, but it also makes better quality products for their customers.

In 2011, the duo launched their own product line. The idea originated when a friend was going to be featured by Art vs. Craft, and Whitney and Julie decided that they, too, wanted to do their own designs. Art vs. Craft was a large and eccentric Milwaukee craft fair, which featured only local vendors. It was an annual event held every Friday after Thanksgiving, and was a great place for local arts and crafters to sell their products to a highly receptive crowd. Last year, November 2013, was the final show, according to creator Faythe Levine.

Most of Orchard Street’s products are Wisconsin- and Milwaukee-centric. The product line has been branded Orchard Street Apparel so as to be distinct from Orchard Street Press.The Teskas try to come out with a few new designs every year, but whenever they try to move away from Wisconsin themes, they always go back because “it eclipses everything else. That’s what people want!” Julie says. She went on to describe a cool moment for her at a Pabst Blue Ribbon fest that she attended, where she saw no less than 6 people wearing their Milwaukee skull shirt. Success!

Orchard Street Press is located at 815 S. 9th St. in the Walker’s Point neighborhood and is open 9 am-5 pm Monday through Friday.

Gov. Evers Delivers on Promise to do What’s Best for Kids, Invests $110 Million in Wisconsin Kids and Schools by Gov. Tony Evers