Why East Side development can move so slowly. And when developers can bypass the neighbors.

Chicago-based developer Yiannis Konstantinou is building a new, 36-unit apartment building just north of Brady St. at 1809 N. Cambridge Ave. This comes after Konstantinou was rebuked by the neighborhood last year in an attempt to build a 40-unit building just north of the current construction site. But his new development didn’t have to go through a lengthy approval process thanks to pre-existing zoning for the site, a rarity on Milwaukee’s East Side.

Konstantinou acquired the lot from CIBM Bank in early 2013 for $150,000. He bought it less than a year after a fire severely damaged the vacant home on the lot. The August 2012 blaze resulted in injury for a Milwaukee fire fighter, when he fell from the pitched roof.  (I was at the site shortly before this happened, having been drawn by the flashing lights from the nearby Snap Fitness).

What made it a really good deal, and raises an interesting question about development, is that the site allows the developer to build their desired development “as-of-right.” What this means is that when a proposed development conforms with zoning, the developer can skip meetings with the neighbors, Department of City Development, local alderman, City Plan Commission, Zoning, Neighborhoods & Development Committee, and Common Council in favor of a simple trip to the city’s Development Center to pull the necessary permits. This leads to fewer sleepless nights, lower soft costs on the project and potentially lower rents.

But it’s an exception to how most development works. Thus, despite the East Side being a very desirable area to build, with considerable density, much of the land requires zoning variances for new apartment buildings. This below market zoning allows neighbors to have input, as well as allowing the Department of City Development and local alderman to influence the design of the building. 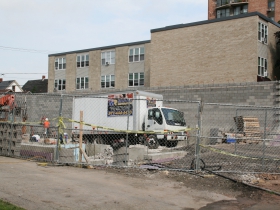 As my colleague Michael Horne reported in an article in January of last year, Konstantinou proposed a 40-unit apartment building at 1400 E. Bolyston St. On that site, Konstantinou needed a zoning change and it was made clear the neighbors opposed it (the East Bank Neighborhood Association voted to oppose the project, but did vote to support one nearby that never happened). Almost every other development in the area has to go through the same lengthy process of neighborhood and committee meetings.

That increased cost and uncertainty certainly reduces the amount of development in the area (and therefore the growth of the city’s tax base). Instead of building what the market will bear and the zoning code logically allows, it requires developers to negotiate deals with neighbors, politicians and city officials on a case-by-case basis. While some developments arguably are improved by this, it’s overall a net loss for the city. Things take longer, they cost more, and the actual zoning code is overrode by a thousand different variances.

As Mayor Tom Barrett has remarked multiple times when it comes to the initially controversial new East Library, he “didn’t realize everyone on the East Side was an architect.” Finding a way to avoid or placate those “architects” can be a big issue many area developers. Which is probably why Konstantinou wanted to find a site big enough with zoning to allow his development “as-of-right”.

Milwaukee could be an economically and environmentally healthier city by having zoning in place that allows for development that fits within market-driven density demands and neighborhood-desired design guidelines. Milwaukee could have both more development and better designed development. The East Side Architectural Review Board accomplishes this on North Ave., but that’s a small slice of the East Side. Until better zoning that matches market demands is in place, Milwaukee will continue to be hampered by a process where no one comes out a winner.

Opposition to development proposals isn’t unique to the East Side, though. In Bay View, Alderman Tony Zielinski submitted a petition for a historic designation on an empty lot to the city’s Historic Preservation Commission in an attempt to gain influence on a potential apartment building that could be built within the zoning rules. He later withdrew the request, but not without revealing yet another way games can be played with development. While Zielinski may claim he made the move at the behest of neighbors, it would be better to have a well-designed and designated zoning code tackle the issues.

This isn’t the first time historic preservation was brought up as an issue in Bay View either. It was used in part on General Capital’s Hide House Lofts project. Similarly, a battle was waged over the zoning of the former Dover Street School that resulted in the developer making changes.

What About Bolyston St.?

Getting back to the Lower East Side, Konstantinou still owns the four lots that make up the site at 1400 E. Boylston St., having acquired them for $245,000 in September 2012. A source has indicated to me that while the original plan is dead, Konstantinou still intends to move forward with a development on that site. I’m told he will probably opt to develop a small number of condominiums over apartments, a proposal that would likely conform to existing zoning. 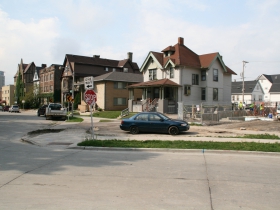 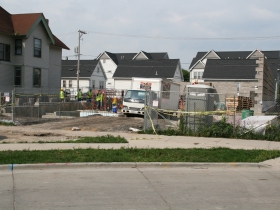 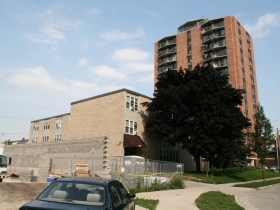