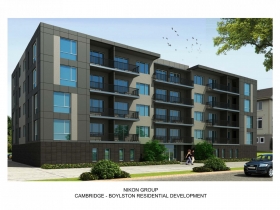 Alderman Nik Kovac has been getting an earful from constituents about a proposed 40-unit, 41-parking space apartment building planned for a site at 1400 – 1430 E. Boylston St.  [map] that currently allows only 22 units with 15 parking spaces. The developers will need to go before the Milwaukee City Plan Commission for a zoning change.

“There is a palpable level of discomfort with this plan,” wrote neighbor Jessica St. John. “While parking is of primary concern, there are also many, many questions about why the existing zoning in the neighborhood allows for even the current [22 units].”

The low price surprised Julilly Kohler, the developer who once owned the property and sold it along with some lots to the east in 2005. Those properties, along N. Cambridge Ave., have since been developed at a below-zoned density. Kohler said she is reviewing deed restrictions that she attached to the Boylston property when sold. She suggests the developer’s plans to offer 40 parking spots for residents and neighbors might be an attempt to gain leverage for approval in the parking-strapped neighborhood.

Neighbor Shirley Ferguson, who lives in a N. Warren Avenue home in which her husband Carl was born, also wrote Kovac about a late November neighborhood meeting at which the proposal was unveiled.

“I understand a meeting was held at Holy Rosary [Catholic Church] recently regarding a proposed 44 [sic] unit building on Boylston St.  Carl and I were not notified about this meeting. As longtime members of the East Village we feel… such a development is grossly oversized for this mainly residential area.  I have checked with other neighbors to see how they feel about such a large development…..they were unaware of this proposal……..matter of fact the neighbors across the street on Boylston were not notified…….that seems like a large error.  Such a development would be inappropriate for our neighborhood and we strongly request that you vote against this.”

The meeting referred to was held by the East Bank Neighborhood Association. 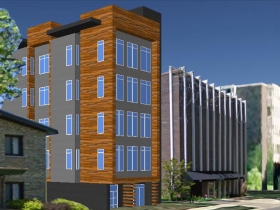 Its president, Andrea Rowe Richards, a former Department of City Development spokesperson and wife of legislator Rep. Jon Richards, said her group has since voted on the proposal.

“The East Bank Neighborhood Association Board, based on the input of our general membership, has voted to oppose the project as presented to us by the developer at our November meeting.” (However, the group does support a plan to develop housing for the mentally ill at 1851 N. Cambridge Ave.)

A petition to stop the development has been circulated by Mary Smith, a neighbor who says, “This development is out of sync with our neighborhood in size, density, aesthetic, and intention. For over 100 years we have proudly been one of Milwaukee’s only downtown adjacent neighborhoods that features single-family, duplex, and low-density apartment buildings. This has allowed us to enjoy a wonderful quality of life and property values that have withstood more than one economic downturn.”

Ald. Kovac, who is out of town for the rest of this week, told Urban Milwaukee in December that he is paying attention to the neighborhood objections to the project. There are as yet no public hearings scheduled on the project. 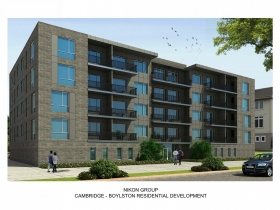 Even longtime residents of the Lower East side may be unfamiliar with E. Boylston St., which runs for only a block and has no intersections. It occupies an east-west gap between north-south N. Warren Avenue and N. Cambridge Street. The street lies just east of Caesar’s Park, which provides direct access to trails on both sides of the Milwaukee River. A streetcar line connecting Brady Street with the upper east side once ran along Warren and Boylston, bringing many people to the neighborhood’s attractions, which included swimming schools and ice skating in the late 19th century.

The Blackthorn Bar, 750 N. Jefferson St., probably the city’s least authentic of its many inauthentic Irish taverns, closed without notice last week. … Fitzgibbons Pub, of 1127 N. Water Street, one of the city’s most authentic Irish taverns, will reopen as Pourman’s. Jacquelyn Barret has applied for a license at the closed O’Brady’s, 1634 N Water Street, located in one of Milwaukee’s oldest standing buildings (if it still is standing, that is. Gotta check daily.) … Thor Antonio Stolen plans to open Arepa, 635 E. Wright St. In response to the license application question as to whether he had been convicted of any municipal offenses, Stolen, 32, answered in the affirmative: “noise, underage drinking (throwing a party in college.)” … Kendall Breunig, whose brother owns 4 per cent of the 1870’s-era Pritzlaff Building, has applied for a license to operate a full service restaurant there at 143 E. St. Paul Avenue, at last bringing us a place to drink near the train station. … The Fifth Ward Pub and Grill hopes to open at 814 S. 2nd Street in a space once known by that name, which was succeeded briefly by the late Zim’s… Prasith Nanthasane, 54, a native of Laos, plans to open the Elephant Cafe in a building he owns at 1505 N Farwell Ave. just north of the Pasta Tree. … Rocketship Charter Schools, based in California, is taking bids for a facility here in Milwaukee…Sachen A Shah of Waukesha is in the process of securing licenses for Koppa’s Farwell Foods, 1940 N. Farwell Avenue, a longtime independent grocery famed for its quirky signs and its Fulbeli Deli. The store is currently owned by a corporation controlled by the founding, namesake family.

The Bicycle Federation of Wisconsin is holding its annual Winter Carnival February 1st 2013 at Ray’s Indoor Bike Park, 8365 N. 76th St. … Judge John DiMotto writes: “The Milwaukee Bar Association Judicial Forum Committee will be hosting two pre-primary forums at its offices at 424 E. Wells Street. On February 6th at noon, they will conduct the forum for the race in Milwaukee County Circuit Court, Branch 45. Professor Daniel Blinka of the Marquette University Law School will be the moderator. On February 7th at 12:15 pm, they will conduct the forum for the Supreme Court race. Steve Walters from WisconsinEye will be the moderator. On behalf of the MBA, I will welcome those in attendance and do the opening introductions. After the primary, the MBA hopes to conduct a second forum for the finalists in both races. If you want to hear directly from the candidates, you should plan on attending. Written questions can be submitted for the moderator to ask of the candidates.”

Thanks, your honor. Anything that brings dignity to a Wisconsin Supreme Court race is a welcome development.

18 thoughts on “Plenty of Horne: Neighbors Boiling Over Boylston Plan”