Urban Vancouver, a Model for Milwaukee?

Lacking the back-to-back skyscrapers of New York of Chicago, its smaller-scale urbanity is a marvel that Milwaukee could emulate.

Last week we took a look at Seattle and its thriving urban environment. Next we head north to Vancouver, Canada.

My fiance and I arrived in the heart of the city via Amtrak’s Cascades Service. While I had hoped we would get to ride the new Milwaukee-made Talgo equipment the route is using, we ended up on the last generation of Talgo equipment (still significantly better than what Amtrak and Wisconsin use on the Hiawatha train to Chicago). If you have a choice on how to travel between Seattle and Vancouver, take the train.

Vancouver is an eye-opening city. Though it’s in Canada, Vancouver on the street-level feels largely like its American peers in the Pacific Northwest, with one exception. Its density is unreal. The Vancouver region is significantly smaller than Seattle and roughly the size of Portland, but Vancouver feels like a city at least twice its size. I’ve broken it down in the chart below. I included the regional numbers for population-weighted density (explained), which is now recognized by the US Census Bureau (and proves why Milwaukee is denser than most of its peers). The chart shows that even Vancouver’s suburbs are denser than much of Portland and Seattle.

Vancouver’s density manifests itself in a downtown core that is filled with well-situated high rises (they’re countless, but rarely seem to block the view of another), but also with an extensive list of neighborhoods that have high densities without the high rises. Following the spine of the SkyTrain (subway and elevated rapid transit system), a number of nodes can be seen in the suburbs that have high rises as well. Vancouver lacks the traditional central business district, historic urban core, suburbs and exurbs layout of most major American cities. Instead, it has a very dense downtown, but the rest of the region also has considerable density, with a number of nodes that are denser than many American downtowns.

The result is unlike anything I’ve experienced before in a city. You feel as if you’re in a massive city by the street activity (pedestrians, cyclists, store density), but unlike New York and Chicago, there aren’t skyscraper canyons that cast shadows and can exceed the human scale. Virtually every street around downtown seems welcoming to walk down.

Perhaps the most welcoming fact about Vancouver for a tourist (traveling without a car) is that the city isn’t built around the car, even the new developments. It’s a very pleasant for walking or bicycling with a well-planned network of on and off street paths. Cars are certainly present, but they’re not given priority over every other mode of transportation. High rises in the Midwest and many other areas are often defined by the parking pedestals they’re built on top of. Those parking garages still exist in Vancouver, but you can’t tell because of zoning regulations that result in the first few floors of many developments being town homes, retail or offices (the high rise we stayed in had a parking garage, but I could never find it from the outside).

Vancouver has a number of advantages over other cities. To name a few, it’s surrounded by abundant natural resources, the ocean makes for mild weather, foreign capital flows into the city and it’s the largest city in Western Canada. But for all those advantages, it also leverages and maximize those assets.

Instead of building homes all over the nearby mountains, they’ve been preserved as parks (which makes the entire region more attractive). Instead of carving up the city with highways and inducing urban sprawl, the city has a number of smooth flowing boulevards that add value to neighborhoods and preserve farmland. The well-situated skyscrapers add value to each building as well as making activity at the street better. A large network of off-street trails promote recreation across the city. The port area seems clean, leading to container ships within view of sailboats and kayaks. The rapid transit system (SkyTrain) has generated billions in transit-oriented development, as well as being fully automated (computer driven), which allows for a higher frequency of service at a lower cost (it’s also well connected to the extensive bus system). The former Olympic Village (2010 Winter Olympics) is now a mixed-use neighborhood. All this adds up to a city that has only a couple million people, but has the benefits of one with ten million.

My photos attempt to capture the energy of Vancouver. I’ve included a number of anecdotes and observations in the descriptions for the photos, so click around to learn more. 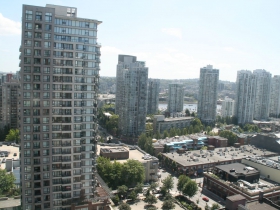 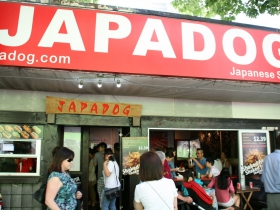 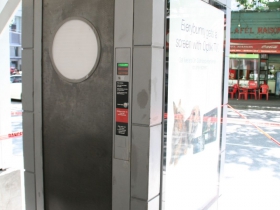 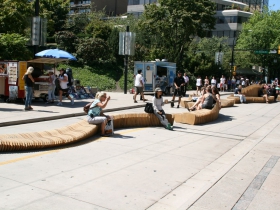 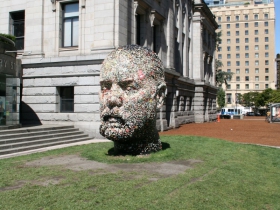 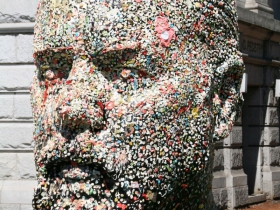 13 thoughts on “Photo Gallery: Urban Vancouver, a Model for Milwaukee?”