Philip Chinn came back to Milwaukee from Columbus, but plans to move on, to seek a more progressive political climate.

By Jabril Faraj, Milwaukee Neighborhood News Service - Aug 7th, 2014 10:47 am
Get a daily rundown of the top stories on Urban Milwaukee 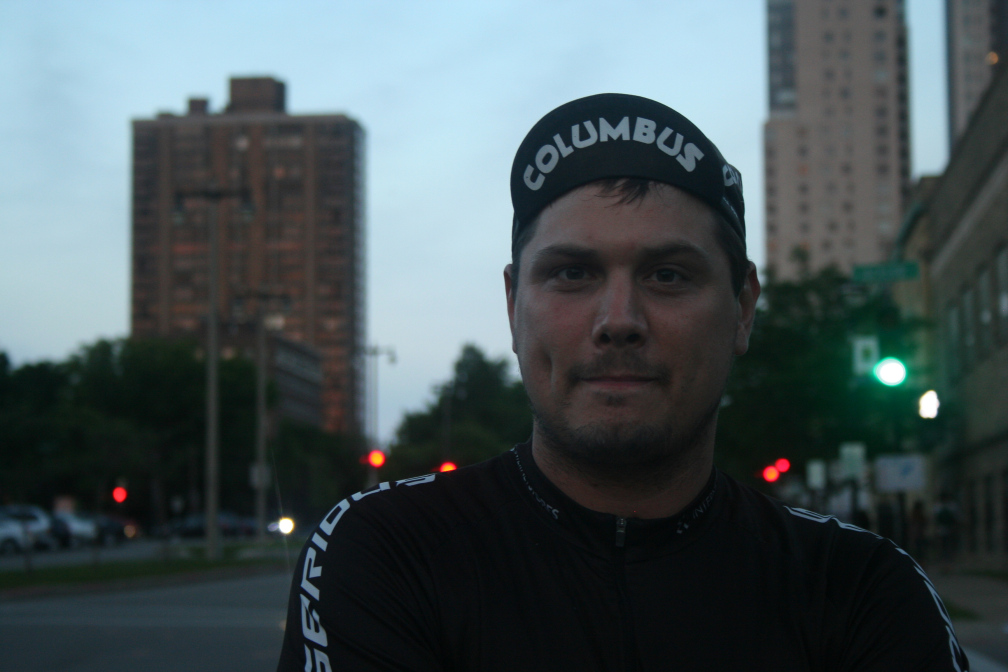 Philip Chinn stands with his pedicab near the corner of Jackson and Kilbourn during Jazz in the Park waiting for riders.

Chinn grew up on the north side of Milwaukee near 55th and Mill Road before his family moved to Columbus, Ohio, when he was 8-years-old. What does he remember from his time there? “Mostly, it was pretty chill. Our neighborhood was ‘bad’ but there wasn’t too many drugs, and there wasn’t a lot of shootings and stuff like that,” says Chinn. “It wasn’t the worst part of the north side, by any means.”

So, when Chinn’s dad was transferred for his job, the family packed it in for Ohio. Right around that same time, his parents got divorced. “My mom just couldn’t handle leaving her family – all her family is from here.”

But the divorce wasn’t all because of the move and, looking back, Chinn thinks it was probably for the best. “I also think, now that I know my dad and mom as adults, they would never be able to handle each other; they’re just completely different people.”

Chinn lived in Columbus until he was 18. Then, one day, Chinn’s cousin called and offered him space in his East Side apartment. “So, the next morning I packed one suitcase and I took the bus to the bus station and I showed up here. I didn’t tell my dad, my girlfriend, my job; I just said, ‘later,’ and I showed up at his door,” he recalls.

Chinn went to college for a year before dropping out. Then, soon after, his daughter was born. At the time, he was 21 – and her mother, a couple years younger – and their relationship just didn’t work out. “We just ended up being different people but, you know, so far, so good. I have a healthy, beautiful child that’s intelligent and fun; she has two parents that are with her and it’s worked out pretty good so far.”

Like in any complicated parenting arrangement, Chinn says they “fight here and there.” He says most of their disagreements simply come down to parenting styles.

Regardless, he’s proud of his daughter. “She hates cigarettes, she hates drinking, she’s just a really well-behaved kid,” Chinn says.

“I’m excited to graduate and go to grad school.”

So, Chinn put down roots in Milwaukee and decided to go back to school when he was 30. He’ll graduate from UW-Milwaukee in December with a Bachelor’s Degree in geography (specifically, Geographic Information Systems).

He says the map-making software is used for anything that spatially represents data. “Everybody uses it…any Google Maps engine is a GIS program, any kind of data that county governments use for land use or cities use for land use, that’s all GIS. It’s the only bankable skill in geography anymore unless you want to teach.”

What inspired him to go back? When Chinn saw all his friends graduating and wasn’t satisfied with what he was doing, he knew it was time for a change.

Though he had nothing but praise for his former company, the job just wasn’t what he wanted to do, long term. “I just saw my career path with this company…I just didn’t like what I was doing. I want to do something a little more personally fulfilling.”

Though he said it was “a real adjustment” leaving a well-paying, stable job, he’s confident he made the right choice. A year after he left his job it was gone anyway; he’s also excited about the knowledge he’ll be able to pass on to his daughter.

“It was tough at first, but I’m really glad that I went through it because now I’m going to have the opportunity to go to grad school and, past that, you know, we’ll see.”

“The line’s really drawn in the sand, in Milwaukee”

Still, Chinn wants to go to grad school for urban planning and he says it most likely won’t be here. “I’ll be here for at least another five years but then I’ll leave; I’ll go to some place with a little less dysfunctional government and some place a little more progressive, from an urban planning standpoint – some place that has a little more regional cooperation to, you know, do cool things instead of just fighting all the time and building highways like Wisconsin does.”

He blames much of the inaction on segregation, polarization and the current political climate. “People are not gonna want to come to Milwaukee when they have this, you know, animosity from suburbs to city,” says Chinn. “Companies aren’t going to come here just because you give them a tax break.”

In his mind, Milwaukee needs a major change-of-focus from manufacturing to service sector jobs. But the city has yet to find its niche and doesn’t quite have the brainpower for this, he adds. “We need to turn UWM into a premiere institution and not just be a shadow of Madison.”

What’s the solution? If anything will happen, Chinn says we’re going to have to work together. “There’s a lot of things that we could do but the political economy to get it done just isn’t there. There’s a lot of people here with great ideas doing great things but they’re not part of the ruling coalition. They’re always on the outskirts trying to get in and they’re getting little things done here and there but, you know, we need something major.”