Ask for the “other” menu. It’s the most authentic Chinese place in town.

Let’s talk jellyfish – specifically where one can find them in a Milwaukee-area restaurant. Answer: Fortune Chinese restaurant at 2945 South 108th Street in West Allis – one of two locations they have (the other, oddly, is on the same street, on 108th St. in Hales Corners). A Chinese professor of Asian art at UW – Milwaukee (a native of Beijing, China) once told me this is where one can find very authentic Chinese cuisine in Greater Milwaukee, and not just the ersatz stuff they make for Americans. Intrigued, I eventually had to find out for myself.

The outside and inside of the West Allis Fortune are not much to look at. But we were here for the food. We were greeted warmly and seated quickly with little green menus. On their web site, I saw that “Eight Treasure Duck” was served here. That’s something one rarely finds at a Chinese restaurant in North America. When I asked our waiter why I couldn’t find it on the menu, he replied that it was on the “other” menu. He then retrieved two for us. Leafing through this menu, I could only go “Wow!” There’s where we spotted a big platter of jellyfish for $10.95. Of course, we had to try it!

Sipping Oolong tea (which comes by the complimentary pot-full when ordering an entrée), both of us cautiously proceeded to pick at the pile of thick, long, glistening strands of cooked jellyfish in sauce before us on a bed of pickled vegetables. My friend found the slightly chewy texture objectionable, but she liked the flavor just fine. I thought it was hands-down a winner. I liked the texture, reminiscent of eastern-European dumplings. And I later discovered the pickled vegetables underneath the jellyfish by eating my way through the pile with a pair of chopsticks. I think the pickled vegetables were diced daikon, a very large Asian radish. It was as sweet as it was tart. The dish was my second favorite of those we had at Fortune, and I’m not a huge fan of seafood.

I chose to start the meal off with a cup of their hot and sour soup for under $2 – my favorite soup to have in a Chinese restaurant. I was disappointed when I had to jazz it up with a bit of the red vinegar, soy sauce and chili sauce on our table. It was my least favorite of what we ordered.

Probably my favorite was the Szechuan shrimp platter that my friend ordered for $13.55. The shrimp, accompanied by bits of green bell pepper, carrot and other vegetables, were deep-fried, lightly dressed in the succulent and thick Szechuan sweet-sour sauce, and perfectly cooked.

My entrée was the Eight-Treasure Duck for $16.95. The dish is pretty much extinct in North America, except in the biggest city Chinatowns. But here’s little Milwaukee’s Fortune Restaurant serving it to those in the know! Though there are endless permutations of recipes for this dish in China, the basic one consists of a whole, roast duck whose body cavity is stuffed with any number of seafoods, nuts and other variables. Mine came as slices of duck in a thick sauce dressed with perfectly-cooked scallops, shrimp, haddock fillets, mushrooms, little slices of Chinese roast pork, fancy-sculpted and quite tender calamari, and imitation crab (tsk,tsk!) framed by baby bok choy on the platter. Of course, it was served (as was the Szechuan shrimp) with a small bowl of white, sticky rice.

The duck slices tasted very much like Chinese roast pork. My friend, who is a huge fan of duck, thought that it was a bit gamy and should have been crisper. She didn’t like it, while I found it, all-in-all, tasty and satisfying. I’d guess my friend’s sense of the “gamy” flavor may be how they like it to taste in China. So the Eight-Treasure Duck was a toss-up for us.

When we were finished and got the bill, our waiter brought us a small plate with four delicious orange slices to complete our meal. That’s how they really do dessert all over Asia – by serving fruit. They threw in two American fortune cookies, too.

If you want the real deal on Chinese food in Milwaukee, Fortune is the place to get it! 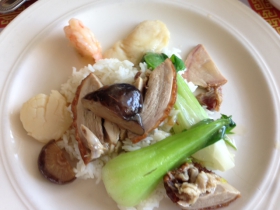 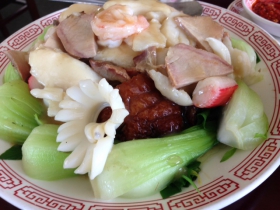 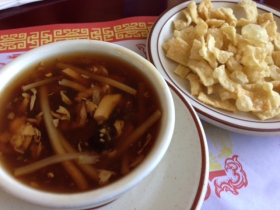 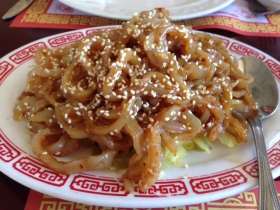 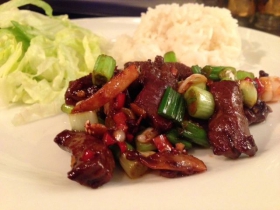 I bussed tables in a Chinese restaurant when I was still in high school. I had a huge crush on the owner’s daughter, but she was in love with the Mexican dishwasher! Anyway, here’s a recipe you might fall in love with.

Preparation:
If using pork tenderloin or chicken breast/tenders, cut into very thin matchsticks using kitchen sheers. If making with chicken, lightly poach the chicken matchsticks in gently simmering water with just a touch of sesame oil, about a minute or two, before starting the rest of the recipe (this helps the chicken to set in straight lengths so as not to curl up during the stir-fry process). I just use the same pan that I will stir-fry everything in, rinsing and wiping it out really well after poaching the chicken.

Heat a wok or heavy-based pan over medium-high heat and toss in the Szechuan peppercorns – roast them, tossing frequently, until they just start to smoke a little. Add in 1 tablespoon oil; when just smoking, add meat, season with a little salt and seer on all sides, stirring/tossing constantly. Stir in chopped chili, garlic and ginger; cook, stirring constantly, until softened just a bit. Stir in the hoisin & soy sauces; stir-fry for a minute.  Finally, stir in spring onions. Serve immediately with shredded lettuce on the side (I like mine dressed with a dash or two of soy sauce) and steamed jasmine rice.