“No one asked me about my feelings until I was 27.”

Todd Bennett, the "Lizard Cowboy of Brady Street," reflects on his life. 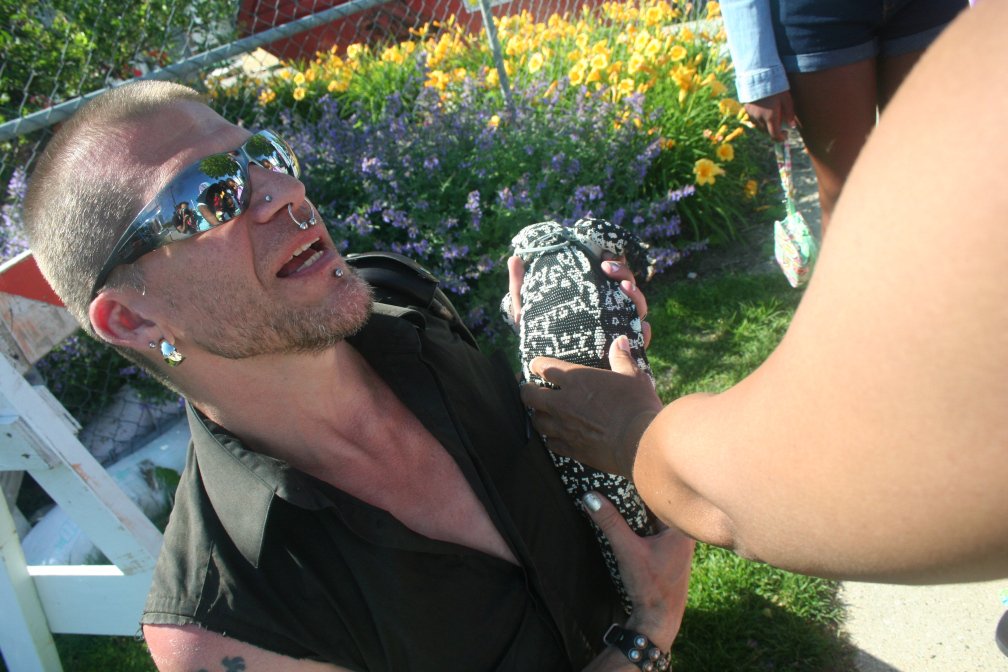 Todd Bennett sits on a patch of grass on the corner of Kilbourn and Van Buren in East Town with Simmons, the pet lizard he’s owned for 12 years.

The man who’s been called “The Lizard Cowboy of Brady Street” takes time to answer the many questions of passersby. If you ask, he’ll even let you take a picture with her.

But there’s more to this man from Mason City, Iowa, than meets the eye. “I call it Mason Jar City, Iowa – nothing gets in or comes out,” says Bennett. “But I managed to leave.”

“It’s a place that I was quite glad to leave”

“It got to be very dangerous,” says Bennett. “If I went three blocks from the house I got harassed or attacked.”

But Bennett says that’s how it’s been all his life; he was “infamous” in his hometown of 45,000 people. “I’m a very flamboyant person and I like to express myself visually – I want to be a pink flamingo on the lawn instead of a blade of grass.”

Bennett feels this animosity is simply some people’s reaction to seeing someone who looks or acts differently: “People build up their own esteem by putting someone else down and anything that’s not traditionally ‘right’ is wrong,. I don’t know why a free country like America treasures conformity so much.”

“People didn’t seem to understand and I left before I got stabbed or shot or whatever,” says Bennett. “I didn’t think I’d live to be 30 but I’ve beaten it by 20 years, now.”

Though he escaped his hometown, Bennett said he’s still harassed every now and then. “It happens probably, well, every so often. I mean, I think now that I’m older I’m more practiced in avoiding situations and bad vibes and things but I frequently have people that do mystifying things to me.”

“It’s like you’re out walking on your way to the library and next thing you know you’re upside down, backwards on the sidewalk with a scrape on your head and handcuffs or whatever because somebody has either attacked you or somebody’s told you to leave a place when you haven’t done something wrong and you say, ‘no!’”

“We were never really a family”

Even Bennett’s family didn’t fully understand him. From a young age, he had a deep interest in natural history and animals but his animals tended to serve more as an annoyance than anything. “My parents tolerated it but they didn’t really encourage me,” he recalls.

But, recently, Bennett spent a week in Minneapolis with his sister whom he hadn’t seen in 17 years. She has cancer. “It’s probably the last time I’ll see her because I guess she’s further along than she’ll admit,” he says.

“It was kind of weird. I got to see her twice and it was strange. She’s a little old lady now – I was used to always looking [up] and now she’s a head below me and, you know, she’s lost a lot of mass.”

Bennett’s sister is a successful businesswoman – she owns a large ballet studio and was the first female vice president of a bank in Minnesota. But she never had children, which Bennett thinks might be one of the reasons they’ve been able to reconnect. “She’s kind of taken care of me these past couple years.”

“I don’t look forward to the day I get the phone call.”

Bennett used to work in retail, both clothing and books. “I got hired at these places after being long-time customers and I like to see people get what they want and, so, I was very good at selling things on a sales floor.”

He’d been working for Downtown Books for five years before he was let go just before the economy collapsed. Bennett hasn’t been able to find anything since.

What did he really want to do? “I would have been very happy being a [zoo]keeper, anything from a keeper to a curator in a larger metropolitan zoo or museum, but, I don’t know, the academia was, the quantitative aspect of the curriculum was a little much for me.”

Recently, Bennett got his associates degree in zoology but he isn’t very hopeful that he’ll find something, at this point.

Bennett says there used to be a day when it was much easier to get a job at a zoo – if you had experience on a farm, it was a big plus. He said people think the job is all about playing with cute animals but it actually involves a lot of getting “kicked, bit and shit on.” “I was always aware of that and always willing to put up with it but I just haven’t been able to get my foot in the door,” he says. “It seems like a lot of people who work in those institutions have known somebody or have been in the right place at the right time and, now that I’m 51, it’s kind of hard to get in there, you know?”

So, instead, Bennett travels the city with his lizard, answering questions, entertaining children (and adults) and earning some tips here and there. “I don’t know. Being a flamboyantly gay man with an interest in animals has led to some very interesting social experiences.”

“I want to participate in life”

From the time he started reading British pop magazines in the 70s, Bennett said he knew he wanted something more from life. “I don’t want to watch, I want to participate,” he says.

Even the first time he got arrested was “quite a thrill,” Bennett says.  The first time he had surgery a couple years ago was an interesting experience, too. “I found that going under and coming out was quite nice.’”

And, in spite of some of his unfortunate experiences with people, Bennett tries his best to stay positive and open. “There’s enough people that I have a nice experience with, a nice talk with… but it’s a real struggle for me.”

“I try to go where people might appreciate me.”

3 thoughts on “Milwaukee Stories: “No one asked me about my feelings until I was 27.””