Hyper-local, old-style Riverwest bar is hard to find and barely touched by time.

​The setting sun bathes the southeast intersection of E. Clarke and N. Dousman streets in a radiant glow. Photo by Michael Horne

“Gee Willickers Saloon Established 1985” is the poster child for a hyperlocal neighborhood bar. Despite its corner location, neon Blatz sign and a wall-sized banner advertising its presence and duration the tavern on the southeast intersection of E. Clarke and N. Dousman streets is hard to find unless you’re looking for it.

Much has to do with its location among the warren of streets that cul-de-sac, no-outlet and dead-end their ways east of busy N. Humboldt Blvd. in the Riverwest neighborhood. Would you be able to find a place if I told you it was three blocks north of the intersection of E. Walworth St. and N. Stanley Place?

That’s part of its charm, of course, and the secluded location owes more to the calming influence of the bicycle path and the river, which lie due east, than to the hustle and bustle a block to the west on Humboldt, one of the city’s more heavily trafficked residential streets.

This shall be particularly true this weekend, when the 7th running of the Riverwest 24 will find the grand boulevard dominated by bicycle traffic and team campsites for Milwaukee’s annual Best Day Ever.

That should be a good day, then, to slip away from the crowds and into this alternative reality.

The first step is to be granted admission to the premises. This involves standing on the stoop at the front door and waiting for it to unlock with a buzzing sound. You’re in! But not so fast. Next stop is your inspection by the resident Canine Corps. It’s okay if you happen to step on their beds, and easy enough to do so, since they are scattered all over the place. These are friendly hounds who want to rest at your feet while you chat about the day with your neighbors. It helps if you bring your own treats, but you are quite likely to find one on a table somewhere. Toss it to a favorite pup, and make yourself a new friend.

Once these formalities are concluded, it’s time to grab one of the 28 backed, padded, swivel bar stools and have yourself a seat. You might chose the one at the east end of the bar, across from the glass-fronted cooler stocked with six packs of beer and maybe tonight’s snack. That’s where William “Winkie” Langlois used to sit watching his westerns on the TV above the bar, and generally keeping an eye out on the place. While you’re sitting there, you can look at a nice pastel portrait of Winkie hanging beside you. It is the only concession to art in the entire establishment. Outside, a small piece of concrete bears the name “Winkie” and the date 1997. That’s the year he died, at 76.

Winkie’s son Randy L. Langlois runs the place now, and has done so since 1985, a time of great change in Riverwest. The factory jobs that provided secure incomes for guys like Winkie were departing, as were the many taverns like Gee Willickers that lined — positively lined — both sides of E. Clarke and E. Wright streets from Humboldt to N. Holton St. and beyond. Members of the Greatest Generation like Winkie were heading south to places like Forest Home or Cavalry Cemetery, and the old Polish neighborhood grew more diverse, less stable and poorer.

However the neighborhood east of Humboldt, with its preponderance of single family and duplex residences, also had a higher percentage of homeownership compared to the west side of the Riverwest neighborhood. Some riverfront homes in the enclave are particularly desirable. Many of the oldtimers were fortunate enough, in retirement, to have had worked for companies that didn’t steal their pensions. So, although modest, the neighborhood around Gee Willickers was stable enough to hang in there during some rough times, and considerable demographic changes.

Blatz is not in tap, but neighborhood-brewed Riverwest Stein Beer is. Photo by Michael Horne

Although the neon sign out front (from much earlier than 1985, to be sure) says, “Blatz on Tap,” Blatz is certainly not on tap. Instead, you’ve got your Blue Moon, New Glarus Spotted Cow, and neighborhood-brewed Riverwest Stein Beer and IPA from Lakefront Brewery. Miller Lite takes the place of the Blatz on tap.

“The young people like the Lakefront beers,” says the bartender on one afternoon. “But the old folks, they are just fine with the Lite beer.”

Such are the small accommodations to change that even an old fashioned wood-paneled place like Gee Willickers must face in an evolving economy and changing demographic. The young folk also like the $2 cans of Tecate, which is another beer that likely wasn’t sitting in the Norline cooler back when Winkie was manning the buzzer.

But here we are in this 1,172 square foot tavern, with its capacity of 25 humans and 5 dogs, opening at noon every day and closing at bar time. It was built in 1888, almost certainly as a saloon. The City Directory lists a tavern here owned by Andrew Papka in the 1940s, it was Aliota’s Bar in the 1950s and Rudy and Helen’s Tap in the 1960s and into the 1970s. One evidence of how old the tavern is may be found in the restroom accommodations. In the early days, facilities were often only provided for men on account of the women not being in the saloon but rather at home tending to the real work of life while their husbands frittered away their nickels in places like this.

During prohibition, when this place was almost certainly a saloon, women from Winkie’s mom’s generation found out where their husbands were hanging, and decided to join in. After enough women began to have more than a couple of beers it became clear that an additional bathroom was needed, and a ladies room was added, as an afterthought, it appears, on the north wall. (See the Swingin’ Door Exchange for another exampe of this.) Still, these are cramped quarters, and you wash your hands in a sink outside the bathroom, another old-school Milwaukee touch, as is the floor-mounted urinal in the men’s room. (See “World Famous Wolski’s for another example.)

I don’t know what it is, but it’s free and people eat it. Photo by Michael Horne

A look around the place further confirms its location. Do I spot a nice leather dice cup on the bar? The mere sight of it gives me the shakes. Although the place is a licensed restaurant, the food here on a recent visit consists of a free plate of something chippy. It provides little competition for the dog biscuits. There is also an abundance of what you might call “snax.” You’ve got your peanuts, cashews, beer nuts, pretzels, potato chips, Comboz, and pepperoni sticks. A pizza oven at the bar must get some use, judging from the melted condition of the microwave that sits above it. Altogether, food accounts for 5 percent of the sales of the place. And wouldn’t you know it, there is a holiday meat raffle. Your $3 can win you a 26-pound turkey, says Kevin Hage, a past winner.

But who needs food? There is an electronic dart machine in the bar vying for space with a giant jukebox and five games of chance. They are conveniently grouped in the back room right next to an ATM. Synergy! The walls of the place are a dazzling vision of red-white-and-blue, heavy on the Mylar. Numerous signs, including one of Snoopy, wish us a “Happy 4th of July!”. This seasonal delay in decor is yet another quaint Milwaukee tavernism.

There is also the perplexing matter of what time it is. The clock above Winkie’s portrait is a half-hour off from the one above the window. The television settles the matter — “Jeopardy!” is on; it’s 6 p.m., and things get serious beneath the blue-and-white checkered drop ceiling as the sun sets in Riverwest. How about say we have ourselves another one while we’re here yet already and watch the show?

The phone rings — during “Jeopardy!” — and the bartender says out loud, “we’re here. Where are you?” and then answers it, very professionally, “Gee Willickers!” 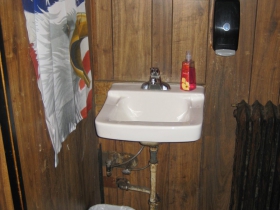 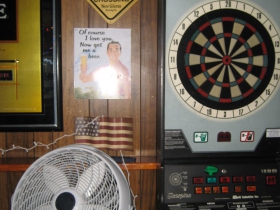 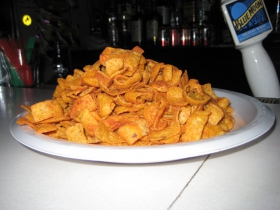 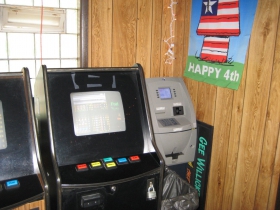 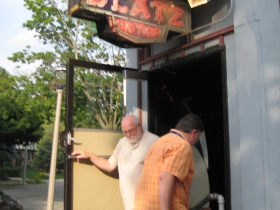 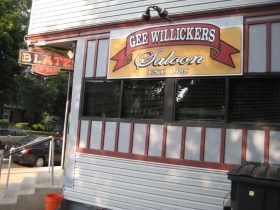