What a difference a bumper sticker can make. 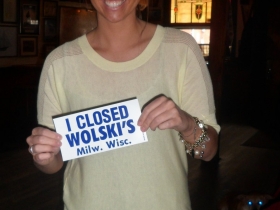 “What are the ‘I Closed Wolski’s’ bumper stickers in Milwaukee about? I see them all over Milwaukee.” The question, asked of Yahoo! Answers, was by someone wondering whether Wolski’s was some “really bad company” that people were glad to put out of business.  Most locals would probably laugh at the question. They know about the bar, though it must be said, not everyone in town has closed Wolski’s.

The bumper sticker has turned a simple corner tavern into a local institution, and one of the city’s top tourist attractions. Wolski’s bartender Paul “PJ” Johnson says concierges all over town send visitors looking for something unique to do in Milwaukee to the venerable bar.

Located at 1836 N Pulaski St., Wolski’s has been around for over 100 years. Opened in 1908 by Bernard Wolski, it was located on Brady St., but was later moved by to its current location on Pulaski St. Much of the tavern’s interior is original to the building, including its beams and back bar. The bar was actually built by Schlitz Brewery and given to Wolski’s as long as the tavern promised to sell Schlitz. Wolski’s still has Schlitz on tap, along with over a dozen other beers. Johnson says this is where the concept of a “corner bar” comes from, since any given intersection could have a tavern on every corner, each made by one of Milwaukee’s major breweries – Schlitz, Pabst, Blatz and Miller.

Wolski’s walls pay homage to the tavern’s history, as well as its Polish roots. In one spot, a photo of the bar from the 1920s hangs below a photo of the Polish Pope, John Paul II. But the most distinctive photos are from around the world, each showing an “I Closed Wolski’s” bumper stickers.

In 1973, Bernard Wolski’s great-grandsons, Mike, Dennis and Bernie Bondar, took over the tavern. Not long after (Johnson guesstimates 1977 or ‘78), the bumper sticker was introduced. It was Mike’s idea, prompted by some of the regular customers who complained they deserved something special for spending so much time there. So the stickers rewarded patrons that made it all the way to bar time on any night. In 2012, onmilwaukee.com named the bumper sticker Milwaukee’s best bar gimmick. Earning a bumper sticker has become a rite of passage for Milwaukee residents and tourists alike. But Johnson admits: “In all honesty, we’ll give you a bumper sticker any time if you really want one.” Of course,  it might not be one of the original “I Closed Wolski” stickers, but a newer one, like the white type on black background sticker saying “Occupy Wolski’s.” 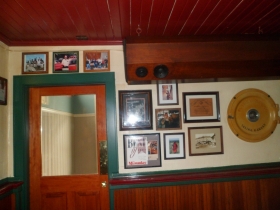 Photos from around the world. Photo taken February 23rd, 2013 by Audrey Jean Posten.

The stickers have gradually spread from Milwaukee car bumpers to places all over the world — from Paris to Japan to Aspen. Johnson says there is a whole military squadron overseas with “I Closed Wolski’s” bumper stickers covering its equipment.

Regular customer Tom “Wags” Wagner has done his part, depositing stickers in places like Copenhagen and the Virgin Islands. However, his claim to fame is putting them up in 40 to 50 Hooters restaurants. He says Hooters used to allow customers to put bumper stickers on the big aluminum hood over the restaurant’s cooking area. But after a customer complained about the bumper stickers several years ago, Hooters restaurants no longer allow them to be put up. “It’s tricky,” Wagner says about putting up stickers. “You want to find a place where they won’t be taken down.”

While Wolski’s is most famous for its bumper stickers, customers also keep coming back to play darts and chow on free popcorn. In an era of electronic dartboards, Wolski’s bucks the trend, one of the few Milwaukee taverns that still has English steel-tipped darts. The popcorn is made with the more heart healthy coconut oil instead of butter, but liberally doused with salt, a sneaky move Johnson says makes customers drink more. “It’s the perfect scheme,” he says. 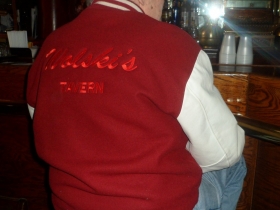 Wolski’s also sells merchandise, including hats, t-shirts, sweatshirts and underwear. Wagner recalls a time when the tavern sold lettermen jackets with Wolski’s stitched across the back, but they got too expensive, with each jacket costing at least $200. So Wagner scoured area rummage sales until he found a lettermen jacket that was just right, then had the back embroidered with the Wolski’s name. He now wears it to the bar and even contemplates going into business refurbishing old jackets with the Wolski’s name.

The regulars, like Wagner, also add a special touch to Wolski’s. “The place is so old,” says Doc Sheahan, who has been coming to Wolski’s since the late 1970s, and almost every day for the last 15 years. “If these walls could talk,” he jokes. In his younger years, Sheahan says he closed down Wolski’s maybe a half dozen times. Now he comes during the day. Walk in any afternoon on Monday through Friday and the bar is lined with the same people, he says. “They mark you absent if you come in late.” One of Sheahan’s favorite moments was when Larry the Cable Guy visited the tavern a little over two years ago to film an episode for his History Channel series, “Only in America.” Sheahan helped teach him how to play bar dice. 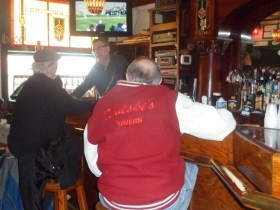 Wagner says Johnson is his favorite part about Wolski’s. Sheahan laughs at this, but Wagner sticks to his guns. “There’s only a handful of people I’d call good professional bartenders,” Wagner says. Johnson has been tending bar at Wolski’s for 22 years. He first visited the bar in his early 20s. Soon he started working there. Johnson says Wolski’s rarely needs to hire new bartenders. The least-tenured one has been around for 12 years.
Wagner says he wouldn’t really classify Wolski’s as a neighborhood bar because of all the different visitors. Yes, it’s more that that, Johnson agrees: “We’re a big regular bar, a big student bar, a big tourist bar. That’s what makes us click.” 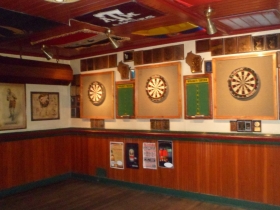 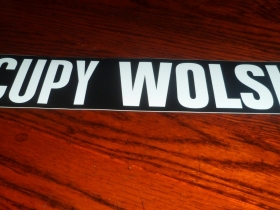