The Whimsical Journey of Marina Lee

Home for Marina Lee is a building on the southwest corner of Bremen & Burleigh, a solid brick 1904 structure with 18-inch thick walls. Located at 833 E. Burleigh, the former Schlitz tavern has been embellished with Lee’s trademark touches, colorful crown molding and purple and metallic gold planters.

Directly to the east is a delightful little community park, Snail’s Crossing, which she helped create in 2003, and newly refurbished in 2012 under the direction of Lee and a cadre of dedicated local citizens. It is a lovely mix of nature and art, with trees and a garden blended with sculptures of tall Suess-like creations and a whimsical caterpillar, colorful planters and a walkway of various-shaped, brightly painted tiles. It’s fun but not overbearing, with an appeal for children and adults alike.

Many hands helped refurbish Snail’s Crossing: Teens from Mayor Tom Barrett’s 2006 “Summer Youth Work” initiative, and in 2009,  Pierce Elementary and Arts @ Large students created ceramic “tents,” pyramid-shaped vessels with one side for trash and the other side for recyclables, much of it underwritten by a Wisconsin Arts Board grant.

The grand opening in the fall of 2012 was the culmination of a year-long fundraising push, plus a grant from the Milwaukee Arts Board maintenance fund, a fund used to help preserve various Milwaukee sculptures. Snail’s Crossing’s funky interactive sculptures were repainted, bench seats repaired, sanded and sealed. Donor tiles were remade and a 30 foot x 12 foot section of walkway was embellished with mosaics. Perhaps most important, the Riverwest Neighborhood Association helped establish a formal committee for the park, and it operates as fiscal receiver for donations.

Riverwest is Lee’s “community,” but what does that warm fuzzy word, often used by agenda-driven others, signify? For Lee, it’s simple: her hard-earned talents, plus the talents of other neighbors, strengthen the area where they live and work. It really is “by the people; for the people.”

The end result has helped revive the 3000 block of North Bremen, which back in the 1930s was “the worst place to live,” a dusty dirty coal-crushing place. That’s how its described by writer and Riverwest resident, Tom Simasko, in a Faces and Voices, an informative book sold to help sustain the park.

When the coal crushing business ceased around 1945, an office building on this site was converted to house WWII veterans. It wasn’t until 1960 that 3050 North Bremen was in the early stages of becoming a park site.

It was the year of Marina Lee’s birth.

Raised in Brookfield, she attended Waukesha South High. “It was the beginning of the suburbs,” she recalls, “still rural enough with a farm down the road and we could ride our bikes in all directions for 15 miles.” In 7th grade science, she and a friend shaped a project about “the cell as city.” While her friend wrote, Lee drew, and discovered a way to communicate. At age sixteen, she and a friend visited a Milwaukee art gallery, which she found a “rather haughty” experience, but she also got to see “Janitor,” a 1973 Duane Hanson realist sculpture that slouches in a corner at the Milwaukee Art Museum. It helped fuel her ideas about the possibilities in art: after all, the balding man in the olive-drab work clothes was a regular guy, proof that all art needn’t be snobbish.

Following her 1977 high school graduation, Lee meandered her way to a career as an artist: she worked on a Mukwonago farm (she loved horses) for four years, explored classes at UW-Whitewater, traveled and worked in Florida and got a job at a dirt track for horse racing in Oklahoma.

Her next stop was the Milwaukee Institute of Art and Design, where she graduated in 1986 with a bachelors in fine arts. A number of her huge glorious abstract paintings from that era line her studio walls, oddly juxtaposed against wildly fun sculptures, many of which you’ve probably seen populating local school playgrounds.

After MIAD, Lee took additional courses at the Pacific Northwest College of Art in Portland, Oregon. She lived for some time on the Pine Ridge Indian Reservation in South Dakota, where her daughter, Justice Ulyana Chipps was born. The two returned to Milwaukee, and Lee credits MPS schools (both Elm Creative Arts and Roosevelt) for providing her daughter with a superior education. Now in her 20s, Justice has helped her mother in the studio under the umbrella of an LLC, “Beginning Dreams Forever,” incorporated in 1992.

Lee has carved out a career as a sculptor, painter and public art creator. She has sold her art works at festivals across the country while avoiding art galleries. “Galleries take 40 to 50% and it only costs me 30% to go on the road, so I can sell my stuff cheaper and faster,” she told the Riverwest Currents.

She also does a lot of public art projects and artist-in-residence programs. She has done more than 200 such projects for schools, parks, libraries and other organizations, having worked for two decades for the state’s “Artist-in-Education” programs.  “The art process is the root of life-long learning,” she says.

Lee lives upstairs in the converted tavern she purchased in 1997, while the first floor is her studio. Touring it is a bit like stepping into a forest of magical creations. Her workspace is neatly divided into distinct art-making areas, but as a whole it somehow signals that she’s more about involving her community in projects, rather than isolating herself in a gallery where people ogle art.

She’s also concerned about the professional side of being an artist,  i.e. how to retain intellectual rights in the arts and maintain status as a business, and not be treated strictly as an “artist.” She sees problems with the non-profit system and the granting system. One gets the feeling she thinks it’s often a grab for power by a few, while those who would most benefit from the system are left out.

A neighborhood, by contrast, is closer to the people. Her greatest joy comes from working with neighborhood organizations. “It’s all about Needs vs. Wants,” she says. “It goes beyond what one person wants…it’s about what best meets the needs of the community.” 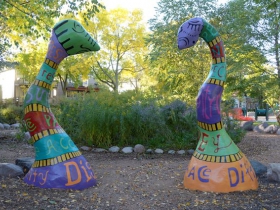 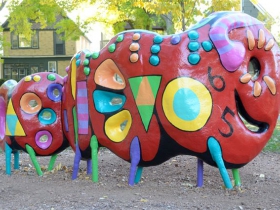 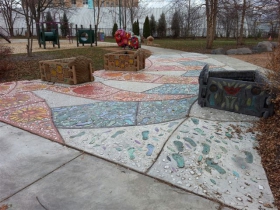 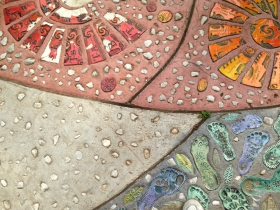