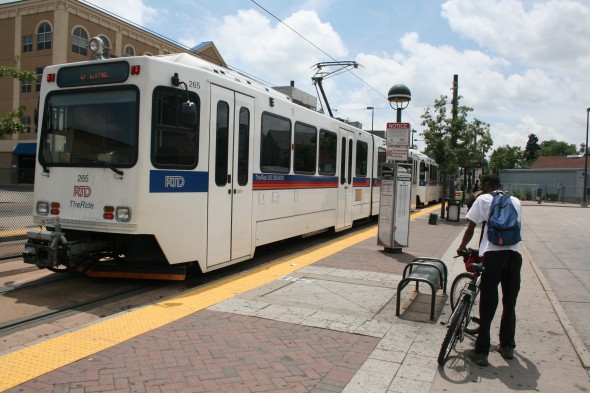 Denver Light Rail as seen in 2012. Photo by Jeramey Jannene.

Civic leaders gathered this morning to hear success stories from Cleveland, Denver, and Oklahoma City. Tim Sheehy and the Metropolitan Milwaukee Association of Commerce, as part of their Cultural and Entertainment Needs Task Force, hosted the guest speakers at the Marcus Center for the Performing Arts for a discussion on the success of their cities. Moderated by Sheehy, the discussion centered around what steps the cities have taken to attract new businesses and residents. The big surprise — certainly for Sheehy, it seemed — was how much the speakers emphasized the need for good transit.

Kelly Brough, president and CEO of the Denver Metro Chamber of Commerce, had the most straight-forward quote of the day. Speaking about millenials she said “this generation wants transit, they want amenities. They want it all downtown.”

The leaders from Denver and Oklahoma City began their remarks by noting all the lists they’re on, and how those two cities are similar. Joseph Roman, president and CEO of the Greater Cleveland Partnership, had a different message though. He noted multiple times how Milwaukee and Cleveland are peer cities, and appear on the same lists (he didn’t mention any specifically, but his attitude indicated they weren’t the same rosy ones Denver and Oklahoma City are on).

Roy Williams, president and CEO of the Greater Oklahoma City Chamber, noted that in Oklahoma City “we all followed Richard Florida.” But he mentioned for a long time most of them didn’t believe in Florida’s creative class gospel. He noted that they’ve now changed their mind and when it comes to attracting millennials, it is all about place.  Williams said  Oklahoma City has 130,000 college students in the region, and has managed to increase from a graduate retention rate that was below 50 percent to its current rate of 90 percent.  He, too, emphasized that young people want transit and amenities, and Oklahoma City has been able to figure that out with their MAPS (Metropolitan Area Projects) program.

Following a question about doing projects mainly downtown, Williams offered a line he says his mayor often uses: “you can’t be a suburb of nothing.” Noting that the health of its downtown is good for a region as a whole,  Roman said “downtowns are what makes our regions thrive.”

Joseph Roman said Cleveland couldn’t expand their transit system between the city’s two hubs (Downtown and University Circle) until both were thriving. According to Roman, the link they built between the two, the bus rapid transit Health Line, now has economic development at every stop, and has played a part in the city’s revitalization.

Those in the audience seized on the discussion of transit. Nina Jones, executive director of the Bel Canto Chorus, asked about how the other regions achieved their transit success. Brough, a former Chief of Staff to Denver-mayor-turned-Colorado-governor John Hickenlooper, jokingly noted that the key to their passing FasTracks (a sales-tax funded, multi-billion dollar transit expansion to eight counties) was traffic jams. On a more serious note, she noted they had failed a couple times to pass legislation, but were finally able to build a large enough coalition that yielded a project that has been “transformational for us.”

Professional sports stadiums were central to the conversation, and frankly were the reason the MMAC was willing to fund this event. The MMAC has made no secret of their desire to see a new arena for the Milwaukee Bucks, lest they become the Seattle StarBucks, given the NBA edict that Milwaukee build a new arena by 2018.

Each of the chamber leaders had their own story of how they handled pro sports. Cleveland used revenue from an alcohol and tobacco tax to replace an outdated Cleveland Municipal Stadium for baseball’s Cleveland Indians and move the NBA’s Cleveland Cavaliers downtown, but also lost the Cleveland Browns to Baltimore (only to get a new team after agreeing to build a new stadium with public money). Denver spent aggressively to land a new baseball team and build a downtown ballpark, built a new football stadium on the edge of Downtown, and built a new NHL/NBA stadium, all using different sources of funding. Brough noted that Cleveland’s recent sin tax extension to pay for maintenance of the facilities was smart, which served a word of caution that maintaining massive public buildings might cost as much as building them in the first place.

Oklahoma City took the most unusual trek to landing their professional sports team and arena. As part of their MAPS program, voters approved building an arena, but without a big-time tenant and with a provison that no bonds be used. The arena thus could only be constructed once all the funds were in-hand (lowering the cost to build the arena by eliminating the interest expense). The city hoped to lure a NHL franchise, but lost out to Columbus, Ohio. They ultimately got the NBA’s Oklahoma City Thunder after a group of Oklahoma City businessmen bought the Seattle SuperSonics and saw efforts for a new arena fail in Seattle. Williams said he was glad to have a pro sports team and had gotten sick of only being asked about college football when he flew somewhere. He noted that professional sports crowds are more representative of the community, while college crowds are made up of students, alumni, and donors.

Roy Williams of Oklahoma City, a city that until recently wasn’t known for its urban environment, closed his remarks by warning that Milwaukee faces an urgent issue, because the country is becoming increasingly urban and there will be winners and losers when it comes to regions.

With so much emphasis from outside leaders on the value of transit, will it be added to the discussion here? It should.