Bruce Murphy, Dave Reid and Jeramey Jannene offer their take on how to build a better city.

No, Milwaukee isn’t a great city yet, but it has made notable improvements. What more needs to be done? Below is our wish list for 2014.

We’ve limited ourselves to five wishes apiece. Feel free to offer your own wishes in the comments section, or for that matter, your disagreements with our list. We’ve got thick skin, we can take it. 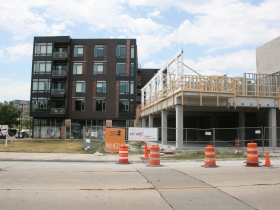 Hopefully the third phase of The North End will break ground in 2014. Photo by Dave Reid.

The streetcar as it meets Broadway in the Third Ward.