Is Walker to Blame for Poor Job Growth?

Liberal and conservatives adamantly disagree. What does the data show?

Recently the Journal Sentinel published a commentary by Marc Levine titled Gov. Scott Walker to blame for poor job growth. This was followed a week later by Gus Ramirez’ commentary, The real reason Wisconsin growth lags? It’s not Gov. Scott Walker, only to be followed by Why is Wisconsin lagging other states on jobs? by Oshkosh economics professor Kevin McGee.

By this time there is little doubt Wisconsin has lagged the nation and most of its neighbors in job growth since Walker took office. Wisconsin ranks around 34th among the states. If it had grown at the same rate as the US or neighboring Minnesota, Wisconsin would have about 50,000 more jobs. A comparison with other neighboring states puts the gap at 20,000-30,000 jobs. Even the very Walker-friendly American Legislative Research Council, in its 2014 edition of Rich States, Poor States, rates Wisconsin’s economic performance as 44th among the states.

The problem arises when it comes to assigning a cause for this performance. A mantra in statistics is that correlation does not prove causation. Studies by political scientists have found that voters tend to credit governors when times are good, and blame them in bad times, even when the causes are clearly beyond the control of the governor. For example, when world energy prices are high, governors in energy-producing states such as Texas tend to be more popular than when prices are low.

Unfortunately we cannot run a lab experiment in which Tom Barrett wins the election and then sit back and see what happens to jobs. Thus we must turn to less definitive analysis. 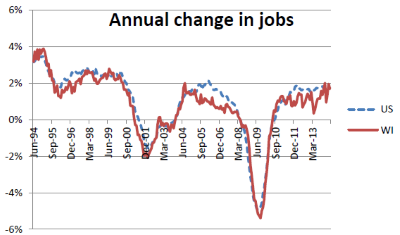 First, we need to recognize that Wisconsin’s economy rides that of the nation, as shown in the graph. When the nation prospers so does Wisconsin. Any comparison between two time periods using Wisconsin data that does not take into account national data for the same periods is likely to be of little value. It is unfortunate that both the Walker and Mary Burke campaigns have fallen into this practice.

A second observation is that Wisconsin has experienced a downward trend over the last 20 years in its percentage of the nation’s jobs, as shown in the next graph. One notable pattern is that Wisconsin tends to hold its own or even gain on the nation when the national economy is weak. Perhaps Wisconsin employers are more reluctant to lay off workers when times are bad. 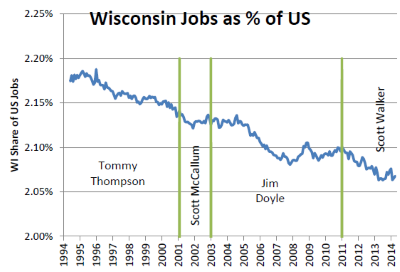 Wisconsin Jobs as % of US.

The second graph also shows job growth in each governor’s terms. It is likely that a governor’s supporters would claim he was responsible for good times and that other factors were to blame when the results weren’t so good. Opponents might follow the opposite pattern. The Levine and Ramirez articles fit this pattern.

Critics of Governor Jim Doyle’s economic policies—and by extension Mary Burke’s—tend to concentrate on the period from 2005 to 2007. While Wisconsin’s economy was growing—and unemployment was between 4.7% and 4.8%–Wisconsin jobs were not growing as fast as the nation’s. In an earlier article I suggested alternative explanations for this, notably that Wisconsin’s housing bubble was smaller than that of the nation and the national trend to off-shoring manufacturing hit Wisconsin harder than states with less manufacturing intensity.

In the final year of the Doyle administration, jobs started growing both nationally and in Wisconsin. Breaking the traditional pattern, the growth rate was greater in Wisconsin. After Walker became governor, Wisconsin jobs continued growing, but at a rate less than the national rate. This leads to the question; did Walker’s policies have something to do with this? With other policies would Wisconsin have continued the growth of the final Doyle year? Or was Wisconsin fated to return to its historical behavior of growing less than the nation?

Let’s start with Ramirez’ argument. It should be noted that the company he heads, Husco International, has a reputation as being well-run and gaining market share as a supplier to the automobile industry based on innovation and attention to quality, a justified reputation in my experience. It has facilities in Waukesha and Whitewater Wisconsin as well as China, India, England, and Maquoketa, IA.

Ramirez starts by criticizing Obama administration policies, but it is hard to see how these would affect Wisconsin differently than other states, and he does not pursue that track. He then zeroes in on two factors that in his view account for Wisconsin’s sluggish growth.

The first of these is uncertainty caused by the recall re-election. Governor Walker has also pointed to this and predicted that once the recall was over, Wisconsin would take off. But this didn’t happen; if anything Wisconsin growth fell further behind after the recall. Ramirez then suggests that uncertainty about the upcoming election is the culprit. He doesn’t say what business-friendly policies would likely to be reversed if Burke were elected. As I discussed in a previous article the chance of Republicans losing control of the legislature is remote, so it is unlikely any legislation opposed by the business community would be enacted.

The second factor is problems with the Wisconsin workforce, which he blames on the Milwaukee Public Schools. He claims that to fill 250 jobs in Milwaukee, Husco would have to interview 5,000 applicants and the initial 250 employees would turn over several times. He does not cite any source for this estimate. It seems unlikely it would be based on Husco experience, since its workforce is likely drawn from Waukesha, Jefferson, and Walworth counties. Was this estimate based on the experience of another company? We cannot tell from the article.

Both Ramirez and another outspoken critic of the Doyle administration, Richard Uihlein, owner of the Uline Company are long-time Republican donors to Republican causes. Thus one has to wonder how much of their complaint reflects their partisan orientation and how much is an unbiased view of the Wisconsin business climate. Ironically both men’s companies received substantial grants from the Doyle administration.

Levine’s argument reflects a controversy that has been going on nationally since the start of the Great Recession: whether the economy is best healed by government stimulus funding intended to move money into the hands of consumers who will spend it, or whether the solution is to restore confidence by reducing government deficits. When I took my first economics course many years ago it appeared this question had been definitely settled by the Great Depression in favor of stimulus to bring the economy back to normal. People pointed to 1937 when Roosevelt panicked over deficits, cut back spending, and the Depression returned. Or to the fact that the Depression never ended until massive military spending in anticipation of World War II.

The argument goes something like this: in an economic crisis the rational action for individuals is to cut back spending. But one person’s spending is another’s income, setting off a downward spiral of decreased spending, decreased income, and growing unemployment. The only entity that can counteract this spiral is the government.

Compared to the federal government, states are limited in what they can do to counter a recession. When tax revenues go down they cut spending to balance their budgets. Yet even within such limits there are things the state can do to stimulate its economy. Accepting proffered federal money is one. Had Walker accepted federal funding for high speed rail and Medicaid expansion, this would have put more money in consumers’ pockets without requiring cuts elsewhere in the budget.

How a state budgets may also make a difference. As McGee points out, balancing the budget through furloughs (as Doyle did) may have less impact on consumer spending than shifting the cost of benefits to employees (as Walker did). The first is regarded by the employee as a temporary cut in income, while the latter is considered permanent. Even if a state budget seems held together with baling wire, holding off on spending cuts until after the crisis passes may be the better part of valor.

This is the model both Levine and McGee offer. It has the advantage of explaining why job growth that was better than the nation in the first year of recovery became worse in the years that followed. Before accepting it as an explanation for the Walker jobs record, however, we need more quantification. Are the effects of turning down federal funds and cutting public employees’ effective income sufficient to explain the Wisconsin jobs gap? In most cases, it appears that no one has done the calculations. An exception is a recent report from the Council of Economic Advisers that estimates the effect of states turning down funds for the Medicaid expansion, which estimates it will cost Wisconsin 2,500 jobs in 2014 and 5,500 next year because of the ripple effect of the additional federal funding.

If economists were to use the same factors that, say, the Congressional Budget Office uses, and then calculated jobs lost from the decisions to forego federal transportation or Medicaid funds or reduce public employee buying power and the ripple effect on the state economy, how close would they come to explaining the Wisconsin job gap? Wisconsin would be well served if it had an organization doing such economic analysis without a stake in the outcome.

3 thoughts on “Data Wonk: Is Walker to Blame for Poor Job Growth?”