Which Governor is Best At Growing Jobs?

The truth is far more complicated than either party would claim.

Because Gov. Scott Walker promised to bring 250,000 new private sector jobs to Wisconsin, there has been considerable attention to his record, and to that of his Democratic predecessor, Gov. Jim Doyle. Walker, for instance, has made comparisons suggesting the economy did very poorly under Doyle. It is useful, therefore, to take a look at the record.

At times Doyle did worse and at other times better than the nation did in growing jobs. Take the period from January 2003, when Doyle took office, to early 2008. As shown below, Doyle entered office at the end of a mild recession. During his first two years employment growth in Wisconsin closely tracked national employment, but later fell behind. 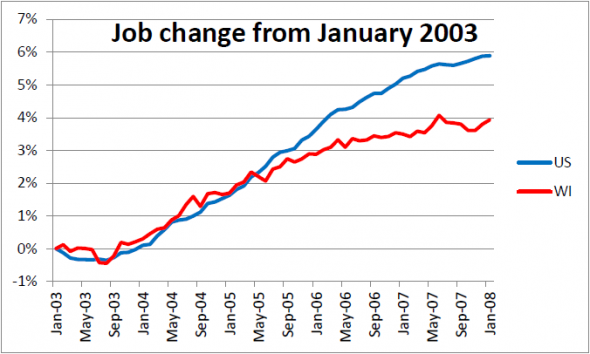 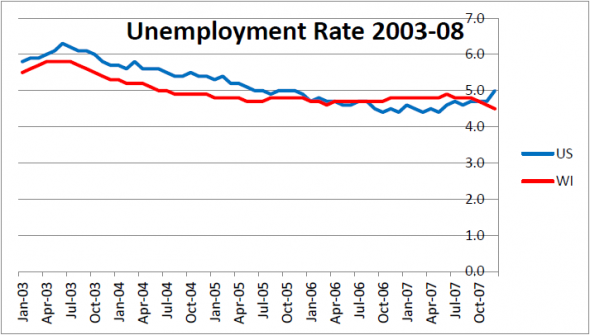 In January 2008, jobs hit a peak both nationally and in Wisconsin, and then turned down, soon dropping drastically. They hit bottom by early 2010 and then started a slow recovery. Wisconsin fared somewhat better than the nation during this period. Its job loss came later and was slightly smaller than if it simply followed the national average. And its recovery slightly exceeded the national average. 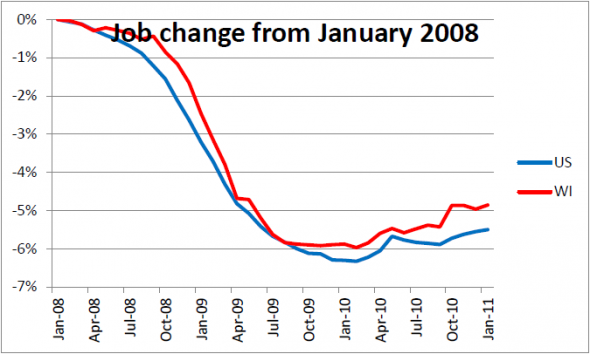 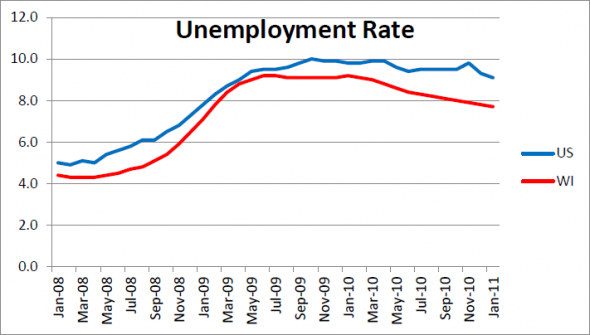 In comparing state and national job trends, it is striking how similar their shapes are. When the national economy is booming, Wisconsin adds jobs. When it falters, Wisconsin sheds jobs. Still there are differences. Should Doyle be blamed for the smaller job growth between 2005 and 2008? If so, should he then get credit for the better performance in Wisconsin once the recession hit? To answer these questions, it is useful to ask whether there were economic trends that might have had a disproportionate effect on Wisconsin.

One candidate is the housing bubble. A number of studies have found that when the value of their homes increase, people feel richer and spend more. Wisconsin had its own housing bubble, but its peak was lower than the average nationally. In fact, during the period that Wisconsin’s house prices lagged behind national growth rates so did its job growth. Lower growth in home values in Wisconsin could be expected to result in lower spending growth, resulting in turn in lower job growth. 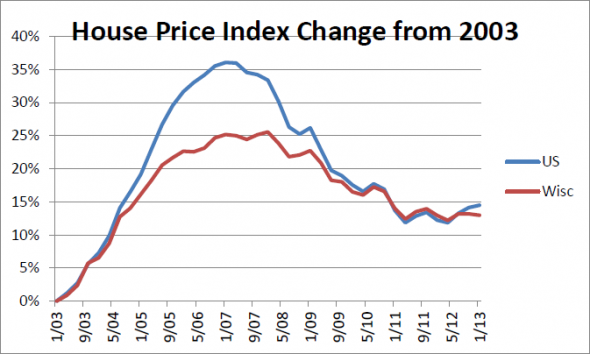 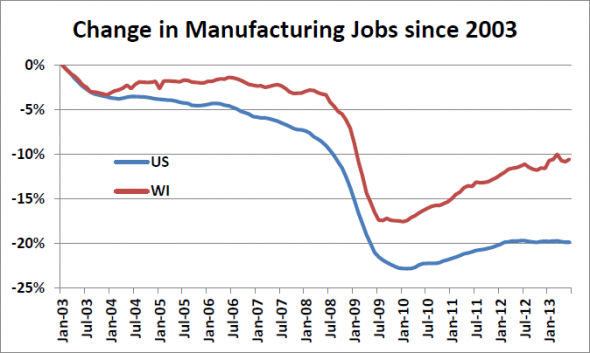 Studies by political scientist Larry Bartels and his colleagues have found that voters reward incumbents when times are good and punish them when things turn sour even when the causes are clearly beyond the incumbent’s control. For example, one study of European elections in the Great Recession found that countries with conservative governments elected parties to the left and those with socialist governments elected conservatives. A study of US elections found that incumbent governors in energy-producing states were more likely to be re-elected when oil prices were high than when prices were low. A similar pattern was found in Midwest states with heavy manufacturing: when manufacturing prospered, incumbents were re-elected, but they were likely to lose when it shrank.

Blaming the incumbent without considering other possible causes is not limited to voters. An article titled “Wisconsin flunks its economics test” by Thomas Hefty and John Torinus, two well-known business leaders, appeared in July 2009. Although the Great Recession was well under way at the time, the authors concentrated on the period when jobs were growing but at a lesser rate in Wisconsin than nationally. They gave no attention to other factors that could have contributed to the gap such as the manufacturing shrinkage or Wisconsin’s anemic housing bubble, and are surprisingly vague on what they think the Doyle administration did wrong. They are clearly members of the “blame the incumbent” camp, declaring “For better or for worse, Gov. Doyle has been at the helm during this slide.”

Trying to separate outside factors from those under the control of an incumbent governor is difficult enough under the best of circumstances. But often commentators start with a conclusion and cherry-pick data for evidence that supports that conclusion. Sometimes their motivation is political and sometimes ideological.

In reality, we do not fully understand why some states prosper and others struggle or why their relative economic positions often change over time. Yet there is no shortage of advocates of one or another policy eager to selectively interpret the results to their advantage. At a minimum it is wise to recognize that states are heavily influenced by national economic trends, and that state government policy is only one factor of many influencing a state’s economic success.

4 thoughts on “Which Governor is Best At Growing Jobs?”