Why is population growth here better than in most Great Lakes states? 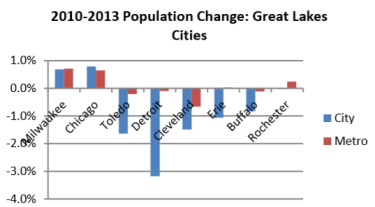 The Census Bureau recently released its 2013 population estimates for cities. When combined with earlier estimates for counties and metropolitan areas, these tell a continuing story of the challenges faced by cities along the Great Lakes.

Of the eight largest Great Lakes metropolitan areas, only Milwaukee and Chicago saw population growth in the city itself. As can be seen, population shrank in five of the other six cities (Rochester was essentially flat). In those cities, the historical trend of movement from city to suburbs continued, so that total metropolitan population was flat. Although not shown here, the same pattern appeared in smaller cities along the Great Lakes, including those in Wisconsin. 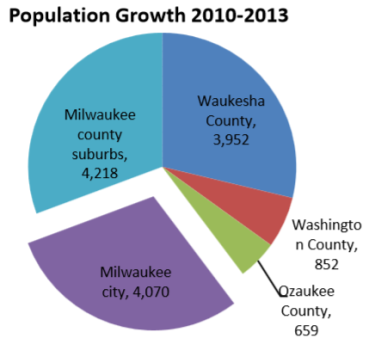 Growth in the Milwaukee area, although low by national standards, was distributed widely. About 60 percent of the increase occurred in Milwaukee County, evenly split between the city and its suburbs. The other 40 percent took place in the so-called “WOW” counties—Waukesha, Ozaukee, and Washington.

The city’s growth comes despite well-publicized challenges, including homes that have been abandoned or foreclosed, a new state law abolishing residency requirements for municipal employees, and continued concern about school quality.

For the Milwaukee area, these results can be viewed from either a “glass half full” or a “glass half empty” viewpoint. Both pessimists and optimists can see support for their positions:

The weak performance of all Great Lakes cities suggests there’s a regional problem here. Has the previous success of these cities helped create a culture that resists adapting to a changed environment?

In the past, low-cost lake transportation of raw materials such as iron ore meant that manufacturers clustered along the lakes. As global supply chains became more efficient this advantage seems to have become less and less important compared to labor costs when it comes to mass production. Yet governmental efforts to boost the regional economy have still concentrated on lowering manufacturing costs, such as Wisconsin’s very favorable tax treatment of manufacturing.

John Torinus and Tom Hefty have argued that this financial support for manufacturing comes at the cost of supporting other industries that are creating more jobs, such as information services. In addition, this emphasis on reducing the costs of manufacturing could reflect nostalgia for old-style mass production, rather than for manufacturing that competes on responsiveness, innovation, and flexibility.

For optimists, the more positive growth for Milwaukee would imply that its emphasis on competing to create an urban lifestyle is starting to bear fruit.  Why are Chicago and Milwaukee doing better than the other Great Lakes cities? One possibility is that both cities are ahead of their peers when it comes to quality of life. For instance, the other cities allowed most of their lake front to be devoted to manufacturing or warehouses.

Increasingly, it appears, success will be based on whether a city creates the kind of environment that attracts well-educated people. There is growing evidence that efforts to attract innovative companies have it backwards: rather than concentrating on attracting the companies, regions should concentrate on creating an environment that will attract the people who years later will start the companies that then attract the people these companies will want to hire.

Time will tell whether the reversal of the previous trend towards hollowing out of the core city will continue over time or turn out to be a temporary phenomenon that will end as the economy strengthens. But what’s happening in Milwaukee does seem consistent with trends around the country showing the increased popularity of cities that offer an urban lifestyle.