Milwaukee Is a Great Lakes Star

The US Census Bureau recently released its 2013 population estimates for counties and metropolitan areas (estimates for cities are due in July). While such estimates should always be treated with caution, these offer support for my previous reporting suggesting several trends are continuing:

The city of Milwaukee’s population peaked in 1960. Milwaukee County’s peaked a decade later. As can be seen below, subsequent growth (from 1970-2000) in the metropolitan area came in the three suburban counties that the Census Bureau includes in the Milwaukee MSA. 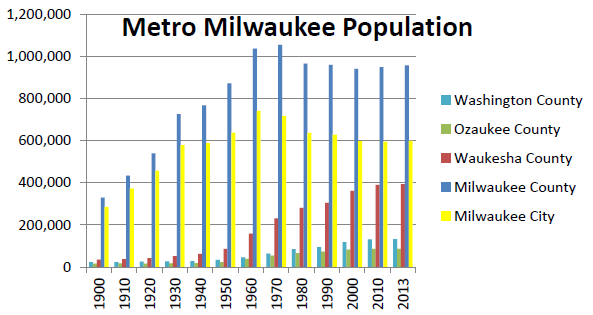 The latest estimates show Milwaukee County adding more people than the three suburban counties combined as measured by count, and at about the same rate as measured by percentage growth. 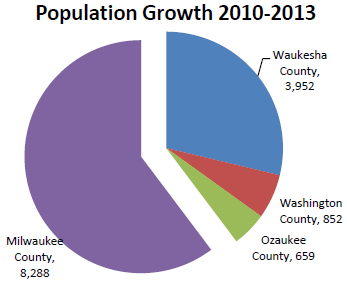 Again these numbers should be treated with caution, since they are estimates and cover a short period, but they seem consistent with trends in much of the US, reflecting the increased popularity of urban centers.

As Wesley Edens, one of the two businessmen buying the Milwaukee Bucks told the Milwaukee Journal Sentinel: “It’s a great Midwestern city. It’s the classic city (in which) the downtown over time became less relevant as you built up the suburbs. I think it’s a great opportunity for the city to kind of reinvent itself from an urban perspective.”

Wisconsin is becoming increasingly urbanized. Rural Wisconsin continues to lose population, as described in an earlier article. Three quarters of counties with populations under 60,000 lost residents during the three year period.

Most cities located on the Great Lakes are either losing population or have weak growth compared to the U.S. growth of 2.2 percent during this period. The figures in the chart below are for the metropolitan areas (MSAs), so they do not reflect a shift from cities to their suburbs. 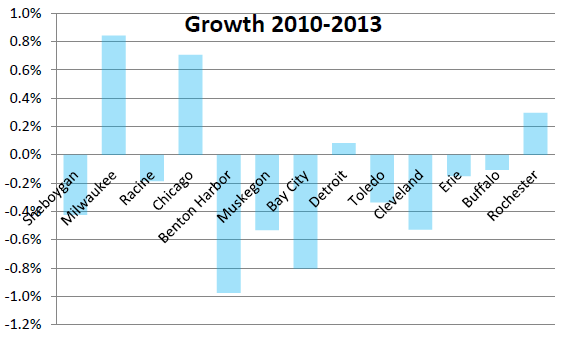 Compared to other cities on the Great Lakes, Milwaukee (followed by Chicago) is the standout for population growth. This raises a number of questions: Does the weak performance of cities of the Great Lakes stem from common causes or just coincidence? Perhaps the very success the lakes brought to their cities as industrial and commerce centers makes it harder to respond to shifts in the economy. But why has Milwaukee outperformed its peers?

There has been remarkably little study of these issues. But if Wisconsin is to prosper, these are the kinds of questions that need tackling.

10 thoughts on “Milwaukee Is a Great Lakes Star”