The recently released 2012 population estimates from the US census tell several stories. Not surprisingly, one is that Wisconsin did not have a lot of growth. Consistent with Wisconsin’s poor job growth during this period, its population grew by 0.65 percent, compared to 1.48 percent for the US as a whole.

A second story: what growth there was came largely in urban areas. Madison particularly grew, easily beating the national average. The Madison experience is repeated in college towns around the nation, which grow faster than their states. The challenge for Madison and the others will be how to keep the growth from destroying the environment that makes them attractive in the first place.

While lagging well behind Madison, Milwaukee and its surroundings also grew. Putting Wisconsin’s two largest metropolitan areas together, they accounted for 72 percent of the estimated population growth while only having 38 percent of the people.

If the Fox Valley (the Oshkosh/Neenah, Appleton, and Green Bay metro areas) and Kenosha (part of the Chicago metro area) are added, the calculation becomes: 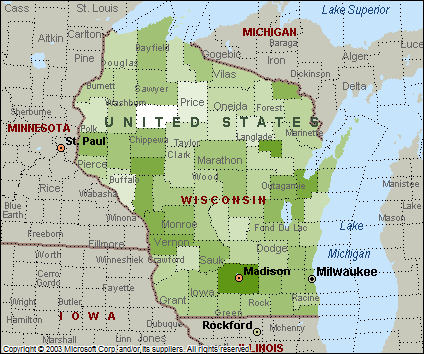 If there is any pattern to population growth it is that counties with small populations were less likely to grow; rural and small-town Wisconsin is shrinking.

While Milwaukee’s population growth is small from a national viewpoint, it stands up well when compared with other cities on the Great Lakes, as the chart below shows, with population changes in both the cities and their surrounding metropolitan areas measured. Milwaukee stands with Chicago as the best performers among this group. The statistics suggest that all the cities bordering the Great Lakes are facing a challenge as they attempt to find a new role following the decline of their traditional manufacturing base.

Within Wisconsin itself, the smaller cities along Lake Michigan also lost population during this period, probably reflecting a loss or downsizing of traditional manufacturers:

Finally, let’s take a look at what is going on within the Milwaukee metropolitan area itself. All the metropolitan counties grew during this period, but Milwaukee and its close-in suburbs had more growth than the surrounding counties.

It should be emphasized that these figures cover only two years. Extrapolating them to forecast future trends is risky, particularly if the economy continues to recover. Even so, they seem to reflect several national trends:

Here are some further observations: