Decline of the Dairy State

Walker’s policies may help depopulate farms. How will cities be affected? 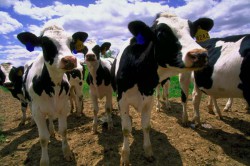 Recently released US Census population estimates show that rural Wisconsin is continuing to lose population. A majority of Wisconsin’s counties — 40 out of 72 — lost residents between 2010 and 2013. This loss was heavily concentrated in the most rural counties. The average 2013 population of counties losing population was about 37,000 while the gainers had 130,000 people on average. (Several counties with mid-sized urban areas are also losing population, notably Racine and Sheboygan.)

Adams County is an example of this trend. Out of a population of about 21,000 it lost 400 residents in three years. If this trend continues, Wisconsin will see increasing population in its largest urban areas surrounded by shrinking rural populations.

A similar trend has been noted in many parts of the U.S. In part, this reflects the increasing advantage cities enjoy in fostering innovation and entrepreneurship. But bad government policy also contributes.

A recent article in the Milwaukee Journal Sentinel describes opposition in Adams County to a proposed dairy farm with 3,100 heifers. Because of its size, this operation is considered a concentrated animal feeding operation or CAFO. The opposition centers around the operation’s potential for water pollution and odors. Neighbors’ concerns are not helped by the operator’s very poor record when he ran a feed lot on the site. Nor are they reassured by plans for another CAFO with 4,500 cattle a half mile away.

It appears the Wisconsin Department of Natural Resources is bending over backwards to allow the proposed operation. Rather than applying the normal state nitrogen standard of 10 parts per million it is proposing a much more lenient standard of 28 parts per million. While the article is not entirely clear on the DNR’s rationale, it appears the higher limit is because of groundwater contamination already existing due to the previous operation.

Because CAFOs concentrate a very large number of animals in a confined space they present far more challenging water pollution and odor issues than the typical Wisconsin dairy farm of a hundred animals. These so-called “factory farms” are increasingly controversial because of their impact on animal welfare, public health, impact on rural communities, and the quality of food for humans, in addition to their environmental impact. (The Pew Commission on Industrial Farm Animal Production offers a thoughtful discussion of these issues.)

Despite these concerns CAFOs have been growing, both in Wisconsin and nationally, because they offer higher productivity. The upside of higher productivity is that it helps reduce prices. The downside is that, by definition, it decreases labor demand. This is particularly true if, as with milk, demand for the end product is decreasing. And less labor means fewer people on farms. According to an article in the Wisconsin State Journal, Wisconsin has been losing dairy farms at an average rate of 470 per year over the past decade.

Although there are many possible contributors to the depopulation of Wisconsin’s rural counties, the rapid expansion of CAFOs is certainly a factor. Fewer farmers means fewer people in rural counties and that, in turn, means fewer customers for local businesses.

The growth of CAFOs also runs counter to certain trends in urban areas, including the growing interest in purchasing more natural and unique products, in knowing more about food sources, and in humane treatment of farm animals.

Faced with declining demand, a business like dairy farming can consider two very divergent strategies. One would concentrate on further reducing costs. The other would find ways to add value for the customer. The present race for governor presents an opportunity to compare the costs and benefits of the two strategies.

Gov. Scott Walker campaigned as an advocate of the first route, strongly supporting CAFOs. On his campaign website four years ago, he promised to speed up the permitting process:

I support improvements to Wisconsin’s “Right to Farm” law so that farmers can devote their time and energy to the crops and livestock that our families depend on. (These statements have since been removed from his website.)

These sentiments are very much in sync with the cost leadership strategy of economic development: drive down costs and get rid of government regulations. In the case of CAFOs, it also increases environmental costs and likely contributes to the trends of rural depopulation.

A differentiation strategy would concentrate on finding ways to offer a unique value to the customer, ideally something that’s hard for competitors to copy. In recent decades, for instance, Wisconsin moved away from being the leader in the quantity of cheese created and has become the leader in quality, creating award-winning, artisanal cheeses that are unique to this state. (Some of the gourmet restaurants in Milwaukee and Madison serve these cheeses.) Expanding organic farming would be another example of differentiation.

In her economic plan, Democratic gubernatorial candidate Mary Burke takes quite a different tack than Walker. She devotes several paragraphs to Wisconsin’s rural areas. Rather than concentrating on reducing costs and regulations, she emphasizes better serving markets and increasing the market value of farm products. These proposals include helping farmers meet the growing demand for organic foods and building food hubs connecting farmers to consumers. This approach would tend to increase the demand for labor in rural counties, counteracting rural depopulation. It is but one example of how the economic policies of Walker and Burke differ, something I’ll have more to say about in a future column.

9 thoughts on “Decline of the Dairy State”