Taste of Third Coast is Delicious

The Blue Jacket restaurant held their first annual Taste of the Third Coast event on Sunday from 12:00 pm to 4 pm, benefiting the Alliance for the Great Lakes, which works to protect and restore the Great Lakes. The event featured ten local restaurants offering samples of their food under large tents along with a pig roast, silent auction, and local environmental groups speaking at booths. There were also beer and spirit samples from the Great Lakes Distillery and Central Waters Brewing.

“Part of our mission is to celebrate the Great Lakes region and that’s why our food and spirits are sourced in Wisconsin and near the Great Lakes,” said Laura van Heijiningen.

Said Kerley: “These restaurants share our ideologies about using locally sourced food. I knew most of the people at the restaurants prior to asking them to attend.”

The event was held right outside of Blue Jacket, with the roads sectioned off near National and Barclay. DJs Brandon Brazil Reyes, Bumbac Joe, Kid Million and Fuzzy Logic played jazz, funk and Latin music during the festival as people browsed the tents.

“Not only does it go towards a good cause, but there are so many high end restaurants that take you from pork crepes to cannibal sandwiches,” laughed Marjorie.

The cannibal sandwiches came from Bavette La Boucherie in the Third Ward: this appetizer version was made of circular bread bites topped with raw beef, capers, cornichon, mustard, herbs, tarragon basil and chives.

“Many people would eat these back in the 1950’s during Christmas time. Even though the name’s not too appealing, these sandwiches represent Wisconsin,” laughed Bavette owner Karen Bell.

Right next to the Bavette table booth was Amilinda, a pop-up restaurant which serves every Saturday at the National Café. Amilinda offered samples of braised rabbit with tomato sauce, onions, and peppers topped over wild rice. The restaurant owner said wild rice and rabbit was the food of Native Americans in this region, and seemed appropriate for this event. He also said that Amilinda sources food from local farmers, and their rabbit dish usually has a Spanish- or Portuguese-based sauce.

Just outside of the tents, different non-profit organizations and environmental groups held tables with information about their mission. Todd Brennan, watershed project manager at Alliance for the Great Lakes, manned a table with education manager, Katie Larson and two volunteers. They informed people about their “beach ambassador initiative,” which gathers pledges from people to stop littering on beaches and recruits volunteers for advocacy.

“We want people to see they can improve the beach water in Milwaukee by not littering,” said Brennan. “Right now, Milwaukee Metropolitan Sewerage District is the most progressive plant in the country which works to reduce pollutants through green infrastructure.”

“I don’t think that Milwaukee would be the city it is today if it wasn’t for Lake Michigan. We wouldn’t have the jobs, tourism and the amazing sustainable food resources,” said van Heijiningen. “My husband and I think it’s important to gather these other restaurants which support the Alliance and hold this event every year.” So look for the second annual festival in June 2015. 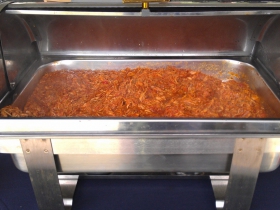 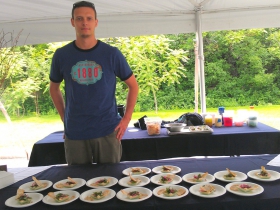 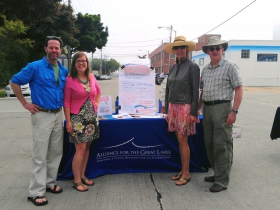 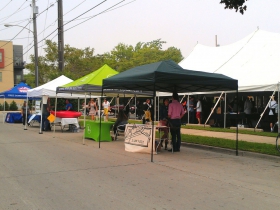 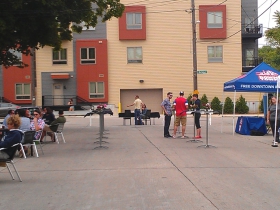 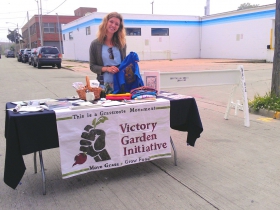 0 thoughts on “Dining: Taste of Third Coast is Delicious”