Kovac wonders why MSOE would name it after its current president. And why an engineering school couldn't dig a deep enough hole for its soccer field.

The Milwaukee School of Engineering has taken the unusual step of naming their new soccer field after current school president Dr. Hermann Viets. The signage for Viets Field requires a change to the zoning for the property, so the university had to come before the city’s Zoning, Neighborhoods & Development Committee Tuesday morning.

Pressed by Ald. Nik Kovac on the peculiarity of naming it after an active school official, those representing the university noted it was at the behest of the donors on the project, Robert and Patricia Kern and that if Viets had his way the field would be named after the Kerns.

Viets and the Kerns have had a long relationship that has profoundly changed the university. The Kerns gave the largest gift to build the new athletic and wellness facility that bears their name, the Kern Center. The facility, which opened in 2004, replaced a dingy basement athletic facility that had been used for years.

The Kerns also paid down the remaining debt on the Kern Center some eight years ago (which was a sight to behold: I was the MSOE student government Vice President at the time, sitting across the table from Robert Kern as he presented a personal check for millions to President Viets). Many people have told me stories about the Kerns’ generosity and how they wrote countless checks to various employees when they sold Generac, the company Robert founded. They’ve made a number of large donations to the university, and have given over $100 million to Mayo Clinic. They’ve been nothing but generous, so if they want to name the field after Viets, I guess they’re entitled to insist.

The truly humble thing for Viets to do at this point would be to honor the Kerns wishes, but to hold off doing so until he retires. Leave the signage off the field until he retires. Installing it can be the first act of the next president, who will be only the fifth in the university’s 110+ year history. Viets has been president of the university since 1991 and resides on-campus in the Humphrey House with his wife Pam.

Not The First Change

The signage isn’t the first change to the athletic field and parking complex. What was originally proposed was a soccer field that was level with the ground on the corner of N. Broadway and E. Knapp St. A field that was visible from at least a block south on Broadway.

The end result is a field that isn’t visible from any of the corners, at least without a Hummer, as Ald. Kovac pointed out. Kovac expressed his displeasure that “an engineering school couldn’t dig a deep enough hole.” Also chiming in with criticism was Ald. Willie Wade. My colleague Dave Reid has offered a negative take on the project since its initial proposal. It’s unfortunate that the funds weren’t forthcoming to finish the facility as originally proposed.

Browse the photo gallery of the project start to finish. 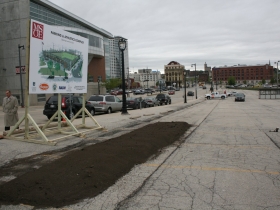 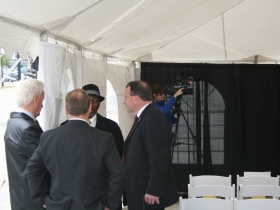 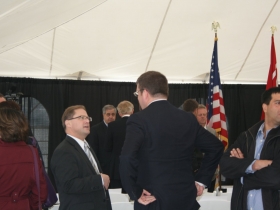 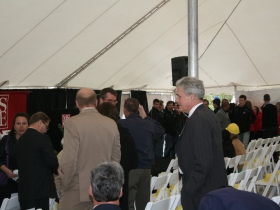 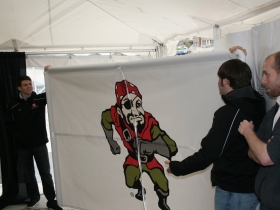 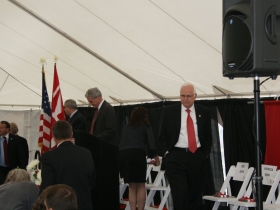 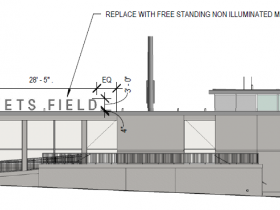 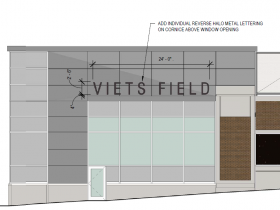 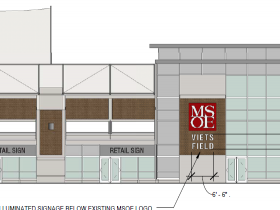