A New Park for the City

The city, Associated Bank and Newaukee cooperate on a new park being created at MLK Dr. and McKinley Ave. 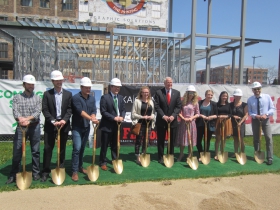 Yesterday, dozens came out on a warm, sunny spring afternoon to witness a groundbreaking ceremony for a new park at the corner of Martin Luther King Jr. Drive and McKinley Avenue in Milwaukee’s Haymarket neighborhood.

An ambitious project, it is the fruit of a rare cooperative venture between the City of Milwaukee and two of its corporate citizens, Associated Bank and Newaukee.  The park will be situated just south of Associated Bank’s new branch located at 1301 N. Dr. Martin Luther King Drive.

Due to a number of utilities running underneath the lot where the park will be created, the lot was vacant for some time. The development of the park was the brainchild of young professionals group, Newaukee, who appealed to the Department of Public Works to beautify the area with a park. Commissioner of the Department of Public Works, Ghassan Korban declared that he was thrilled to beautify the space saying of the lot, “as green as this space looks, it will only look greener when it’s done.”

Mayor Tom Barrett attended the groundbreaking and lavished praise on the project. “This is a win-win situation where we’ve got a great corporate citizen working closely with the city to improve the quality of life for the people here just north of Downtown,” he said. “Young people are attracted to the city. They want to be here and having this park here is just another example of what we’re trying to do to make this an attractive city for younger people.”

Succeeding Barrett at the podium, Associated Bank’s John Halechko talked about his company’s embrace of the city: “The development of Haymarket Square extends our commitment to Milwaukee. It is our hope that this action will boost development throughout the area.”

From a glance at an artist’s rendition, you can see that the park, when completed, will be more than just trees and benches. Decorative shrubs and rain gardens will add character and shuffle board courts and paved walkways will ensure use. Seasonal events such as athletic competitions will be organized by Newaukee, ensuring continued use of the park.

“This is just one of many public spaces we’re working on to make Milwaukee a better pedestrian-friendly city,” said Newaukee’s Jeremy Fojut. “Great public spaces, I believe, are the new anchor tenants of communities. We can use these spaces for economic development, increase value property, and they act as a magnet for better quality of life.”

And so, Barrett, Korban, Fojut, and Halchenko each donned the inevitable hardhat and grabbed a shovel before a mound of loose dirt. And the ground was broken on another new Milwaukee project. 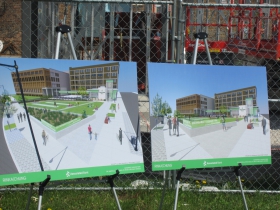 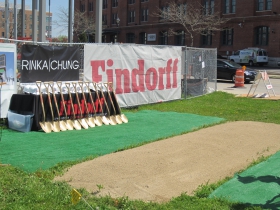 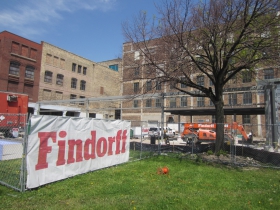 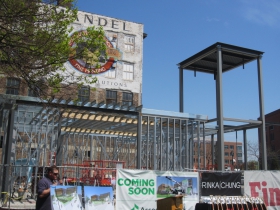 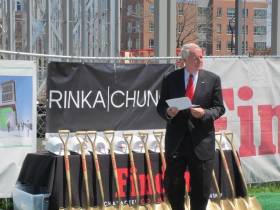 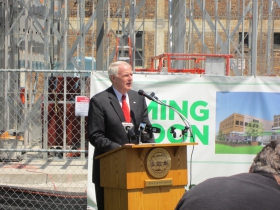