The Greening of Milwaukee 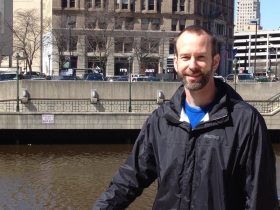 Matt Howard is Milwaukee’s Mr. Green. Since, June 2010, when he was appointed the city’s Environmental Sustainability Director, Howard has overseen a wide range of initiatives, installations, programs and partnerships that are transforming Milwaukee into a more sustainable city. And the more green Milwaukee becomes, the more taxpayers save. “For every energy dollar the city has spent,” Howard notes, “the community sees eight dollars in savings.”

A St. Louis native, Howard holds a B.A in international economic and cultural affairs from Valparaiso University as well as an M.A in international economic and trade policy from The George Washington University. So even though he is now in charge of environmental initiatives, Howard sees himself as an economist first. “My interest in sustainability does really stem from my background in economics.”

After graduate school, Howard began his career with the U.S Department of Agriculture for a year and a half, spending most of his time assembling foreign aid packages. Next he joined the U.S Department of Commerce where he would more or less be employed for the next 11 years, shuffling around to various government entities in D.C. This, he says, “is fairly common on Capitol Hill.”

Howard began this decade plus of bureaucratic musical chairs as an economist at the International Trade Administration for four and a half years before being sent to the U.S House Committee on Ways and Means to advise trade and economic issues. He then returned to the Department of Commerce, at which point his interest in sustainable manufacturing came into play. After a couple more changes of position in D.C, including a brief stint with the Patent and Trademark Office, Howard decided to make a career shift.

“I was looking for Sustainability Director positions and I was already familiar with some of the things happening in Milwaukee at places like Rockwell Automation and Johnson Controls.” The proximity of family in the Midwest helped seal Howard’s decision to come to Milwaukee when the job was offered. 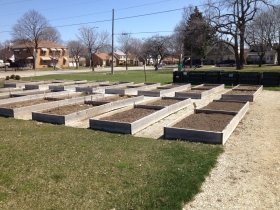 Howard has been very busy since assuming the position, handling a long list of projects. A key one is the city’s Green Corridor —  an area centralized on South 6th street between Howard Ave. and College Ave that is dedicated to experimenting with sustainable public works. “It is basically a sort of lab for collaborative green management,” Howard says. While the initial focus of the Green Corridor was storm water retention, it has since stretched into an ongoing discussion of all things green and sustainable.

Howard was also a central influence in installing the city’s first wind turbine at the Port of Milwaukee, completed in February 2012. The turbine, visible from I-794 in Bay View, powers the Port Administration building at 2323 Lincoln Memorial Drive. It is now the first net zero-energy city building: totally self-sustaining, relying only on the turbine-created energy. 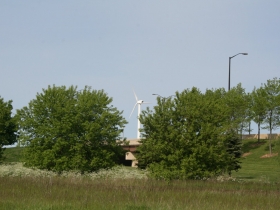 Then there’s the Me2 program, one of the landmark initiatives Howard has overseen. “The objective is to help residents afford the upfront cost of building and installing green additions and updates to their homes,” Howard says. Me2 focuses primarily on providing financing terms to facilitate installing anything from attic and wall insulation to heat pumps to solar panels, with flexible loan terms of up to 15 years through Summit Credit Union. And with no money down, no credit requirements and no equity, Howard feels the program terms are quite accessible, which is probably why Me2 has contributed to updating almost 1,300 homes since 2010. Me2 also focuses on businesses through PACE (Property Assessed Clean Energy) financing. Howard says that 139 businesses have taken advantage so far.

Which brings us to the next number up, the Me3 program, (the Milwaukee Economy, Energy, & Environment program), which helps small- to medium-sized manufacturers improve their energy efficiency. The idea is to help them identify where they could cut operating costs while also reducing their environmental impact. So far, 26 manufacturers have helped save themselves millions of dollars and divert almost 10,000 tons of waste from the landfill.

What Howard seems most excited about, however, is a program called ReFresh MKE. “If you really want to know what a big focus at my office is, this is really it,” he says. Introduced in July 2013, ReFresh MKE is a 10 year plan (Howard prefers “road map”) that sets goals and timeframes and provides a quantifiable vision for community sustainability across a wide variety of areas.

It all started in 2012 when Mayor Tom Barrett appointed Howard as the chair of what was called the “Green Team”. This was a 15-member team tasked with developing an overarching sustainability strategy, which spent 18 months working in tandem with roughly 1,500 residents and about 100 local businesses. “The plan was essentially created by the community,” Howard says. “The Green Team took the data from their input and distilled that to figure out what the common ideas and concerns were.” What came out the other end was ReFresh MKE, Milwaukee’s first, broad-based sustainability plan.

Since Howard became Sustainability Director, there has been about a $500,000 annual drop in the energy bill for the roughly 140 City of Milwaukee buildings. And there’s that 8:1 overall energy spending return for the city.

“The way I see it, sustainability has what you could call three pillars: there is the environmental, the social, and the economic.” And Howard believes the latter two pillars often get overlooked. Sustainability, he notes, is not at odds with economic development, but actually enhances it. “Sustainability should really be looked at as a competitive advantage for Milwaukee. It can only make the city more attractive.”

And that’s good news for the mayor. Barrett calls Howard “a trusted advisor and a key resource in defining the future of Milwaukee. He has demonstrated his ability to engage the business community and protect economic development while not losing sight of our obligations to the environment.”

Howard and the mayor both believe the greening of Milwaukee will have significant long-term benefits. Barrett’s prediction:  “The solutions we are putting into place now will last longer than my term in office and perhaps my lifetime.”

12 thoughts on “The Greening of Milwaukee”