How a small,1928 bungalow became a kind of tavern without a license, and a noisy nuisance to neighbors. 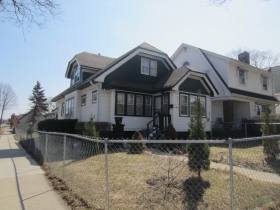 Daron Maye will have a day in court on Thursday, April 10th, when he is scheduled to appear before Judge Jeffrey A. Conen. Maye, 50, has had lots of days in court over the years, and sometimes he doesn’t show up, which always makes things worse. This time his visit is to Circuit Court, where the City of Milwaukee is demanding he cease illegal operations of his home in the 3300 block of N. 37th St. as an after-hours party house. Attorney Nick DiSiato is handling the case for the city. He’s not too crazy about this “blatant disregard of the law,” yet the peculiar circumstances of the party house being a private home obliges him to respect certain constitutional limits that would not apply to a commercial property. Man’s home is still his castle, and all that, you know.

Over the past four years police have paid 274 calls to the home issuing municipal citations for various infractions, according to a news item in Journal Sentinel.  Maye paid fines for disorderly conduct and resisting arrest for activities there. But it looks like the party house simply moved around the corner to the other unit, as Maye has been cited for nuisance violations at the other residence in the duplex according to Municipal Court records. He got off on a number of them, but paid fines for others like disorderly conduct, resisting arrest, and operating without a liquor license. That offense comes with a $3,224 fine. which Maye paid in 2010. Maye was found guilty of the same offense later that year, and given the identical fine, which remains unpaid, yet not in arrears. He has until May 29th 2014 to pay that one.

In Circuit Court, Maye owes $193 for a May 30, 2012 Disorderly Conduct charge. That one comes with a bench warrant, as Maye should know. He has received many of them, and has done time in the House of Corrections for contempt of court. That case came from defying a judge’s order to vacate and board up the home for a 60-day period. Police found him hiding in a closet.

Maye also has been sentenced at various times to a batterer’s intervention program, to parenting classes, AODA assessment, to maintain sobriety and to stay clear of firearms. He “may never possess firearms or ammunition,” ruled the judge in a Domestic Violence conviction. In August, 2012, two people were killed in the house just months after Maye was fined the extraordinary sum of $86,500 (still unpaid), and weeks after he regained use of the premises. His “blatant disregard for the law” has prompted the city to take extraordinary measures to maintain the quality of life in a challenged neighborhood.

This one was built in the Lawnhurst Subdivision. According to a 1923 advertisement, the serene acres of Lawnhurst lie “about 3 blocks north of Thirty-fifth and Burleigh streets.” Lawnhurst provided “a first class location for your future home,” the ad noted, and just “$50 DOWN secures for you one of these fine wide lots,” according to Messrs. Zinger + Braun, the developers. But it wasn’t until March 14th, 1928 that Matt Rausch took out a building permit for this $4,800 bungalow of 24 x 42 feet dimensions at what was then 1486 37th St.

While he was at City Hall, Rausch also took out a permit for a 10 ft by 20 ft garage. This is the earliest instance of a House Confidential home and garage being simultaneously constructed. By 1928 there were 21 million vehicles in the United States, and the alley garage was to become a commonplace on Milwaukee’s miles of bungalow-fringed streets like this one. It is not clear if the home was owner-occupied originally, and it appears that Rausch was a real estate investor, but as early as 1935 the home was occupied by Carl G. Jaeger, a clerk with the Chicago, Milwaukee, St. Paul & Pacific Raiload Company.

In 1938 Rausch, still the home’s owner, took out a Permit to Alter or Remodel Existing Building to “set partitions on 2nd floor for 1 additional family” at a cost of $1,100. He sold it in 1949 for $13,200, probably the relative high point for the home’s value. By 1956 the owner was Frank Tarasoff, and he put in a new $375 gas-fired hot-air furnace to keep the home warm. In 1959 Tarasoff acted as his own contractor when he relocated and rebuilt the garage, more than doubling it to 20 ft by 20 ft. By 1989 it was the residence of Maynard K. Fink [if you like that name, wait until the next one in this story] who sold it for $37,000 to Sukhjitpal Dhillon, who owned a gas station / convenience store two blocks to the east. Sukhjiptal and his wife Lydia transferred ownership of the home among themselves severally and individually a couple of times before it wound up in the hands of Wells Fargo Bank in spring 2003. By August 2003, it belonged to Daron and Jonether Maye and the neighborhood has not been the same since. They paid $37,000 for the property. The home reached a high assessment of $103,700 in 2006 before settling down to its current valuation of $59,900.

How Milwaukee Is It? The residence is 4 miles via Fond du Lac Ave. from City Hall. 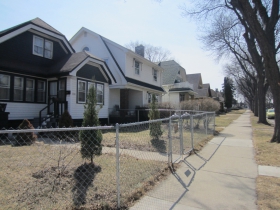 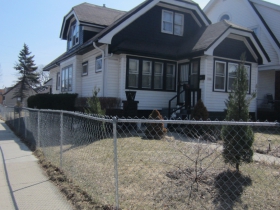 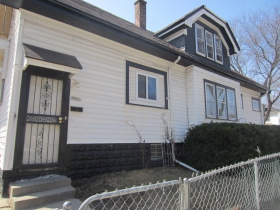 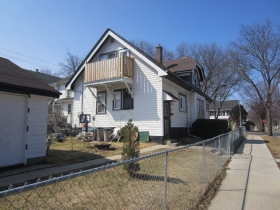 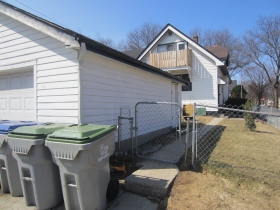