The downtown co-working space aims to build -- one entrepreneur at a time -- a new Milwaukee economy. 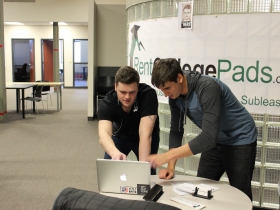 The idea for 96square, a downtown Milwaukee coworking space, was something that started off as a “beer meeting with friends,” recalls co-founder Matt Cordio. Cordio graduated from Marquette University with a degree in entrepreneurship and in his senior year there, he teamed up with Alicia Boknevitz, Tim Grove, Joe Poeschl, Nathan Hammons and Tom Giles to establish an organization that would ultimately run 96square.

“We were talking about challenges we face as entrepreneurs, being a tech company in Milwaukee,” recalls Cordio. They realized, he says, that no organization in town set to help entrepreneurs was “effectively serving” them.

And so the group formed “Startup Milwaukee,” a non-profit organization committed to fostering new growth in technology, and providing “valuable workshops, resources and programs to help entrepreneurs successfully launch and scale their companies,” as its website notes.

Although a non-profit, the primary focus of Startup Milwaukee is not to raise grants or satisfy donors, Cordio says. In fact, it’s really a part-time job on the side for people working to create their own startup companies. Cordio is also the founder and CEO of Skills Pipeline, a local marketplace for professional services. Poeschl is a co-founder and partner at Polymathic, and Giles is the founder and CEO of StageBloc. “We are day-to-day entrepreneurs, and we understand what entrepreneurs need, and I think that makes us unique,” says Cordio, who serves as the group’s chairman.

The organization has grown from five guys enjoying a beer to a network of about 1,300 people — with lots of ideas — in a short span of two years. One thing entrepreneurs need, members concluded, is a space to start out. And so, back in October, Startup Milwaukee founded 96square, a co-working space for startup companies with the potential for high growth, located at 1101 N. Market St. in the historic Blatz Wash House in downtown Milwaukee.

Though it’s run by the non-profit Startup Milwaukee, 96square itself operates as a for-profit organization. Costs are kept to a bare minimum. Cordio and company entered into a collaborative agreement with SSG properties that owns the building. The 11,000 square foot space is provided by the landlord at no cost along with the basic amenities for a functional office space. Starting at $110 per month, prospective renters get a dedicated table which they can customize, access to high speed Internet, whiteboards, and shared amenities like a kitchen and conference rooms that any renter can use.

“We take an entrepreneurial approach to this, and we limit the costs to do it,” said Cordio. “We don’t need super fancy furniture, but we have the bare essentials.”

The name of the office is derived from the total area of the city of Milwaukee, which is 96.12 square miles. Besides providing a space, 96square and Startup Milwaukee provide a structure to mentor startup businesses that have the potential to create large amounts of wealth.

“Howard Schultz, the CEO of Starbucks talks about having a third place between house and home,” says Cordio. “We aim to be that place.” 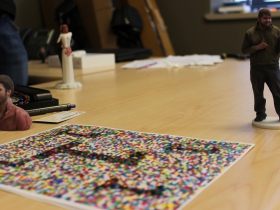 So far 16 companies have rented space at 96square; however not all of them are technology oriented. RentCollegePads focuses on connecting real estate with college students around the UW-Milwaukee and Marquette campuses while Voxel Metric is working on 3D printing.

The 96square space also boasts an investment firm. The Wisconsin Super Angel Fund is in its nascent stage as a venture capital fund.

According to Cordio, there are two main concerns of any startup businesses in Milwaukee: (1)finding the talent and (2)access to capital; and capital usually follows the talent. The problem in Milwaukee is that a large number of college graduates are seeking lucrative positions in the technology sphere outside Wisconsin. This has led to a brain drain of potential entrepreneurs.

As a result, the economies of Milwaukee and Wisconsin are missing out on the benefits of having young educated people who could be ready to invest in the city. “We need to attract those entrepreneurs who will be able to build stable companies with the intention of high-growth in Milwaukee,” Cordio says.

“Capital Connection Events” is another offering of Startup Milwaukee and 96square. Various managing directors, chief executives and founders of successful firms speak to the businesses that have rented space at 96 square. It’s a way to give entrepreneurs insight into what it takes to become a success, notes Cordio.

For instance, a representative of Techstar Chicago, which boasts of having the number one accelerator program in the country, came to speak to the group. “These events have been well attended and successful. Some have averaged around 80 people,” says Cordio.

Startup Milwaukee’s structure draws inspiration from a successful non-profit in Chicago called 1871. The basic model is the same, but the challenge is greater in Milwaukee, given its more limited resources and a depleting pool of young talent. But a growing network of 70 companies in the Milwaukee technical space are involved with the growth of 96square. That includes CSA Partners LLC, owned by Milwaukee County Executive Chris Abele.

Though Wisconsin ranks second to Indiana in the percent of workers involved in manufacturing, Cordio believes the key to economic success is in technology rather than the old manufacturing model that city officials are trying to boost. The latter, he says, is not a realistic way to sustainably grow the economy.

“We need incentives for entrepreneurs to relocate and start their companies here,” says Cordio. “Research shows that if you start a company in a certain location then you are most likely to stay in the same location as the company grows.” 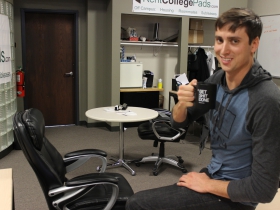 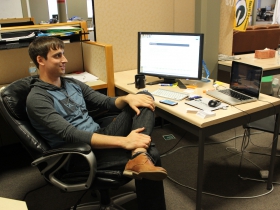 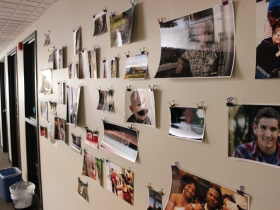 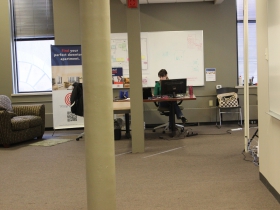