In Milwaukee and nationally, universities are cutting costs on parking structures by promoting buses, bikes and car-sharing. 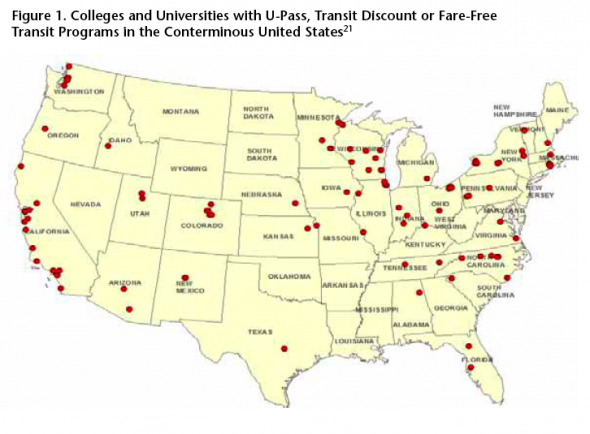 American colleges and universities are leaders in reducing driving and promoting sustainable transportation. It allows colleges to make good on their commitments to protecting the environment. It makes life easier for students and staff. And, perhaps most critically, it’s saving schools big money on parking. Stanford University estimates its efforts to reduce solo car commuting have saved the school from sinking $100 million into the construction and maintenance of parking facilities.

Here are some of the smart ways universities have been able to reduce solo car travel, according to a new report by the U.S. Public Interest Research Group. PIRG is recommending cities hurry up and follow their lead.

Among the most common and effective strategies colleges employ to reduce driving to campus is providing free or reduced transit fares. PIRG reports 104 universities around the country offer this perk, often called “U-Pass,” to students and/or staff. Universities typically fund the program with fees collected from students or with revenue from parking permit sales.

After the University of Missouri at Kansas City adopted a U-Pass program in 2011, transit use by students climbed 9 percent. Now other universities in the Kansas City region are looking to replicate that success, PIRG reports.

Chapel Hill took it one step further and made transit free for everyone. As a result, transit use by students more than doubled between 1997 and 2011, from 21 to 53 percent.

U-Pass programs don’t just help universities reduce spending on parking. They have spillover effects that also help promote transit beyond campus boundaries, by providing a steady source of revenue to transit operators and getting young people in the habit of taking the bus.

Car-share services have also become an indispensable amenity for students and staff at universities across the country. Zipcar operates on 300 U.S. college campuses. Enterprise has a campus-based car-share service as well, which operates at 82 schools nationwide. At MIT, an early leader in campus car-share, 5,500 students and 300 staff members have Zipcar memberships.

ZipCar first launched in Milwaukee on UW-Milwaukee’s campus in 2007. UW-Milwaukee now has nine vehicles located on campus sites including Sandburg, RiverView, and Kenilworth Square and offers discounted memberships for university housing residents. Marquette University added ZipCar to campus at the end of 2010. In May of 2013 ZipCar began expanding service throughout the city, following the lead of these universities.

Ride-share services are another important tool. PIRG reports that about 130 colleges and universities around the country use the ride-share platform Zimride to match students for carpooling. One of those schools, Cornell, found that during a six-month period the service had facilitated 4,000 one-time rides, taking an estimated 2,000 cars off the road.

In September of 2012 UWM joined ZimRide, an online ride-sharing social network. According to UWM’s website, 2,700 UWM students, faculty, and staff members are sharing rides through the service. 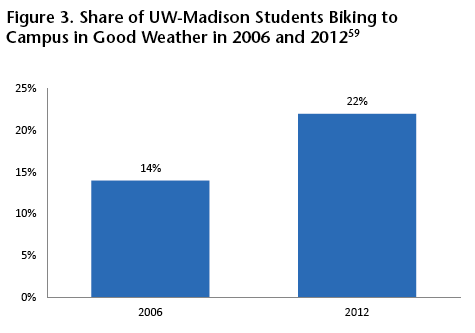 University of Wisconsin-Madison has been a leader in promoting bicycle commuting. Image: U.S. PIRG

From providing free bike maintenance, to providing free bikes altogether, colleges are getting creative about promoting cycling. The UW-Madison is a leader in this respect. In good weather, nearly a quarter of students bike to campus — an increase of more than 50 percent since 2006.

The university has employed a range of strategies to get students and faculty pedaling. The school offers ample bike parking while restricting car parking. It provides students with a Bicycle Resource Center, with tools for repairs and free maps. UW-Madison students also get discounted memberships to B-cycle.

UW-Milwaukee offers a variety of resources for bicyclists, including bicycle lockers and racks, air filling stations, a fix-it station, and shower facilities. (Meanwhile, running contrary to those efforts, the UW-Milwaukee Student Association voted to subsidize 700 free parking spots for commuters at the expense of all students, including those choosing to bike, walk, or take transit.) Bike-sharing is expected to rollout in Milwaukee during 2014, though it is unknown if any of the local universities will participate in the program.

The University of Colorado-Boulder is another school that’s helping itself by helping people bike. The university has played a key role in Boulder in helping fund bike infrastructure, covering some construction costs for dozens of pedestrian and bicycle underpasses that allow people to avoid mixing with traffic on busy thoroughfares. In 2012, about 60 percent of trips made by CU-Boulder students were by bike or foot, up from 51 percent in 1990.

For those who must drive, colleges are pulling out all the stops to encourage carpool trips. The University of California-Davis offers a range of incentives to carpoolers under a program called goClub. People who car commute together get a 60 percent discount on parking passes. Carpoolers also get special reserved spaces at premium locations and a complimentary ride home in emergency situations. Carpoolers are also entered in a drawing for prizes, like restaurant gift certificates.

These incentives work. The university reports that in four years, carpooling rates increased between 25 percent among non-academic staff and 30 percent among professors.

Like telecommuting, online education help reduce trips to campus. And even online databases like JSTOR can help reduce trips to the library, PIRG reports. It’s been a long time coming, but some colleges are beginning to recognize the value of online education as a strategy for reducing car commuting. Madison Area Technical College uses video conferencing to connect professors to many campuses, reducing the need to commute to a central campus. In 2010, the school estimated that it helped 3,240 students avoid commuting to campus weekly.