Plus: problems for the Bucks' Larry Sanders and redevelopment at Reed Street Yards.

Add another name to the list of candidates considering a run for the open assembly seat to be vacated by Rep. Jon Richards, who has announced his candidacy for Attorney General.

I’ve been asked by some community members if Id be willing to step up and while flattering, it’s a very personal decision and, having worked on so many campaigns, I understand how much of a toll it can take on a young family. I’m strongly considering it, but I haven’t made a final decision yet. 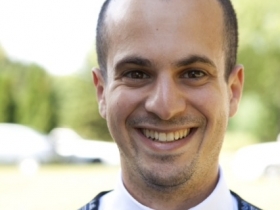 Brostoff joins a list of announced and unannounced candidates for the seat. They include Sara Geenen, who declared her candidacy last week, Dan Morgan Adams, Jason Rae and County Board Chair Marina Dimitrijevic.

Brostoff was featured in this week’s City People article by Tracey Pollock.

Bucks player Larry Sanders is in the news and out of the game due to an injury sustained in a bar fight at Apartment 720, a nightclub / disco located at that address on N. Milwaukee Street. It has also been reported that Sanders was issued two citations at the beginning of this year from the Milwaukee Police Department after a neighbor complained that Sanders kept two of his dogs out-of-doors in frigid conditions. Each ticket for “Cruelty to Animals Lack Proper Shelter” carried a $125 forfeiture, which Sanders paid.

Sanders still appears to live in the mansion, just down the street from House Confidential honoree and County Executive Chris Abele, but may have added another home to the mix.  Sanders has been filling cyberspace with photos taken from The Moderne, which is substantially a dorm for Bucks players. Sanders will celebrate his birthday next week, perhaps by not abusing dogs or fellow tavern goers. He was born November 21st, 1988. 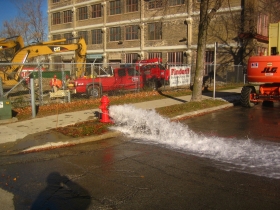 Construction of a new parking deck has started at 408 W. Florida St. Photo by Michael Horne.

A fire hydrant gushes as crews from J. H. Findorff and Son, Inc. do groundwork at the future Florida Lofts, 408 W. Florida St. The three classic warehouses on the site have 189,327 square feet of space that are to be converted to multifamily housing. The property, part of the newly created Tax Incremental District 75, is immediately to the east of the Iron Horse Hotel. The area in general is being significantly redeveloped, partly due to the arrival of the Global Water Center at 247 W. Freshwater Way, where workers can be seen excavating part of the Reed Street Yards, a 17-acre former railroad and port facility in Walker’s Point that was once liberally covered with coal to power Milwaukee’s industry. Freshwater Way will run southwest diagonally through the yards, and will connect with the P&V Atlas property and lead to the construction of an estimated 1 million square feet of office and industrial space in what is planned as an “international water cluster.” 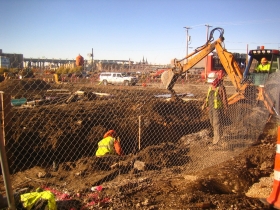 The road will also open up to residential and other development a number of historic tannery buildings that were isolated from the street grid by the railroad tracks that still run alongside its southern border. It appears that eventually some north-south street connections must be made beneath the railroad tracks to better integrate this area with the surrounding neighborhood. The city might face a similar prospect to the east, where north-south elevated rail beds inhibit east-west traffic patterns between E. Florida Street and E. National Avenue.

Michael Glorioso of the Italian grocery family says his buyer will spend a couple of weeks in Italy, thanks to an all-expenses-paid trip sponsored by the Italian Consulate. He hopes to make connections with producers in that country that would enable him to buy bulk products for private labelling, thereby cutting out the middleman. What about the warehouse at 531 E. Corcoran Ave. in the Third Ward? Glorioso says the company isn’t using the space any more — except to store some of his personal junk. Expect to see the property on the market eventually.

2 thoughts on “Plenty of Horne: Larson Aide May Run for Richards Seat”