For Democratic activist Jonathan Brostoff, his work in politics led directly to love.

While attending UW-Milwaukee, Brostoff was organizing for the College Democrats, making phone calls to bring new members to an event. He called a woman named Diana and had “a great conversation,” he recalls. “I was intrigued and noted her name, asked her out a few times and she eventually agreed. Ever since the first date we have been inseparable.”  Last year, in fact, they got married. 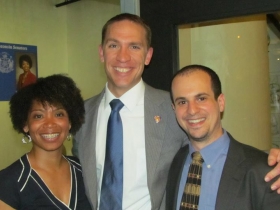 Brostoff serves as district office manager for state Sen. Chris Larson, is passionate about politics, and is part of a new breed of young Milwaukee Democrats trying to rebuild the party.

Born and raised on the East side, Jonathan grew up in a progressive household committed to social service and “fighting for the little guy.” His mother was a social worker and his father a labor attorney. “I was raised in a very positive but very politically aware family,” he says. “My family has always been very active in social work and politics—I was raised with that ethos.”

He began volunteering at the youth shelter Pathfinders—on Kane Place— at age 14, moving onto a paid position as a peer advocate and staying until he was 18. He then served as an Americorps volunteer where he worked with both youth and parents served by SDC Family Support Center. He also volunteered with the Casa Maria Hospitality House and with Dry Hooch, an alcohol-free cafe with programming for veterans located on Brady Street.

“I really got a taste of the different social work environments in Milwaukee,” Brostoff explains. “Each shelter is run very differently and each has its own philosophy. You get to see the best practices serving the different populations. It helped develop my philosophy of social service work.”

But ultimately it steered him toward a political science degree when he entered UWM. “There are a lot of policies that impacted shelters and I wanted to get involved at the state, national and local level to understand why these decisions were made,” Brostoff says. “I felt like some of the decisions were being made by people who didn’t have social service experience or working with that type of clientele.”

Beyond the poli-sci degree, Jonathan received a certificate in Child Care Youth Work while at UWM. He also served as chair of the College Democrats, where he met and became a friend of Larson.  He also interned at City Hall, at the United Nations in New York City and for Senator Tom Harkin of Iowa.

“My favorite experience in the College Dems was bringing Howard Dean to UWM; he only traveled to three campuses a year and we got him to come to UWM.” That was in 2007 when Dean was national chair of the Democratic Party.  “It was huge. We packed that place. I think the community really appreciated it.”

During college, Brostoff became a legislative assistant to Larson, who had been elected County Supervisor. After Larson was elected to the State Senate in 2010, Brostoff continued as assistant for Larson’s successor, Sup. Jason Haas, until this past April, when he returned to work for Larson, opening his district office in the Third Ward.

His best experience at the county, Brostoff says, was the successful effort to pass legislation providing domestic partner benefits. “Larson took charge on that,” Brostoff says.  “It’s a really important issue to me because my brother (who is gay) has had a lot of crazy, horrible experiences. Which is a terrible thing to think about.”

In his free time, Jonathan helped start the group, Dem Team.  “We wanted to give bold progressive folks who may never have even thought about running for office the tools to run. The purpose was to get more progressives specifically from Milwaukee County.” The program is now in its fifth year and among the successful candidates recruited are Mandela Barnes, Dr. Tatiana Joseph, Daniel Riemer and Nikiya Harris. “You know a lot of people say work smarter, not harder. But I like to say that we need to work smarter and harder.”

Brostoff enjoys his work at Larson’s district office. “That open access to government where anyone can come in is something I love. It’s the essence of government, it needs to be open.”

“In politics you have all these promises with campaigning and people are really turned off by that,” he adds. “People want the opposite of that, just be honest and real. Keeping it real will draw so many more people in.”

He and his wife Diana have just celebrated their sixth year as a couple and their first anniversary of marriage. Diana is currently completing a masters of social work degree at UW-Milwaukee. The couple lives in the Brady Street neighborhood, and, says Brostoff, “I love it.”