Don’t Take Away Our School Buildings 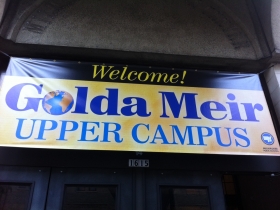 According to the new school report cards the state issued last month, my son’s elementary/middle school “exceeds state expectations.” I’m not surprised. He goes to Golda Meir, one of the best schools in the state for decades. Even before there were school report cards, there was a National Blue Ribbon, high test scores, packed classrooms and forensics trophies within Golda Meir School’s crowded quarters.

But what happened this week did surprise me. Instead of sending Golda Meir’s students a “congratulatory” note on their success, Senate Republicans are serving up an eviction notice to the school’s Upper Campus – also known as Senate Bill 318.

You see, just one year ago, Golda Meir’s middle school moved from its bursting-at-the-seams building on 4th & Court to the vacant MECC building a block east. This move gave the school’s 3rd through 5th graders the space they needed, while allowing the middle school room to grow into its new Upper Campus.

Parents like me cheered when MPS approved plans to add a high school program to Golda beginning in 2014. This growth is great for our school community, not least because it’s ended the wrenching process of selecting those kids who would remain at Golda for middle school and saying goodbye to those who, literally, couldn’t fit in the building any longer. There is room to keep all of Golda Meir’s graduating elementary school students.

But Senate Bill 318, introduced by five Republican senators, Alberta Darling, Paul Farrow, Leah Vukmir, Mary Lazich and Glenn Grothman, disregards our progress. Because the Golda expansion plan is only in its second year, we are just growing into the Upper Campus digs. These senators would allow the state to force school buildings that are less than 40 percent occupied to be put up for sale at bargain basement prices. Soon. Even if they house growing programs. Even if the district has realized its first – albeit very modest – enrollment increase in ten years.

Great job on your new school report card, kids! Now would you mind taking a break from your standardized tests so that some publicly-funded parochial school administrators can do a walk-through?

The same fate – eviction – could face hard-working staff and students at Carmen High School of Science and Technology’s new Northwest Campus. Students enrolled in a charter school housed in the old North Division High are at risk of being uprooted. The bill is retroactive, meaning that it’s not just lightly populated school buildings the district must sell for bottom-dollar prices to competing school operators—it also targets school buildings with expansion plans and city partnerships already in planning stages.

It’s hard for me to tell my kid that he should memorize Spanish verbs and focus on advanced algebra when we know a few legislators owned by special interests plan to turn him out of his award-winning school environment. Even if his school were struggling, getting an eviction notice – or even the threat of eviction – is bad for any kid, anywhere, trying to learn.

It’s bad news for Milwaukee taxpayers, too, and it could spread statewide as Wisconsin Republicans continue stripping local control from rural and urban school boards. Remember when school vouchers were a Milwaukee-only deal? Then they expanded to Racine, right? Today vouchers are in school districts statewide.

Tonight I’ll pack my kid’s lunch – brain food, healthy stuff. I hope he eats it. Tomorrow, I’m asking folks across Wisconsin to write their legislators and demand we preserve local control, and let local school districts manage their own business.

If this out-of-control Legislature can go after one of the most successful elementary programs in Wisconsin, it’s a good guess they could be escorting real estate agencies around your public buildings next.

9 thoughts on “Op-Ed: Don’t Take Away Our School Buildings”