The Milwaukee County Courthouse was closed for two days after an electrical fire on July 6th. But signs of hazardous conditions in the downtown complex should have been evident as early as June 21st.

On that day, Court Commissioner Barry Slagle, who was presiding at his desk in the criminal intake court in the criminal justice facility, received a tremendous electrical shock when he reached forward to adjust his microphone.

In 2007 Slagle highlighted the poor conditions of the courthouse when he showed a reporter “four intact but thoroughly deceased roaches, ranging from about 2 to a robust 4 inches long. Two of the four even have name tags on their bags, courtesy of Slagle: ‘Grossman’ (that’s for then-Chicago Bears quarterback Rex Grossman) and ‘Junior,’ the smallest of the lot.”

Grossman was found by an inmate in a holding cell, and was used by then-Chief Judge Kitty Brennan to chide then-County Executive Scott Walker to do something about the conditions in the courthouse. She suggested that the future governor put a GPS device on wandering roaches to see where they were coming from.

Personal note: Although I have not seen him in years (I am not a habituee of criminal court) I have known Slagle since his days as an attorney, and always found him to be a witty, engaging individual. This is a terrible shame.

Kimberly Leach Johnson is “the first female elected chair in Quarles’ 120 year history,” according to a press release from Quarles & Brady LLP, the Milwaukee-based law firm with 445 lawyers in 8 offices.

She will also  be the first chair of Quarles & Brady to not have a license to practice law in the state of Wisconsin. Her practice in “Trusts & Estates Planning for High Net Worth Individuals and Families and Post-Mortem Administration Matters,” which she conducts out of the firm’s Florida offices in Naples and Tampa, will continue, the firm announced.

Yep, she will be running Milwaukee’s second-largest law firm out of offices in Florida.

“Kimberly Leach Johnson will not be based in Milwaukee, she will be based in Naples, Florida where she has a large Trust & Estates practice. Like [House Confidential Honoree] John W. Daniels Jr. before her, Kimberly will be a “mobile” chairperson, spending plenty of time in each of our offices, meeting with both partners and clients. She will maintain an office in all locations and spend significant time in each of them.”

Well, then, Ms. Kimberly Leach Johnson — No House Confidential for you!

Is Burke Decision Near?

Potential gubernatorial candidate Mary Burke is taking heat from some Democrats concerned that the millionaire is being forced upon them by party bosses. This strategy of pre-primary anointment worked when Herb Kohl picked  Tammy Baldwin to succeed him in the United States Senate, but Baldwin already had years of experience in Congress.

Burke’s only elected office is as a member of the Madison Metropolitan School District Board of Directors, where she is the clerk. She was elected to the school board in April 2012, after spending $120,000 to win the seat. That’s about half of what she paid in July 2011 for the 1,465 square foot home she claims as her residence.

We asked Mary Burke for some comments for Urban Milwaukee readers via a Facebook message, and were directed to Joe Zepecki, who serves as her spokesperson after having served in a similar capacity for the 2012 Obama presidential campaign.

But it looks like the handlers are not quite ready to take the wraps off their candidate and show her off to the world. Here is his response:

“Thanks Michael, completely agree that it’s important for your readers to begin getting a sense of who the candidates may be and what their take on Milwaukee is.  We’re in a little bit of a tricky situation at the moment however, given that she has not made a final decision on whether or not to run – and we want to be uber mindful of Wisconsin election law.  I will keep your contact info handy and at the appropriate time will be reaching out to try and see what we can make work.” 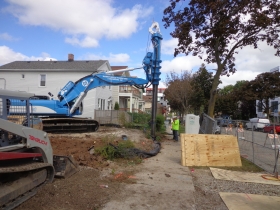 Work has finally begun on  Sage on Jackson, a long-dormant construction project at 1509-13 N. Jackson Street, in an area where things have been really hopping lately. The 7,200- square-foot lot is assessed by the city at $53,000 and was purchased in August 2012 for $33,700 by 1509 N. Jackson LLC. A dumpy shack on the property, valued at $145,200 was torn down in 2007, and the lot has been vacant since then with little activity save for the drilling of a number of geothermal wells on the property.

But a permit was issued September 11th, 2013, for the construction of a 5-story 20-unit apartment building on the site that Dave Reid reported at Urban Milwaukee last year was to be the “greenest ever built” in Milwaukee.

The property is being developed by Dominion Properties, a Shorewood outfit run by Michael O’Connor and Christopher Adams that has invested in a number of mostly older east side multifamily buildings.

Green features are to include a green roof, hanging gardens, factory-built modular construction, and a rainwater capture system designed to retain nearly 10,000 gallons of stormwater per rainfall. Also, the building will have electric charging stations at each of its 30 underground parking spaces. (Oh, for the day when we can build housing here without mandatory parking spaces.) Follow Urban Milwaukee for updates on this and other exciting projects in our city. … Rep. Jon Richards celebrated his 50th birthday a few days late on Monday, September 16th 2013 at the Hotel Foster. Tap beer flowed for free, served in the ridiculous jars that pass for pint glasses there. Richards was joined by his wife, Andrea Rowe Richards, who resigned from her City Hall job to raise the couple’s son Alex, who seemed to enjoy tearing around the spacious two-level tavern.

Rep. Richards was joined by Atty. Mark Thomsen, who lives just steps away, in a lovely home that shows early signs of being dominated by grandchildren. Also in the crowd was fellow Rep. Evan Goyke, and Sen. Lena Taylor. Fellow wine-drinker Jason Rae got some ear time with the assemblyman, while Stephanie Bloomingdale brought some AFL-CIO clout to the event, along with her two sons, who handle these boring adult events with great aplomb. Mayor Tom Barrett paid an early and brief visit to the event, which accounted for getting the speeches out of the way up-front. Shall we now strive to eliminate them altogether? 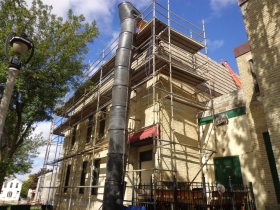 There is a scaffolding surrounding one of the three buildings that comprise Points East, a tavern-bar at 1501 N. Jackson St., just a door away from Sage on Jackson. Owner Mark Rasmussen says his crews have been putting new roofs on the buildings. The westernmost one, which fronts on E. Lyon St. was a particular challenge, he says. It has a mansard-style roof of concrete tiles. And they are deteriorating, he says. “Each tile weighs 20 pounds,” Rasmussen says. “And there are about 1900-2000 of them. That’s 20 tons of weight for the building to support, and it was showing the strain.” The replacement tiles will be of a much-lighter composite material, he said. A similar fix was undergone at the headquarters of Northwestern Mutual Insurance where composite panels replaced a failing granite parapet wall a couple of years ago.

MKE Steps Up to the [Fashion] Plate 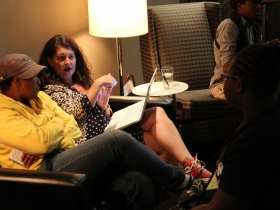 Wren Solares and a model plan for the big week ahead. Photo by Brad Blavat

All right Milwaukee, let’s drop the “come-as-you-are” look and dress up for just one week. Is that too much to ask?

The organizers of Fashion Week MKE Initiative hope their inaugural event, scheduled to run from Sunday, September 22nd to Saturday, September 28th, will promote “Milwaukee’s talent in the beauty and fashion industries” and stimulate economic development while “encouraging partnerships to create community involvement in sustaining a local fashion economy.”

This year’s event was “created as an initial teaser, and the aim is to build this event as an annual part of the Milwaukee calendar,” according to founder Wren Solares, who spent over a decade running events in London.

Now it’s Milwaukee’s turn, with a considerable number of free and paid events happening at SPiN Milwaukee, 233 E. Chicago St., itself located in the former home of Reliable Knitting Works, a remnant of Milwaukee’s long (and mostly forgotten) fashion industry. 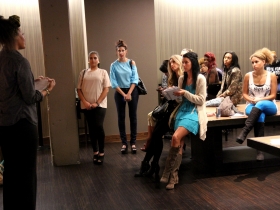 It’s time for the models to learn the ropes for Fashion Week MKE Initiative. Photo by by Brad Blavat.

Why even somebody as prominent as Jacqueline Kennedy insisted on dressing her children in Milwaukee-made fashions from Florence Eiseman, as were the children of such fashion queens as Princess Grace of Monaco and Elizabeth Taylor. So if you think that Kohl’s is the be-all and end-all of Milwaukee Haute Couture (and shame on you for that) you’ve got another guess coming.

Fashion Week got an early start Tuesday, September 17th, with a media event at SPiN. Models who will participate in the week got tips from event coordinators, while Solares talked about her plans. 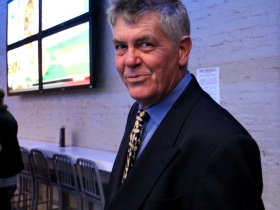 “This is an inclusive event,” she says. “This is for the community.” She hopes to raise money for local charities My Home, Your Home, Inc., which assists abused and neglected children in the foster-care system, Milwaukee Pets Alive, and the Elmbrook Humane Society.

The “Global Causes” include Fashion Hope, “to rescue and rehabilitate survivors of human trafficking,” and The Abolish Slavery Coalition, “to end the plight of millions of people who are currently enslaved by human traffickers.”

These causes will be introduced to attendees at a dizzying array of events, including a noon fashion show on Sunday, September 22nd, with former Channel 4 newsies Melissa McCrady and Heather Shannon as celebrity models. A 6 pm show that day will feature guests Miranda Levy and Timothy Westbrook, two local designers with a national reputation. Other events include workshops, photo ops, and a “Celebrating Men in Milwaukee” event at the Brewhouse Inn & Suites featuring the pairing of Milwaukee Ballet dancer Davit Hovhannisyan and the much-decorated Milwaukee Bucks player Larry Sanders. Sanders will also wrap up the Friday, September 27th festivities with a Tee Shirt Fashion Show.

While the Fashion Week MKE Initiative event was going on, Milwaukee landlord Royal Taxman and family celebrated his birthday with games of table tennis.

Taxman has been playing the sport for over 60 years, and has received many championships over the years, including some seniors titles. He was a semi-finalist in the Over 40 category at the Badger Open in 2012. This year’s event will be held this weekend, September 21st and 22nd 2013 at Center Court Sports Complex in Waukesha.
Categories: Plenty of Horne, Real Estate

3 thoughts on “Plenty of Horne: Shocking Conditions at the Courthouse”