The black attorney and power broker lives in a sprawling ranch house on a street of millionaires.

John W. Daniels, Jr. is the Chairman of the Quarles & Brady LLP law firm; this distinction alone would rank him among the most important African American attorneys in the nation. But there is much more than Q&B to JWD. 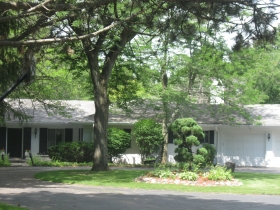 His home is a sprawling ranch residence in the City of Mequon on Range Line Road, which is just a fancy way of saying 27th Street. The home is in the 10000 block, one of the lower 5-digit addresses on that street; still, nothing says suburbia like 5 digits in your street address.

Range Line Road was one of the first patches of the giant city of Mequon to be civilized, or at least paved. St. James Catholic Church [now Lumen Christi parish] was built at the head of the street on Mequon Road in 1845. Across the street from it, the Range Line Inn began serving food in 1840, when its location was a regular stop on the wagon trail routes of the era. During this era, Brookfield had yet to emerge from the primordial ooze, yet here in Mequon a complex society was already being built.

As the years went on, Range Line Road assumed a sort of eclat, when Brookfield had no further aspirations than to serve as pastureland, a path from which it has sadly deviated to its great detriment.

The arrival of Milwaukee Country Club just down the street in River Hills in 1913 and the availability of the automobile for people of means signalled the dawn of the “Rural Suburb,” with homes lost from street view down winding country lanes. Here — on this very Range Line Road, names like Uihlein, Stratton, Evinrude, Wright and Weyenberg dotted the mailboxes. Very often these were very large mailboxes, all the better to be stuffed with annual reports, proxy notices and trust company statements. Range Line Road was favored not only for its proximity to The Country Club, but because nature had placed it on a ridge with tolerable views and a valley to the west that drained into the Milwaukee River.

Over time these country estates got pared down in size. Lots were carved out of the holdings of some estates, while others gave way to entire neighborhoods on hidden culs-de-sac and dead-end lanes with names like “Hidden Lake,” just south of the Daniels property.

The Daniels residence was built in 1961 on a 2.221 acre lot. The single floor brick ranch home has 5 bedrooms and 5 full baths, along with a half-bath somewhere within its 4,270-square-foot expanse. There is a 2104-square-foot basement and an 890-square-foot rec room. The property also has a built-in garage, and an asphalt-surfaced tennis court. It has been appropriately landscaped after the fashion of the neighborhood, which is to obscure any view of any dwelling from the outside world by any plant that might do the trick. Hence, buckthorn and honeysuckle seem favored.

John W. Daniels, Jr. joined Quarles & Brady LLP in 1974 as its first minority employee and has been the 450-person law firm’s chairman since 2007. The North Central College alum got his BA in 1969, and was chosen as an “Outstanding Alumni” in 1994. Next up, academically, for Daniels was an M.S. Degree from the University of Wisconsin in 1972 where he studied academic policy. While at UW he met some Harvard students, and pursued his further education at this august Ivy League institution, graduating with a J.D. from Harvard in 1974.

After joining Quarles, Daniels focused on real estate, and was instrumental in helping develop the Grand Avenue Mall, the Convention Center and the Bradley Center.

Sister Valerie Daniels-Carter runs V&J Foods, one of the nation’s largest minority-owned fast-food businesses, which operates countless Burger King and Pizza Hut restaurants, and her brother John, in addition to serving on its board of directors, also fronted her the cash to get started in business.

Another sister, Hattie Daniels-Rush, was described by the Milwaukee Journal Sentinel as an entrepreneur and business consultant. All four siblings, along with three other brothers, grew up in the city and attended Custer High School.

The family has considerable political clout. In 2004, Hattie and brother Sedgwick were delegates to the Republican National Convention and supported George W. Bush while their brother John supported Democrat John Kerry.

Fun Fact: There is a street named after Kathryn Daniels, the mother of John W. Daniels, Jr., in the City of Milwaukee. It is known as “Mother Daniels Way” and runs for a couple of blocks of what would be N. 35th St. west of W. Hampton Ave. Bishop Sedgwick Daniels’ Holy Redeemer Church is located on the street. 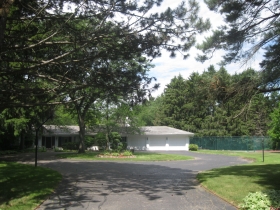