The Milwaukee School of Engineering enhanced its 110 year commitment to downtown Friday, August 23rd 2013 with the dedication of its Athletic Field and Parking Complex. The $30 million structure occupies the entire block bounded by N. Broadway to the east and the new N. Market street extension to the west. Its southern border is E. Knapp St., and its northern is N. Water St.

The facility includes a 210” x 345’ NCAA Division III competition field for soccer, lacrosse and rugby along with seating for 600 spectators. It is covered in a synthetic turf, eliminating need for irrigation. It is crowned by an ungainly nest of light towers, but they are LED, using 25% of electricity consumed by equivalent metal halide fixtures.

The building incorporates some green features like 225 tons (of a total 300 tons) of recycled steel.

There is an unfinished .88 acre public park on the north end of the building, along with 12,000 square feet of commercial space tucked into the three-level parking garage.

The dedication ceremony, appropriately, was held on the field, with men’s and women’s soccer teams providing a decorative element, their red and white uniforms contrasting boldly with the sober suits of the folks up on the dais.

They included Frank Habib, MSOE Vice President of Development, who emceed the event. Among those making remarks was Dr. Robert Kern, the retired chairman of Generac Power Systems and MSOE Regent of most splendid generosity. The Kern Center loomed across the street from the field as he spoke.

Kern said he thought the unnamed field should be named after Dr. Hermann Viets, the MSOE president who has transformed the institution over the decades. Viets modestly had nothing to say about that, but said the new facility should encourage others to move to the Park East corridor. That made Mayor Tom Barrett’s day. Barrett told the capacity crowd that “I have never seen the level of enthusiasm and engagement by young people as we see today.” He gave thanks to MSOE “and the young people it draws to downtown.”

His comments were echoed by Department of City Development Commissioner Rocky Marcoux, who has worked hard to bring development to the area.

After the event a reception was held at the Kern Center. Bob Kern and his wife Patricia Kern sat at a table in the arena enjoying an excellent meal catered by MSOE including various cheeses, fresh fruits and a selection of mini sandwiches. Complimentary wine and beer flowed, poured by uniformed wait staff.

In 2006 Kern and his wife sold their company, a manufacturer of portable power supplies. They then spent a couple of days in their kitchen writing — by hand — bonus checks to their 2000 workers. Some received as much as $50,000. The amount of their generosity was never revealed, but it is significant.

Sue Black looked very pleased with this addition to Milwaukee’s sports infrastructure, and she contemplates coordinating some Milwaukee Wave activities with that of its college neighbor. Council President Willie Hines dropped in to chat with Dr. Viets. Things are looking up in the city, but there are still real problems, he said, especially with foreclosures. “The banking industry destroyed us,” he said flatly.

Viets was also surrounded by other MSOE dignitaries and benefactors, including Dr. Eckhart Grohmann, whose art collection fills a campus museum that bears his name. Asked if he has bought any new paintings, the answer was immediately in the affirmative. “It’s a disease,” he says of his expensive passion. Bob Hillis of Direct Supply also paid his respects, as did MSOE Trustee Parmjit (Jesse) Jaspal, PE, who came to the school many years ago from India and decided to stick around. He had nothing but praise for Viets, whom he said was “absolutely transformative” to the institution.

His words were echoed by Nate Zelazo, founder and owner of Astronautics and yet another member of the MSOE board, perhaps the most distinguished such assemblage in the state.

Why is Astronautics located here, and not elsewhere? “Milwaukee is second to none in work ethic,” giving MSOE credit as an exemplar. (He has numerous MSOE grads in his employ.)

“And do you know why I launched Astronautics?” he asked.

“Money was not the object. The object was to advance technology.”

One MSOE trustee received special credit at the event. David V. Uihlein of Uihlein Wilson Architects was singled out by Viets for his work on campus buildings including the Kern Center and the athletic field. The honor was accepted by partner Scott Ramlow.

But the architect was nowhere to be seen. This is not entirely a surprise. The Uihleins are a private clan not much given to promiscuous socialization. So exclusive is their world that it is not entirely certain that they are present at their own funerals.

What About The Old Field?

MSOE soccer players have shared a practice field with a baseball diamond for many years (home games were held on the north side at Uihlein Soccer Park). It is a quaint little corner of downtown immediately to the west of Juneau Village. “That ground it sacred,” Viets said, adding that the long-term plans for the campus include keeping this as open space. The baseball team will have the field to itself, as the soccer players head to their new digs. Perhaps the team will continue its tradition of shirts vs. skins matches. (I always rooted for the skins.) 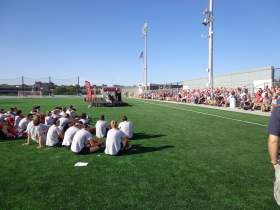 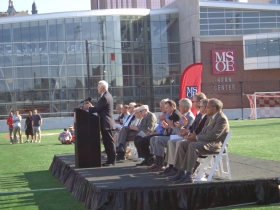 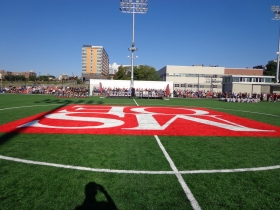 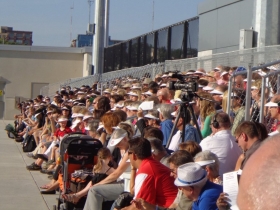 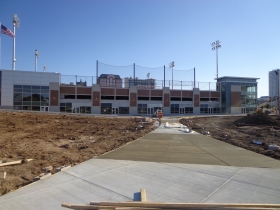 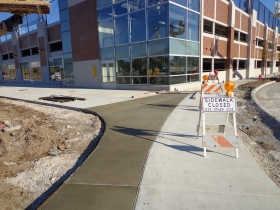 Can’t get enough? We’ve got extensive past coverage of the facility.