A global movement to turn parking spaces into public amenities has spread to the East Side, with a new, curbside dining patio. 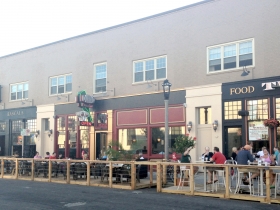 Milwaukee’s first curbside dining parklet was recently installed on the 2300 block of N. Murray St. in front of Davino Wine & Dine and Two Bucks, in the heart of the East Side. Parklets reuse parking spaces to expand the sidewalk and provide such amenities as cafe seating and green space.

The first, unofficial parklet in the US was created in 2005 by the Rebar Group in San Francisco. They refashioned a parking space by rolling out some sod, and adding a tree all the while still feeding the meter. Since 2005 the idea of reclaiming streetspace for a higher and better use has spread to cities around the world in a large part due to Park(ING) Day, which has highlighted the possible uses of parking spots as cafe seating, green space, bike corrals, and for endless other potential uses. This year, Park(ING) Day will be held on Friday, September 20th, and Urban Milwaukee will once again be setting up a parklet on Milwaukee St.

Today, cities such as San Francisco, Philadelphia, New York, Portland, and Milwaukee are actively working to allow parklets as a recognized use of public space. Milwaukee’s first full-fledged parklet extends the seating areas for Davino Wine & Dine and Two Bucks by replacing a former loading zone and two metered parking spaces with a wooden patio. This design provides a simple, affordable way for these businesses to add additional cafe seating.

The ribbon-cutting and grand opening celebration for this parklet will take place at noon, on Friday, August 23rd, in front of Divino Wine & Dine and Two Bucks, 2315-2321 N. Murray Ave.

After running the Bike Czar story, “Biking the Rails Trails,” which featured a group of bicyclists that took the train up to Saint Paul, MN and biked back to Milwaukee, WI, we were immediately called out on twitter by user AsInClarkKent. He wasn’t impressed and pointed us to Milwaukeeans Jeremy and Jamie Ault who are currently on day 49 of their bike ride across the country. They are riding the Northern Tier Route that takes them from Washington to Maine. You can follow their journey on their blog Czech the Line.