The new green roof was installed with amazing speed and could last for 100 years.

88Nine’s new Walker’s Point headquarters is rounding into shape. Just a few weeks ago, the space looked like it had it a long ways to go for a September opening. Today, it looks like it’ll be ready with time to spare. The elevator install is nearly complete, walls are largely in place defining office and studio space, Stone Creek’s new cafe looks more like an actual coffee shop, and a stairway to the roof is having the final railings installed. Plenty of work remains, but the place is buzzing with construction workers. That was particularly true today as the green roof was being installed. 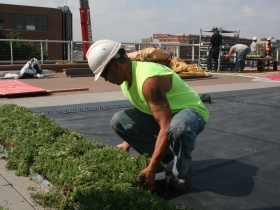 The rooftop at 220 E. Pittsburgh Ave. is being completely overhauled as part of the project. Not only will a performance space be installed with room for up to 100 guests, but a 2,500 square-foot green roof will cover 40 percent of the rooftop. The green roof was being installed this morning, and will be done by the end of the day. Its quick installation is a credit to the process of LiveRoof. The firm, a division of Hortech, Inc, pre-grows the plants in open fields in Michigan. They’re then transported by covered semi-trailer to the site on the day needed, making for a quick, modular installation.

LiveRoof has installed over 800 roofs, with the bulk sold in the Chicago market. Locally they’ve installed about 40 green roofs with clients including Johnson Controls, St. Marcus School, Badger Meter, and Columbia St. Mary’s. According to LiveRoof’s Jon Olson the plantings are expected to last from 50 to 100 years as long as they’re properly irrigated. The plants derive much of their nutrition from the decay of plants in the soil, creating a steady growth stream once the plants are installed. LiveRoof’s system has the added bonus of delivering a lush, green roof from day one, with the pre-grown plants that don’t require extensive landscaping and gardening work.

Radio Milwaukee is taking advantage of a $12,110 grant from the Milwaukee Metropolitan Sewage District which offers $5 per square-foot of installed green roofing as a way to reduce run-off (and ultimately overflows).

The installation today was a model of efficiency. Containers holding modular planting boxes were hoisted up from a semi-trailer on the almost renamed Pittsburgh Ave. From there Schranz Roofing workers picked them off one-by-one and arranged them in designated areas on the roof. By the time you read this, they’ll be long done moving all the plantings into place (which also might serve as a comment on my writing speed).

Fundraising for the new facility is still in process, but carries an extra bonus through the month of August. An anonymous donor has offered to match $2 for every $1 donated by an existing Radio Milwaukee contributor and $3 for every $1 donated by a first-time 88Nine patron. The offer expires on August 31st. Radio Milwaukee has raised $1.6 million to-date

For more on the project, read our prior coverage from July 22nd. 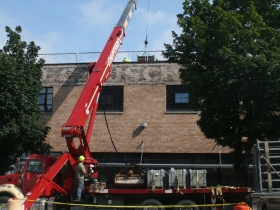 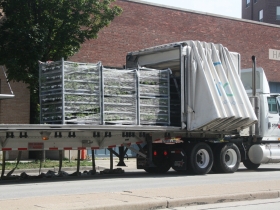 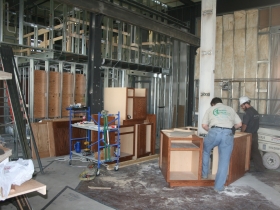 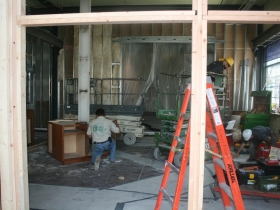 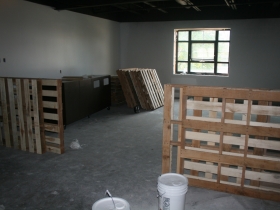 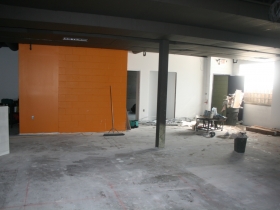