One of the newest radio stations in Milwaukee is poised to grow in a big way. The non-profit 88Nine Radio Milwaukee will grow wings and relocate to a highly visible building in Walker’s Point. The station, which has quickly built a reputation in the Milwaukee area by collaborating with countless other organizations, will move its entire operations into a building at the northeast corner of E. Pittsburgh Ave. and S. Barclay St. The new location won’t just bring new studio and office space to the six-year old station, it will also house a new cafe run by Stone Creek Coffee Roasters and a rooftop performance space that will offer skyline views.

In an industry driven by ego, be it leading singers of bands or on-air personalities, there is a lot of teamwork going into the station’s new home. Executive Director Mary Louise Mussoline was quick to praise both the station staff and board of directors for their contributions to this huge new project. A substantial part of my tour of the new 14,000 square-foot space was spent discussing all the people that are contributing to the effort. On the bricks and mortar side this includes groups like DeMichele Co, which is serving as a volunteer owner’s representative, and project architect HGA to members of the building committee, which includes a number of development heavyweights in town like Robert Monnat of Mandel, Charlie Trainer of TMB Development, Bill Bonifas of CBRE, and Juli Kaufmann of Fix Development. Inevitably, my note taking has left people off this list, but it’s nearly impossible to overstate how much everyone at 88Nine Radio Milwaukee talks about community.

The station currently occupies space in the Milwaukee Public Schools Administration Building and a converted beauty salon across the street. MPS holds the license for the non-profit station, and will continue to after the move (the station will also continue to broadcast school board meetings), but it was time for the growing station to move. Mussoline praised MPS for their support, but noted that two employees have broken their arms falling on the ice as they walked between buildings. Being under one roof is certain to help the station’s 20 employees (17 full-time) grow together as a team. 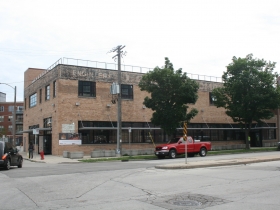 The soon to be home of 88Nine Radio Milwaukee

Starting in 2010, Radio Milwaukee’s leaders began looking for a new location. They were methodical, touring approximately 40 different buildings before settling on the Fifth Ward location. Mussoline described the ideal location as having four key properties: it had to be accessible for their employees, highly visible to the public, in a neighborhood with an identity, and in a stand-alone facility. They found all four at 220 E. Pittsburgh Ave.

The building was built in 1953 as a foundry. Most recently it housed Barclay Gallery & Garden Café (opened 2004), but it has sat vacant for five years. Radio Milwaukee selected Hammel, Green, and Abrahamson as the architect based on their experience with sound design. It probably didn’t hurt that HGA has an office just a few blocks away at 333 E. Erie St. One of the biggest challenges HGA faced in converting the building was installing an elevator to the rooftop, which will ultimately be located at the east end of the building.

The station hopes to relocate to the new facility around Labor Day and will try to do some of it ahead of time. But this is the entertainment business and the show must go on, so a large part of the move must occur over just a few hours to ensure the station can stay online. A similar situation played out recently for the Alterra bakery when operations were moved from Riverwest to the new location in Bay View, with only one shift of downtime required.

Radio Milwaukee will take full advantage of every square foot of space they’re afforded by the new building.  The station presently has three studios, and has live acts perform off-site at the Pabst Pub (at the Pabst Theater) and other venues around Milwaukee. The new facility will have five studios, and two performance spaces each with capacities of around 100. Yes, there will be fewer sneak-peek, noon shows at the Pabst Pub, but many of those shows will now happen on a third-floor rooftop with skyline views.

One unique aspect of the primary studio will be its visibility. Instead of being buried within a school administration building, the studio will be visible from a street that gets considerable pedestrian traffic just south of downtown. Those outside will also able to hear the station from speakers mounted on the outside of the building, but they’re unlikely to be anywhere near the decibel level that the next door nightclub MOCT could reach at times in the summer (it closed a few months ago). To give the DJ’s some semblance of privacy, the station won’t be visible from the Stone Creek inside the facility, despite being separated by just the performance space.

Everyone from project architect Lyssa Olker of HGA and Mussoline to board members and music enthusiasts brims with excitement over the performance spaces included in the new facility. The indoor stage will be located on the first-floor in a space that separates the coffee shop from the studios. Floor-to-ceiling panels will allow the space to be adjusted to best serve groups of different sizes, by closing or opening the panels. Radio Milwaukee intends to also make the space available for community groups to use, as part of their commitment to Milwaukee.

The second floor will be devoted entirely to office space for the station. A convertible space in the middle of the floor will allow a lounge space to serve as part break room, part performer green room. It can be closed off with sliding wall made from salvaged wood palettes (one of many green features in the restored building; others include salvaged barn doors from Plymouth and salvaged Cream City bricks). Similar to the studios on the first floor, the office space has been designed with room for the station to grow, so Radio Milwaukee will be able to call 220 E. Pittsburgh Ave. home for a very long time.

The rooftop of the facility will feature an additional performance space with skyline views. Because of the building’s design, a portion of the roof wouldn’t be able to handle the load from 100 people standing on it, so that space instead will be planted to become a quasi-green roof. 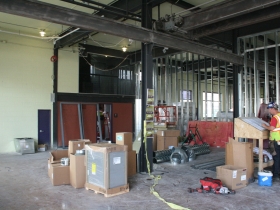 Locally-owned Stone Creek Coffee Roasters will open their second cafe just south of downtown in less than a year, the other completed in December at 422 N. 5th Street in a building designed by legendary architect Daniel Burnham. Burnham is perhaps best known for a statement that Stone Creek and Radio Milwaukee seem to be taking pretty literally, “make no little plans. They have no magic to stir men’s blood.”

Stone Creek will occupy the western end of the first floor of the building. With a cafe around 1,500 square-feet that fronts E. Barclay St., the coffee shop will also take advantage of the existing patio at the building to create a large outdoor seating area along E. Pittsburgh Ave.

Stone Creek Founder and Chief Experience Officer Eric Resch sits on the board, which is likely to draw screams of conflict of interest from some.  However, Stone Creek will be paying market rate for the lease on the space. In addition, Stone Creek will be entering an extremely competitive space with the Alterra Coffee Roasters “5th Ward Foundry” location just a block away on the corner of S. 1st St. and E. Pittsburgh Ave.

While enormous figures are bandied about for projects like building The Couture and restoring The Grand Warner Theater, the new Radio Milwaukee headquarters carries a price tag of $2.8 million. That’s not a small figure to the station, however. Prior to the fundraising campaign for the new building, the largest gift the station had received was $1,000. The building itself cost $1,175,000 to purchase. Fundraising appears to be going well though, with the station having raised $1,584,000 since November, largely from large gifts.

What lies ahead for the station is a concerted campaign to raise the remaining funds primarily through small gifts. To that end, the station has rolled out a website about the project. Look for more coverage from Urban Milwaukee as the grand opening approaches.

4 thoughts on “Eyes on Milwaukee: A Giant Step for Radio Milwaukee”