Why We Lag in Kids’ Dental Care

Study says WI is 2nd-worst state in America. It’s not true, but there are ways we could improve.

The headlines from the Milwaukee Journal Sentinel and Associated Press blared the news that Wisconsin ranks second-worst in America for poor kids’ dental care, according to a new report. The media swallowed the study whole, but it’s quite misleading. While Wisconsin could always do better, we’re nowhere near as bad as the research suggests.

The report was by the Pew Charitable Trusts, and seeks to dramatize the huge number of children who aren’t getting dental care. It estimated that 14 million children enrolled in Medicaid did not receive any dental service in 2011.

The report found that 71.5 percent of Medicaid-enrolled children in Wisconsin did not visit a dentist in 2011, which was better only than Florida, where the figure was 75.5 percent.

Yes, that sounds bad. But study overlooked something that calls into question its entire ranking of the states. The red flag is that it ranks Texas as the state with the lowest proportion (29.6 percent) of children who didn’t visit a dentist in the last year. That’s mostly because Texas lets so few people get into Medicaid in the first place. The maximum family income you can have in Texas and still collect Medicaid is a paltry $4,818. In New York it’s $27,795; in Wisconsin it’s $37,060!

So, for those Democrats who carped about what Gov. Jim Doyle ever accomplished, he greatly expanded Medicaid and BadgerCare. You might call him the Health Care Governor. In just nine months, between December 2007 and September 2008, 42,000 children were added to BadgerCare. William Lobb, Dean of Marquette University’s School of Dentistry, says that by 2010, the number of children in Wisconsin eligible for Badger Care or Medicaid rose from just under 63,000 to more than 166,000, which meant far more children were eligible for dental care.

Back in 2005, 70 percent of Wisconsin children eligible for dental care under Medicaid were not receiving it, as a news story noted. As the Pew Study shows, the percentage was about the same in 2011 for Wisconsin, but more than twice as many children were eligible for coverage by then.

If the Pew study’s ranking of the states is questionable, its general conclusion that many children eligible for Medicaid dental coverage aren’t getting it is undoubtedly true. The reasons are several.

For starters, dentists complain that the reimbursement rates are too low. Dr. Michael Costello, a dentist with an office in Downtown Milwaukee, says when he started practicing 32 years ago, Medicaid covered 80 percent of the cost of providing the care. Today, he says it’s down to less than half of that. It pays for his overhead and maybe half of his staff salaries, but leaves him underwriting the rest. “You can only do so much charity,” he says.

Stephanie Harrison, Executive Director of the Wisconsin Primary Health Care Association, agrees that reimbursement rates can be a problem. “There really is a wide variety among the states in terms of the rates at which they reimburse dentists for Medicaid coverage.”

The Pew study deplored “the relatively small number of dentists who participate in Medicaid, adding that “Dentists cite multiple factors for not participating in Medicaid; chief among them are low reimbursement rates and burdensome administrative procedures.”

But Harrison says another issue is shortages of dentists that can prevent access to care.“There are some areas in Northern Wisconsin where there may be only one or two dentists per county.” She adds that there are “still a large number of people in Milwaukee” who also lack care.

However, Wisconsin’s shortfall could increase, as the Pew study ranked it 7th among states in percentage of dentists (about 45 percent) nearing retirement. “I think that’s going to be a big issue, especially in northern counties,” says Harrison. 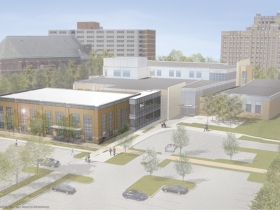 This fall the MU School of Dentistry expects to open its new, $16 million, 45,000-square-foot addition, which will enable the school to increase its class size to 100 students, up from 80 now. Lobb estimates that about 80 percent of the Wisconsin residents and 28 percent of the non-resident students practice in the state immediately after graduating from MU. Even given some retirements by older dentists, “I think over time there will be a net gain in dentists in Wisconsin,” he says.

The lack of dental coverage for low-income children can actually end up costing states more in the low run, the Pew study notes, because “children and adults are more likely to end up in hospital emergency rooms with serious dental conditions that could have been prevented. In 2009, more than 830,000 Americans were treated in ERs for toothaches or other preventable dental problems. For many low-income children, emergency rooms are the only option because their families cannot find a dentist who practices in their area or accepts Medicaid.” The result, the study notes: “These hospital visits exacerbate states’ financial burdens.”

The study suggested that dental check-ups, teeth cleaning and preventive care could be handled more cheaply by dental hygienists, and that there should be more training of these professionals. “By playing a role similar to nurse-practitioners in the medical field,” they could “help bring care to millions of people who live where dentists are scarce. Midlevel dental professionals also can make it financially feasible—and in some cases profitable—for private-practice dentists to serve more low-income patients. Because their salaries are significantly lower than dentists’, alternative providers, who operate under the supervision of a dentist, also offer states a cost-effective approach to address the unmet need for care.”

The study note that this type of practitioner may not be common in the  U.S., but “dental therapists already offer routine preventive and restorative care (such as filling cavities) in more than 50 countries. Research both internationally and in the United States finds that these dental professionals provide quality, safe care.”

That sort of training could potentially be provided by a range of institutions, from voc-tech schools like Milwaukee Area Technical College to universities. And it could lower the cost of both privately and publicly-financed dental care.

-Cities on rebound: A review of recent statistics shows all population growth of last two years in Wisconsin was in urban areas.

-Are Scott Walker’s policies the reason Wisconsin has trailed the nation in job growth in 21 of the last 23 months?

-Did the city need to spend $350,000 on robotic intersection messages that tell us to “wait wait wait” for the light to turn green? Join the discussion.

7 thoughts on “Murphy’s Law: Why We Lag in Kids’ Dental Care”